Joseph Lofthouse grew up on the farm and in the community that was settled by his ggg-grandmother and her son. He still farms there. Growing conditions are high-altitude brilliantly-sunlit desert mountain valley in Northern Utah with irrigation, clayish-silty high-pH soil, super low humidity, short-season, and intense radiant cooling at night. Joseph learned traditional agricultural and seed saving techniques from his grandfather and father. Joseph is a sustenance market farmer and landrace seed-developer. He grows seed for about 95 species. Joseph is enamored with landrace growing and is working to convert every species that he grows into adaptivar landraces. He writes the Landrace Gardening Blog for Mother Earth News.
Farming Philosophy
Promiscuous Pollination and ongoing segregation are encouraged in all varieties. Joseph's style of landrace gardening can best be summed up as throwing a bunch of varieties into a field, allowing them to promiscuously cross pollinate, and then through a combination of survival-of-the-fittest and farmer-directed selection saving seeds year after year to arrive at a locally-adapted genetically-diverse population that thrives because it is closely tied to the land, the weather, the pests, the farmer's habits and tastes, and community desires.
Joseph lives under a vow of poverty and grows using subsistence level conditions without using cides or fertilizers. He prefers to select for genetics that can thrive under existing conditions. He figures that it is easier to change the genetics of a population of plants than it is to modify the soil, weather, bugs, etc. For example, because Joseph's weeding is marginal, plants have to germinate quickly, and burst out of the soil with robust growth in order to compete with the weeds.
Biodiversity
Joseph is preserving the genes of thousands of varieties of plants, but does not keep individual varieties intact or pure. The stories don't matter to him. What matters is the web of ongoing life. For his purposes a squash is a squash is a squash. Plant purity doesn't exist in Joseph's world, other than in very broad ways like keeping hot peppers separate from sweet peppers. Some landraces might even contain multiple species!

Commune living - What's it like?
I love communal living. It's where I feel most alive, most playful, and most connected to myself and to my loved ones. I highly recommend communal living. I have lived in amazing places, with amazing people, doing awesome things.

I'm not willing to share further details about my communities or experiences.

Photos of Joseph Lofthouse's Garden
I attended the Utah Farm and Food Conference this weekend. People in attendance got access to every variety I grow for which I had sufficient seed for sharing. And bottled food that I have sang and danced for since it was still seeds, and every step of the process since then, including growing, irrigation, weeding, harvest, and processing... 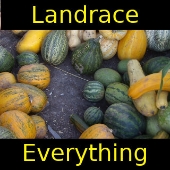 One Solution to the Crisis: Landrace Everything
I see epistasis commonly in my plant breeding. That is where it takes multiple genes for a trait to show up, and every gene has to be present. So if each parent is missing even one of the required genes the trait is absent, but if the offspring manages to get a complete set then the trait is present. Two  of the corns I used to grow were that way. Each variety was missing one of the genes in the purple color pathway, therefore the corn seeds were white. But when the two white parents were crossed, some of the kernels had both of the required genes and therefore were purple colored.

And with that analysis, i'm ready to propose a mechanism for how color might show up in the maternal-seed-coat-tissue of a white bean seed. Supposing that the white seeded mother plant is missing only one gene for making a precursor in the chemical pathways necessary to make color in the seed coat. Then, the missing precursor chemical shuts down the whole color pathway leading to a white seed. What if the embryo, contained the genetics for making the precursor chemical? What if that chemical was water soluble and released into the plants sap? Might the maternal seed-coat cells take up that precursor chemical and plug it into the otherwise fully functional color pathway?  Perhaps the concentration of the precursor in the sap would be less than if the cell had made it's own precursor, thus leading to a pastel colored seed.

I think this mechanism might very well be active in some cases. We know that capsaisin escapes from sweet pepper embryos pollinated with hot peppers. Other seeds probably behave in similar ways with other chemicals.

And we are not limited to white seeds. Colors are complicated with many different pathways converging to make particular colors, and if a precursor chemical is missing, then different output colors can be generated.

One Solution to the Crisis: Landrace Everything

Mark: An issue that confounds the selection criteria of examining one plant or pod at a time, is that it's possible for the seed coat of beans to undergo what I call a "reversal" in which the colors on a bean are switched, but it is not a heritable trait. If I plant the reverse-colored seeds, the plants revert back to the normal color scheme in the next generation.

This can be seen in pinto beans, where most of the beans will be light beige with dark brown speckles, but 2 or 5 beans per pound will be dark brown with beige speckles.
show more
1 week ago
permaculture
Can squash varietes (ie., pepo, maxima, moschata etc) cross-polinate / hybridize?
In the decade that I have grown thousands of pepo, maxima, and moschata close together, I only found one naturally occurring inter-species hybrid among the offspring. The 7 seeds that the plant produced did not germinate. Therefore the cross might as well have not happened.

Tetsukabuto is a commercially available hybrid between maxima and moschata. It breaks down the species barrier. However a lot of careful observation and hard work went into that. It didn't happen spontaneously.

Moschata can act as a pollen donor to mixta. I find mixta/moschata hybrids in my garden on a regular basis.  I interpret that to mean that moschata and mixta are not quite separate species.
show more
1 week ago
seeds and breeding

One Solution to the Crisis: Landrace Everything
Lauren: Thanks for your observation that sometimes crossing can show up in the first generation of bean seeds. If we can learn how to leverage that observation, it would really speed up and simplify bean breeding. I have parroted the meme that you can't notice bean crosses in the first generation. Most of my work has been refuting Internet wisdom, so I made a plan to test this idea in my own garden, with enough pictures/video to fully vet the process.

Because white is the most neutral color, then it's easiest to notice if something is off-color in white seeds. This coming growing season, I'm intending to plant a row of alternating white beans and colored beans. And then to harvest the white beans one plant at a time, to look for individual seeds that are F1 hybrids. I suspect that I'll further open them one pod at a time, so that i don't inadvertently include pods from the colorful seeded plants.

In crosses between wild tomatoes (small seeded) and domestic tomatoes (large seeded) differences in seed size, shall we say in the F0, are discernible between crossed and uncrossed. I suspect that a shape/size difference would also show up in crosses between different sized/shaped common beans, if someone where willing to look closely enough at them. Hmm. Small round beans vs large flat Kidney beans?

If sweet peppers are pollinated by hot peppers, the capsaisin can be tasted in the F0 seeds, and sometimes in the placenta or fruit in general, because capsaisin in soluble in the sap and can diffuse into the rest of the seed.

In my garden, I figure that by preferentially planting the naturally occurring hybrids, that I'm selecting for a population that is more susceptible to cross pollination.

I had enough seed for distribution of the varieties I mentioned above, and the population of Solanum habrochaites which were the ancestor lines of this project, AND I released a population which consisted of anything from the elite field which managed to produce fruit. Here's the description:

This incredibly diverse population is descended from crosses between domestic tomatoes and two wild tomato species (Solanum habrochaites and Solanum pennellii). These are part of Joseph's Beautifully Promiscuous and Tasty Tomato Project. This is an amazing assortment of genetics. Leaf shapes can be anything from potato-leaved, rugose, regular-leaved, habrochaites-leaved, fern-leaved, pennellii-leaved, anything in-between, and other shapes. Fruit color might be green, pink, red, yellow, orange, white, or purple. Mostly cherry to saladette-sized tomatoes. Plant size varies between dwarf and monster, with vines that are determinate, indeterminate, or semi-determinate. These are a mix of self-compatible and self-incompatible plants. We are beyond excited to release these seeds because of the tremendous amount of diversity they carry. There are all sorts of paths that your selection and breeding might take.

Some of these may be immune to tomato blights. Joseph would love both good and bad grow reports, especially from areas in which tomatoes are nearly impossible to grow because of diseases or pests. He’d be particularly interested in getting seeds back from any that are grown untreated in a garden with terrible blight problems where they survive as if the blight wasn't even there.

As these are descended from inter-species hybrids, germination may be erratic.

Have fun!
show more
1 week ago
seeds and breeding

Experimental Farm Network is distributing my seed varieties this year. That frees up my time for learning, teaching, travel, writing, and generally being an elder. They are the near exclusive provider of the seeds that I grew on my farm. Their catalog went live today.

Other places which carry some of my varieties include: 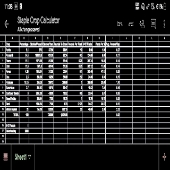 I do not rotate crops. I consider pests and diseases to be a blessing in my garden. Because they help to select for stronger, more resilient plants.

I often plant cucurbits, or pulses after corn, but that's only because they are large seeded, and thus better able to handle the large sized detritus left by the corn stalks.
show more
2 weeks ago
gardening for beginners

One Solution to the Crisis: Landrace Everything
One year, I direct seeded something like 10,000 pepper seeds. Alas, none of them grew faster than the weeds, and all were lost.
show more
3 weeks ago
permaculture