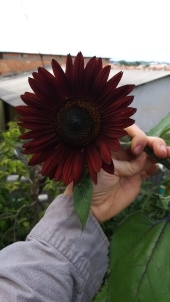 Trish Doherty wrote:Mostly, once the night temps are warm enough, the sun is already too harsh for the seedlings.  And trying to keep the soil consistently moist enough for germination is difficult. It dries out in a flash.

Trish, when direct seeding, I've found that scattering light mulch over the soil helps the seeds stay damp enough to germinate. of course not enough much to shade the seeds when they come up, just a scattering of something straw-like, usually in my case old stems and bits. but not whole leaves, even dried up ones, because they'd shade the germinating seeds.

About direct seeding versus transplanting: last summer I started one tetrapak each of winter squash, with two seeds in each. I started them in April and transplanted out in May when it was warm enough. At the same time I planted out, I also direct seeded some.

The Lofthouse Maxima that was started indoors produced 5 large mature squash for a total of over 20 kg, like 50 lb. Plus one or two smaller immature ones that I had to take in before first frost. The kabocha produced 4 mature and two immature squash before frost, but they were all under 2 kg each.

The 5 direct seeded Lofthouse Maximas produced only one mature and one immature squash each, and all but one of those were much smaller than the 5 fruits on the single transplanted vine.

So I've very happy to continue starting the winter squash inside 3 or 4 weeks before they can be planted out. I plant them in one-liter tetrapaks, filled with half sand and half compost, rinsed by draining through with fresh water a couple of times. At planting out time, I dig a hole deep enough, then stand the tetrapak in the hole and carefully tear away the tetrapak. I haven't lost a single plant I've transplanted this way. Usually both seeds have germinated and then survive transplanting so I have to thin later.
show more
1 day ago
gardening for beginners

How much uncomposted manure can be added to soil?

zurcian braun wrote:Ooo also, Rebecca, do you know Jason and Kaitlyn?  They're friends of mine who were shepherding in Ladakh.

I'm sorry, I didn't see this till today. Yes indeed I know Caitlin and Jason! And they totally helped me build my garden beds!! Jason did the stone masonry for my raised beds, with Caitlin and I bringing him the stones. And he also removed lots of stones from the garden in my picture above. I admire them hugely. They really walk the talk more than almost anyone I know, and best of all, they're not smug about it.

And back to the topic at hand. I got another load of desiccated cow dung this year in the early spring and it was so much that some of the beds basically be dug down 6 to 18 inches and just filled it with cow dung that we'd piled and watered for a month or two. I was afraid it might turn out to be too rich but in fact the garden loved it. Tomatoes, winter squash, even beets and basil and broccoli all thrived in beds that I'd worried were too rich.
show more
1 day ago
soil
Help me understand vegetable water needs

L. Johnson wrote:I know some plants, like tomatoes, don't produce as good flavor if you over water them... how much is that true for things like cabbage, chinese cabbage, daikon, komatsuna, and even lettuce?

And some plants, like arugula / rocket, taste a lot worse if they are suffering from water stress!
show more
2 days ago
gardening for beginners 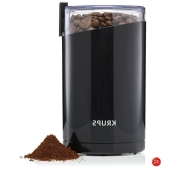 Discovering the Joy of Powders
Ooh! Powdered tomato is so useful! I dry it bone dry in Sept-Oct during tomato season, but it does clump up if there's humidity and condensation, which there often is in my solar heated house in winter. Powdered dried apricots do the same.

I mix it with powdered red chillies, nutri-yeast and salt to make an addictive popcorn shake (really much like the addictiveness of doritos).

And my housemate, who first experienced real salad at my house and learned to love it, discovered instead of making a vinaigrette, he can make instant salad with dressing, by drizzling olive oil from our preserved garlic confit, a few pieces of the mild garlic, and a shake of tomato powder, over fresh green leaves from the garden.

Powdered dried eggplant is oddly sweet and yummy in a way I never noticed in fresh eggplant. I use it occasionally to thicken a meat curry.
show more
2 days ago
food preservation 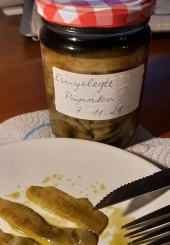 John F Dean wrote:It is not a style of lid I have used before.

The screw-on type jars are commonly used in Europe. We have used them without problems for over 20 years. The type used in the US isn't available here.

Yes, India too. The type of lid shown above is the only type known here in India, including products imported from Europe. I've canned thousands of jars of jam in Indian-made lids of this type, even ones without a raised button that pops up when the seal is broken. We've had maybe 1 in 200 fail, but we are reusing all our jars and many lids, and the process is done by a crowd of teenagers, new kids every year, so it's not as precise as one might wish (which is why I've only taught them apricot jam and tomato products).
show more
5 days ago
food preservation

What did you do to make your neighbors think you are crazy?
Mulching. Nobody in my region mulches, and if they've heard of mulch at all it's the govt agriculture dept encouraging black plastic mulching. And organic material is hard to come by here so I go out and cut mulch from the weeds along the stream bed and bring them back to my garden, and clip up all my garden waste too. I'm sure the neighbors think it looks a mess, and in fact it looks so awful the them that they usually don't even ask about it. I mean, like asking about your acquaintance's divorce, it's just something polite people don't comment on, I think.

Also, every farmer neighbor who visits suggests that I need to just till up the whole garden every year. When I say no, I think the mulch will improve the soil and keep it soft, and anyway I've got exotic perennials like asparagus, black currants and daffodils in the garden... well, I don't think even one of them has ever been even slightly convinced.
show more
6 days ago
meaningless drivel
Seeking nettle recipes
Okay, I do a unique thing with nettles. I make a bright orangey-red popcorn shake by powdering dried tomatoes, red chillies, salt, and if I have it, nutritional yeast. It's known in my friends circles as Becky's special popcorn masala.

But for variety, and because some friends don't want the spicy stuff, I make a green popcorn shake too: I powder dried nettles, dill, salt and dried chives (or garlic powder). Wow! The color is vibrant and it tastes good, though the nettles are just a neutral flavor filler and mostly provide color.
show more
6 days ago
cooking

Botulism in preserved vegetables?
For this reason, I preserve non-acid vegetables by drying or fermenting, and not by canning. I save the canning for tomatoes and fruit. Well, this reason and also because my climate is so dry that dehydrating things is dead easy.
show more
6 days ago
food preservation 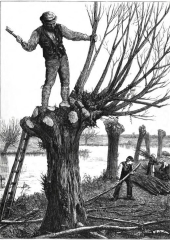 What would you do? Large Trees Near the House
Willows and poplars do fine cut off at 4 to 6 feet high for pollarding. It's a common practice where I live. But I don't know if maples or oaks would do well with that. You're not inclined to do it anyway, so never mind.
show more
1 week ago
home care 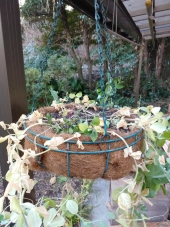 Today I ... (The Digital Pat on the Back Thread)

L. Johnson wrote:Yesterday, I put Coco coir in the last remaining hanging basket so that I can use it for plants. I had three that were left here, but no pots that fit. Cutting the coir to shape was tedious...

How do you use it in your pots? Is it a liner in a mesh basket, instead of a pot? Or in the bottom of pots for drainage? Or what? I've got a crate of coconut coir that a South Indian housemate pulled off whole coconuts in order to cook last year. I put some in the worm bin because I'd heard worms love it, but it doesn't seem to have decomposed at all. So I'm curious about other uses for it.

Today I checked the stored winter squash (pumpkins) for damage, and found that one of the little Japanese kabochas was going moldy. So I cooked all three in chunks. Forgot and left them in the oven too long, so it's quite dry and very sweet. Half I pureed with some homemade yak bone broth I had, and kept the other half in chunks. The Lofthouse C. maximas, on the other hand, are still in perfect condition, so I think I'll only grow those next year.
show more
1 week ago
meaningless drivel