Overwintering Runner Beans
I've got one plant which has overwintered for a few years now, in place.  It's in a fairly sheltered spot next to a fence, so also a little drier than the surrounding soil (all its original neighbours didn't make it though).  I did dig some up, store, and replant the one time, but they didn't really perform any better than the ones from seed.  More experimenting, maybe?
show more
1 week ago
gardening for beginners
Pricking out, potting on? Benefits?
I do this with most of my seedlings;  I can't direct seed most of the time because the slugs and bugs massacre them and sowing a bunch at once into one tray saves me time and space.  I generally will just prick out into a similar seed tray, spaced evenly, and then plant out from that tray once big enough.   I've noticed that my pricked out seedlings grow larger than ones grown directly in modules, which I now no longer use.
show more
2 weeks ago
propagation

Learning to love liver (resolving iron-deficient anaemia)
For my birthday this week my husband cooked me a massive steak--like 32 oz--and I finished it all.  Was almost as good as the liver

Cajun rice.  I brown off some chopped. celery, pepper and onion with sausage or kielbasa. Add garlic and Cajun seasoning.  Add minced liver and giblets (I prefer using the organ meat from my chickens in this but have done it with other animal livers. The stronger the live type, the more sausage and seasoning I use to hide liver taste). Add cooked rice and parsley. Salt to taste.

That sounds tasty;  I might have to give it a try.
show more
1 month ago
food as medicine

Learning to love liver (resolving iron-deficient anaemia)
On the rare occasion we have giblets--either from a bought turkey or from our own chicken--I mince them raw as finely as possible and then stir them into the gravy at the last minute, allowing them just enough time to cook, but not letting them simmer.  I notice the texture of them, at least a little, but not the taste:  just tastes like gravy.

I think it may be a little late for my ten year old son to convert to liver, but I've started early with my 9 month old daughter;  she enjoys having a few bites of mine when I make it 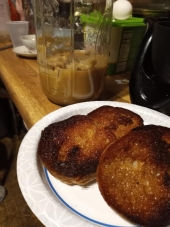 You're telling me there is a market for fat?

Flora Eerschay wrote:Thanks! I'll try with sheep fat tomorrow, and maybe with beef fat later too. I now remember that the rabbit I had a few months ago had its fat in unusually hard clumps... could that be melted too?


Definitely.  I didn't realise there was enough fat on a rabbit--I'd be interested to hear what it's like.  To my taste, sheep fat is kind of strong but I still like it.
show more
1 month ago
pigs 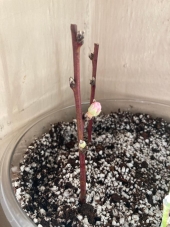 Leah Holder wrote:If anyone is listening and has a few minutes, could you tell me at what stage in leaf growth I should uncover these guys? Thanks!


If they are putting out leaves, I would uncover them now.  Keep them out of direct sunlight at first too.
show more
1 month ago
fruit trees

What is invisibly mended cloth? (and how to do it)
I think perhaps another reason it's no longer widely done, is that a lot of modern clothing is made much more cheaply (as in poor quality) and is not worth mending.  Although I buy almost all my clothing secondhand, or make it myself, I remember browsing in a mid-market fast fashion shop several years ago, while waiting for a relative to conduct some business nearby.  As I was looking at the dresses on the rack, I noticed that many of their seams were so poor they were already coming apart, while still on the rack!  How can they justify charging £40 for a dress that's already coming apart at the seams before you even buy it?  But that's the reality of modern clothing, or at least the kind of clothing that most of us can afford to buy.
show more
1 month ago
repair

You're telling me there is a market for fat?

Flora Eerschay wrote:How do you render beef fat? I'm waiting for beef and I'm wondering now if I could ask for the fat too... I mostly used vegetable oils so far.


I chop into small pieces and either bake it (covered) in the oven for about an hour, or just dump it all in my hotter slow cooker for about six hours;  I have a not as hot slow cooker that doesn't work as well--the cracklings don't go brown and crispy in that one, but the fat still renders ok.

We like to generously salt the crackling bits and eat them hot like popcorn.  I like them even better when they're cold and greasy :)
show more
1 month ago
pigs

(And I traded a gift bag of my assorted cookies with my neighbour who is a hobby chef and I got some ham smoked by himself, a cheese cream and marinated herring)

Wow you got a good trade!
show more
1 month ago
meaningless drivel

You're telling me there is a market for fat?
Our local butcher gives us a bag of beef fat every week, for free (free with our weekly shop, that is).  We render it and use it as our go-to cooking fat and I prefer it to other oils/fats with the exception of possibly duck and goose fat.  I have also made birdseed balls, candles and soap when we run out of containers to store it in--though after rendering, it does keep several months if not longer.  He doesn't give away the pork fat though;  I'm not even sure he'd sell it--it goes in his sausages.
show more
1 month ago
pigs