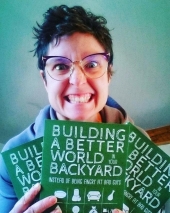 how does a shy person give away 12 copies of the book "Building a Better World in Your Backyard"
Various 'free-cycle' websites,  local community emailing lists like next door or old school mailing lists.

With the current pandemic most of my go to solutions havn't been.


I would tend to leave a set of permaculture playing cards when I went to someones home, or traveled somewhere.

I figure leaving a permies book next to a Gideon's bible might be just fine.

Coffee shops was mentioned.  I'd second that... if there were coffee shops to lounge in.

Diners and donut shops sometimes have a spot for the daily papers...

I think waiting rooms of various kinds might work.  Any place that has a People magazine is fair game.


show more
1 week ago
tinkering with this site

For Mid tiers, PDFs for printing them yourself.

For higher tiers include a fancy recipe card holder box?

Are there any build pictures of the new 4 inch system in the red cabin?
show more
2 months ago
paul wheaton's permaculture podcasts

how do we get more backing of the brk?

Boot lace fund?
show more
3 months ago
tinkering with this site
How to obtain your own salt

How does one obtain salt if Peak Energy hits and we have a sudden, dramatic collapse of civilization and its systems of production and distribution?

'we' as in humanity or 'we' as in you and me as individuals?

'We' as in individuals can preposition a life time of salt for ourselves and our families.   Depending on your source, depending on what you are doing with it and if it can be reused / cleaned up.  I figure a tablespoon / day.  ( mostly for food preservation, a tablespoon / salt per day is a bit much for consumption, but a few table spoons will go into a brine for that turkey.  and it's probably way high. ).   Call it 20 g a day,   About 16 lbs a year. 160 lbs / decade.   1600 lbs per lifetime.  that 1600 lbs of salt might take up about 3x 3x 4 ft in space. Depending on things.  Packed into 55 gallon drums it'll last for your lifetime.  One would probably pay more for the packaging than the salt it's self if one buys in bulk.  ( rock salt is $250 / 2000 lbs )   Maybe get a nice old refer container ( air tight , water tight, with insulation) and keep a whole mess of long term storage stuff there, a lifetime of garden fertilizers, honey,  animal salt licks and mineral supplements,  grit for the chickens,  maybe a few cans of various fasteners for building stuff later, salt.... diatomaceous earths... that's all I can think of at the moment. ) .


'We' as in humanity.  Utah.   the Utah salt mines and solar electric mining equipment.   Mining a ton of salt doesn't take to long with the right diggers.  There's no reason they need to be running diesel.  Sure it might cost 3 times as much in power costs... 3 times basically 0 is still basically 0.  The south has brine wells, and salt domes that are mined out as well.  Solar panels or hydro power electric can work for a long time with low maintenance.  Distribution by electrified rail.   Salt doesn't go bad, so it can be slow and efficiently moved.


'We' personally have a few years supply of salt around, well... because it seems like a reasonable thing to do and I like corned beef.... probably like it too much.

how do we get more backing of the brk?


The question is:  how do we get more people to reply to the thread and offer up a few bucks?

Tithed badges?   " I didn't do a sand badge but I helped 20 people get theirs. " sorta thing? Not  necessarily monetarily.

Pay it forward sort of things?  I'd start it going by donating a hammer, if the user of that hammer would donate back two when the work up to it.   I'm not sure how to word smith that together right.   Maybe plant a seed so that all may enjoy the fruits of our labors.

And it sounded perfect, but the image after the link was broken... and the domain is no longer resolving... etc.


There are a few UI things that could possibly help people get to the right place.

1)  Call out broken external links specifically.   There is probably enough umph in JavaScript to figure out when a resource doesn't load or a request to the hosting sites root fails at least.   ( doing it in JS avoids backend complexities )

2)  When a link shows up as broken, point people to the internet archive page for what was there ( e.g. : https://web.archive.org/web/*/http://www.lakeoftheozarkspermaculture.com/rainwater-harvesting/water-treatment-rainwater-harvesting-wom/  )  with a  quick howto as to how to use the wayback machine.   E.g. Look for green dots, and scroll back on the yearly timeline to find more dots.

3)  To insure that the archive is populated.   Forever external link (heck for every link), attempt to register the page to be saved in the archive.   ( e.g. https://web.archive.org/save/http://www.lakeoftheozarkspermaculture.com/rainwater-harvesting/water-treatment-rainwater-harvesting-wom/ )

Thank you for the consideration and time.
Especially if #3 is already being done.
show more
4 months ago
tinkering with this site
Will bears break into a log cabin? bear proof chicken coop

For what it's worth :

Construction of a "bear proof door" , though I'm guessing that the other commenters were completely correct and if a bear _really_ wants to get in you'll need to up your game quite a bit.  Possibly take bear proof trashcans as an inspiration.

Bethany Dutch wrote:The other day I got to chatting with my Dad about a few different predictions about climate change, etc.


We don't have an adequate substitute for oil just yet. We have a few potentials, and maybe some things that will work on a small scale, but nothing on a big scale.

What would life look like for the people who are left? How long would it take before civilization would sorta somewhat recover? Or would it ever?

The Hubbard curve is a real thing : https://en.wikipedia.org/wiki/Hubbert_curve ,

If you'd like to look at a post petrol plan, look at  Jeremy Rifkin's  The third industrial revolution ( https://www.foet.org/books/the-third-industrial-revolution/ ) and zero marginal cost society https://thezeromarginalcostsociety.com/ .

Or read Paul Wheaton and Shawn Klassen-koop's building a better world in your back yard ( https://permies.com/w/better-world  )

Elan Musk forced the auto manufacturers to go electric by building a better car.  Trucks and farm tools are next.

Most of the arguments around "we can't without oil" or "an adequate substitute" is really PR from the involved industries.   A more correctly stated version might be "There is no adequate substitute that is cheaper, and is already done for you without any effort on your part... keep buying our oil!".

Coal / gas and petrol.   it is currently cheaper to decom a coal plant and install wind power than to simply pay for coal shipments.    Gas power plants are being shut down and replaced with battery farms.  we are well on our way to the electrical systems being off petrochemicals.  The rest of it is a question of gumption and pricing rather than technology.

For some insight into the entire collapse issue, one can look into the Seneca Effect / curve / trap. ( http://thesenecatrap.blogspot.com/ )


The short answer is diversify and understand where one is on the curve.

Note, we didn't run out of whale oil because we ran out of whales. We stopped killing whales when they got rare enough to be cost prohibitive compared to this new thing oozing out of the ground ( only some what true, but a good start) .
..


The scarcest thing about the end of oil isn't the oil.  It is the end of the Petro-Dollar.   This is _very_ important.  The USD is the defacto world currency, and the  US gets away with lots of shenanigans because it can just go and print more money when every other country in the world can't ( technically its more complicated than that... but not by much ).


I can't tell you exactly what'll happen or how it'll go.   ( and with an Iranian conflict possibly rising up and blocking the straits of Hormuz
( https://en.wikipedia.org/wiki/Strait_of_Hormuz , maybe we'll find out about that sooner rather than later.  )   There are general responses and planning that we can individually do that will decrease the suffering around the time that it happens.


e.g. Permaculture!    Gert doesn't much need to care too much about outside inputs ( https://permies.com/t/gert ) .    If everyone were Gert'n through life, we'd be much less effected by monetary system changes.

Way to long, sorry about that.