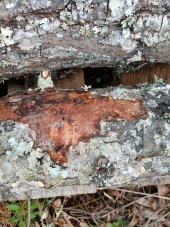 mushroom log plugs eaten/removed by wildlife
I inoculated a couple of logs with oyster mushroom dowels last year. Almost strait away I noticed that birds were pecking out the wax, I assume looking for insects underneath since it was paraffin wax and not edible.. I ended up having to cover them in netting. Only some of the holes were pecked out so I just left it and sprayed with water a bit more often. They still haven't fruited but there seems to be plenty of mycelium covering the bottoms when I have looked.
show more
7 years ago
fungi
Black solider fly in the uk
Thanks Mark, I'll post on here when I get round to starting them off.

Wenderlynn, I have looked around and there are some uk native relatives of BSF, some examples on here, so that mite have been what you saw. I have been keeping an eye out this year but have still to spot one in my garden and I dont know if they have the same behavior.
show more
8 years ago
bugs

Kylie Harper wrote:I have been doing water-only rinses as my hair care (plus brushing) for 6 weeks now. Works great.

It is shiny, full, and holds really well in a style without any product. I am still getting used to the "new normal" of slightly oily hair. I think my hair looks great, but is odd to touch. Just a matter of getting used to it, I think.

If you've only been doing it for 6 weeks it probably hasn't completely stabilized yet. I would have thought that your hair will loose that oiliness if you keep it up. I know mine went through that stage. Your right it does look good, really full and shiny, but is still a little greasy. At least in my case that passed after a couple of months and now my hair looks and feels completely normal.
show more
8 years ago
personal care
Black solider fly in the uk
Thanks for the info

I have found uk suppliers of BSF for reptile food and they are not too expensive and I have a couple of small greenhouses so I could give them a try in one of them. At least there wont be a risk of them escaping. Even if I have to buy new ones each year to restart them it wouldn't be that much trouble.
show more
8 years ago
bugs
What to do with a lot of fresh horns?
You could try using them to make biodynamic horn manure http://www.biodynamics.in/BD500.htm. I've never tried making it but I've heard people say grate things about it as a soil conditioner.
show more
8 years ago
organic
Black solider fly in the uk
Hi, I'm wondering if there are any people in the uk or northern europe keeping Black soldier flies? If so were there wild flys you were able to attract or did you have to buy them, do they just survive, thrive or die? I'm really interested in giving them a try to supplement my chickens diet but I cant find any uk info on them so im not sure if they are viable. And if I have to buy them is there any risk of introducing a foreign species that mite impact on other native animals?

Burra Maluca wrote:I suspect that the health and safety stuff was because the people in the experiment were workers rather than volunteers. The UK is a bit anally-retentive like that.

I imagine it was more to do with insurance issues than laws. You have to remember they were wearing period clothes, shoes and bedding. They could easily have ended up with trench foot, pneumonia etc, witch could cost money to treat and have interfered with filming.

But yes I watched this when it was on TV, its a very good series. Very realistic and done cheerfully and with enthusiasm.

They also did A Tudor Feast at Christmas, Victorian Farm and Edwardian Farm witch were also very interesting. As well as a spin off, Victorian pharmacy.
show more
8 years ago
dvds, movies, videos and documentaries
Ecovative design - mycelium based technology & products
I saw this video about that a while ago. http://www.ted.com/talks/eben_bayer_are_mushrooms_the_new_plastic.html

Looks like a really nice idea, I hope it is successful. I've Stanly noticed a big increase in biodegradable packaging, its only the big expensive things that seem to come in polystyrene now. So there does seem to be a market for something like this.
show more
8 years ago
fungi
Fukuoka believed organic food should be cheaper than commercial food. Is this possible?
From what I understand the reason organic food is more expensive in the shops is because its more expensive to produce, it's that simple. I think there are a few reasons. Traditional organic farming, unlike permaculture, still requires quite a lot of inputs. Weeding, tilling, spreading manure and other composts, most of which needs manual labor and that costs money. There's also the fact that they tend to be smaller and more diverse which means they dont have the economies of scale you get from a couple of people farming hundreds of acres of the same crop from atop big machines. And then there is the fact that in most cases acre for acre organic doesn't produce as much as conventional, so if there are two farms of the same size growing the same things the organic one will have to charge more for his produce than his neighbor to get the same income.

Also, on top of the active subsidies big farmers can get there are the unseen costs which most farmers probably dont even know about. The damage to ecosystem services like water purification, soil stabilization and carbon sequestration etc, which once damaged need to be replaced by human intervention at huge cost. If they were paid for by the people that caused them conventional farming as well as a few other industries would see there costs go up quite a bit.
show more
8 years ago
farm income

Strange nettle reaction in Microwave!!!
I believe the microwaves used in microwave ovens are quite big. Somewhere between 10 and 20 cm. Thats what I've heard but also backed up with experience. When we bought our new microwave oven with a regular oven built in I tried baking a cake in it. Half way through for some reason it decided to switch from oven mode to microwave mode and cremated my cake. The interesting thing was that because the cake wasn't turning it didn't get heated evenly and when I cut the cake in half there was a lovely wave form with chard cake on one side and half cooked on the other. The wavelength was around 15cm as I remember.
show more
8 years ago
cooking