nettle recipes?
I went to the store and what did I find in the vegetable section but stinging nettles. Now I had the chance to see what they taste like. Pretty good. More substantial than cooked spinach ... kinda crunchy in my eggs. I cooked them slightly first, but didn't steam them. Then I added the eggs. Yum.

I don't think I would like fuzzy. I don't particularly like peaches with fuzz ...
show more
11 years ago
cooking
aphids on house plant
The plant was brought into the house because it was too cold outside for the plant to survive. Afterwards the plant was found to be covered with aphids. Some of the worst infested parts of the plant were removed and thrown out.

I wonder if someone knows how to get rid of the aphids without killing the plant.
show more
13 years ago
bugs

a small change in drinking container shape -> cheap housing
Would you care to describe it? I'm getting
HTTP Status 404 - /Concept/porfolio/06/07ha/B017UB.htm
show more
14 years ago
natural building
urine is sterile, but ...
Urine is normally sterile while it is still in the human body (except when you get a urinary tract infection -- a UTI). However, it is a very good media for bacteria, so once it leaves the body, bacteria thrive on it. This is why, if you don't flush after you pee, the water begins to turn cloudy and smell pretty rank after a couple of days (even without fecal matter). After you flush, most likely you'll see a ring of slippery "scum" left on the toilet bowl ... frequently a pink one. I'm not talking about white mineral rings left by hard water or well water iron-colored mineral rings.

Urine contains waste products from the body like creatinine, urea (a source of Nitrogen), uric acid, and other minerals (like Sodium, Potassium, Magnesium, Phosphorus) which are soluble in water as salts. Normally there is minimal Protein and/or Glucose.  Bacteria from the environment love these nutrients.

Typical bacteria which may invade the urinary tract are Escherechia coli, Pseudomonas species, and Klebsiella species, and Bacillus species.  Staph and Strep may also show up, although UTIs with these bacteria are less common. All of these are common in the environment. You very probably have some of each of them on your skin right now (when was the last time you washed your hands?).

The chemical formula for Ammonia is NH3 ... the 'N' stands for Nitrogen. The bacteria change the Nitrogen salts to ammonia. The urine pH changes from neutral to alkaline. Other bacteria oxidize the ammonia.  Some bacteria like cold, some prefer hot temperatures; some prefer acid environments, others prefer alkaline environments.

old-fashioned cookstove
I think it depends on where the rust is and how rusted it is. If the rust is on the top of the stove and not completely rusted through, it probably isn't a big deal. If the rust has weakened the area that will contain the fire, you'll probably want to replace that area entirely, whereas if it is just surface rust, it will probably be fine for at least a few years.

show more
14 years ago
cooking
The Story of Stuff
http://www.storyofstuff.com/
A 20-minute, fast-paced, fact-filled look at our production and consumption patterns and calls us together to create a more sustainable and just world. 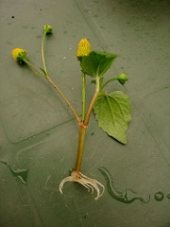 toothpaste alternatives
Last time I went to the dentist, I was complaining how the toothpaste made my coffee taste bad and was told that toothpaste doesn't do much except freshen your breath. The brushing (and particularly flossing) is much more important than the toothpaste. Over the years I've used baking soda and salt as well as various toothpastes. Currently when I wake up I'm brushing with only water on the brush. In the evening I use the toothpaste.
show more
15 years ago
medicinal herbs

organic war on fleas!
If you can get the media on your side, they can be very persuasive.
show more
15 years ago
bugs

I'm not sure of the details. I've never done it myself.

Rather than repeat things here about hair testing, please read this thread.

I think that hair analysis is usually used for heavy metals. I haven't heard of it being used for chemicals like pyrethrins or butoxides.
show more
15 years ago
bugs