Feeding Out Round Bales

posted 4 years ago
Here are a few pointers I have found over the years feeding out round bales to sheep.

Every round bale ring or design I have tried to feed my sheep has utterly failed; and I tried a lot. The lambs ultimately get on top of the bale and crush it and cause a lot of waste. It sucks...it really sucks...but we unwind our round bales and hand feed them into managers. This greatly reduces waste. (Did I mention this aspect really sucks, but it has been the only thing I found to make waste minimal?)

I have a lot of sheep, yet I don't have a bale spear because...well I am cheap. Why spend $300 on one when other ways work. Here are a few ways I move round bales:
1. Chain the bale to my front bucket on my tractor
2. Run my winch line around the round bale and then "suck in the cable" so it squeezes the bale. The winch line is hooked back onto the winch.
3. Chain the bale to my bulldozer's blade. The 10,000 pound machine does not even know its carrying that 600 pound hay bale
4. Use my log trailer to load two bales (my typical and easiest way)

Move round bales as little as possible. Disturbing them can cause spoilage issues.

I see little reason to build a hay barn at $3 a square foot for hay bales that cost $35 apiece, therefore mine are stored outside. It took me a few years to figure this out, but rather then bring them close to the house for winter, I leave them at the top of my hill where the wind hits them. I get much, much less waste that way.

Breaking into a new bale sucks. The perfect tool to cut through the yucky frozen outer layer is an axe. Like a cast saw, an axe will slice through frozen hay, but not the unfrozen hay underneath. It took me forever to figure out that little trick and tool to use. Ours is always hanging up inside the barn so we know just where it is.

It is easier to unroll the hay in a mat along the barn floor then it is to stand it up and try and unroll it. In that way you can scoop up parts of the "mat" and put it into the mangers. If you try and unspool it standing up, it hangs up on the ends, often where it is frozen.

Let your ducks and chickens "graze" where you unspool the hay bale. Often there is lots of seed they go crazy for.

Don't let any of your hay go to waste. We use waste hay as bedding material. We do give fresh hay to our bunny who not only eats certain types of grasses, but burrows in it. Its a pet bunny only, but a very happy pet bunny (it lives inside our house and not in a hutch). We also use it to bed our chicken/duck coop, our lambing pens, and our calf's pen.

If you get hay with plastic twine, don't try cutting it off when wrapped around things. A small propane torch for soldering joints quickly melts the mess off. Trust me on this, I have a bulldozer and it is forever getting tangled in my bulldozer's tracks.

Don't get over-technical with composting. I merely push my waste hay and manure into a pile and in a week it is so hot it is melting off the snow. Waste hay and sheep manure make an incredible compost.

Have a waterline that is freezing, spread waste hay, and or waste hay/manure over it. We have a place that always freezes, yet ever since putting a few bucket fulls (2-3 wheel barrows) of manure over the trouble spot, even in -10 below (f) weather it has never froze. The heat really keeps things from freezing. I think the temp can get much lower than that, it just has never done so since doing this manure/waste hay trick.

In any case, probably 99% of this everyone knows, but for those that might not, I hope it makes sheep farming a touch easier. 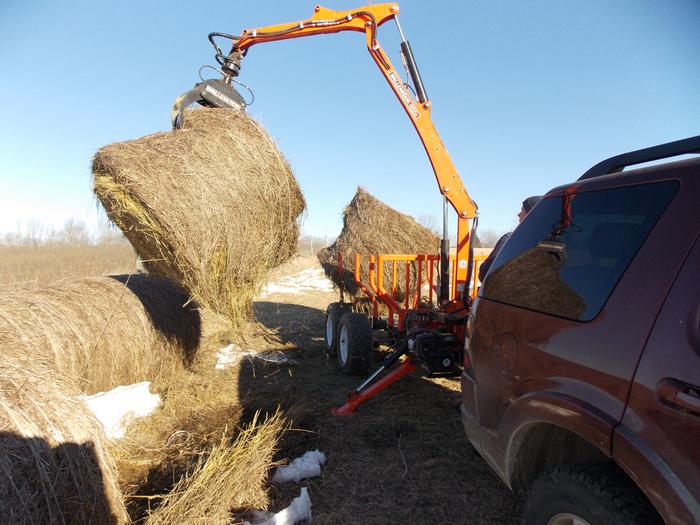 posted 4 years ago
I think that if you have a loader on the front of your tractor you can't go past a silage grab it'll shift virtually anything from hay and silage to logs, bundles of posts and dead animals.
You can use it to tear apart round bales too and place them quite accurately. I thought I had a picture but if you're careful and your tractor is large enough you can move four bales of straw at once with one two bales of hay is standard.
On one farm I worked we had one of these with a petrol motor and hydraulic pump on the front so we could tow it with the ute. 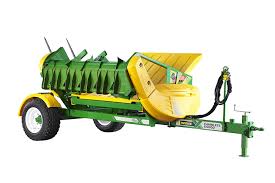