Ci Shepard
Posts: 16
Location: Vancouver Island, BC
posted 5 years ago
Recently bought a Little Chief Smoker that takes hardwood chips and smokes at low temps (165F, I believe) This is the residue after smoking some meat.
It is not ash, but small slivers of charcoal-ish stuff. Is this biochar? Would it benefit my young almond and olive trees to just sprinkle it around the drip lines?
Should I pee on it first? : )
image.jpg 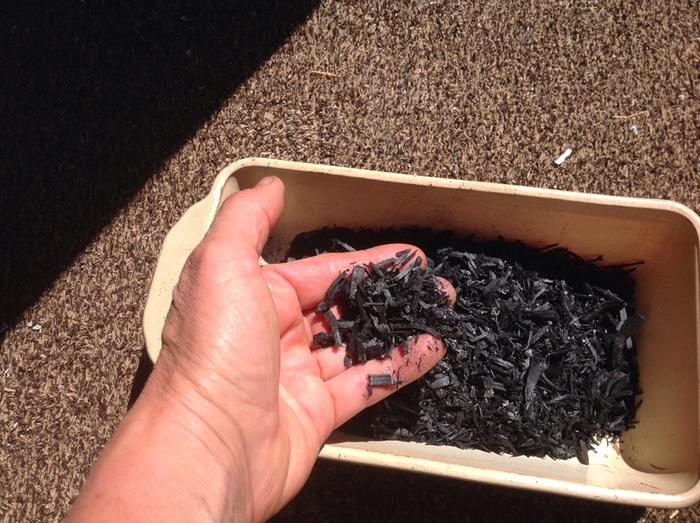 John Elliott
pollinator
Posts: 2392
88
posted 5 years ago
What's black on the surface could definitely be considered "biochar" -- it's biological material that has been charred. But 165F is not really high enough temperature to pyrolize all of the organic molecules down to their carbon skeletons. To do that, you need to be talking 400, 500, even 700F.

I think that if you were to cross-section those black chips, you would find that only the surface has been blackened, and that there is still recognizable hardwood underneath. Depending on how long it was at 165F, it might still have wood flavor molecules left and you could get another smoking out of it. At 165F, you can drive out the water that is contained in carbo-hydrates, so the cellulose part of the wood is what has been converted to biochar. However, lignin requires higher temperatures to break down, so that component of the hardwood probably remains, for the most part.

Would it benefit your trees? It couldn't hurt, but I wouldn't expect much help. For biochar to act as a reservoir of nutrients to the soil, it has to be pyrolized at those higher temperatures that convert the lignin.
Ci Shepard
Posts: 16
Location: Vancouver Island, BC
posted 5 years ago
I looked closely and broke open a few of the larger pieces and they are black all the way through. The wood chips were pretty small, more like shredded wood.
So, no matter what the size of the starting material it needs the same high temps? I thought I read that you could make biochar out of things like leaves and straw etc. Surely these things would be reduced to ash long before the fire got that hot ... ?
image.jpg 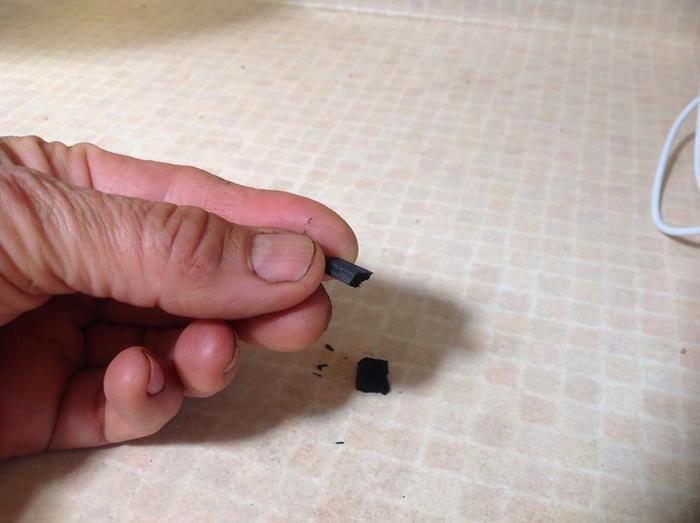 Dale Hodgins
Posts: 9002
Location: Victoria British Columbia-Canada
670
posted 5 years ago
I'm pretty sure that the temperature stated is for the area where the smoked meat goes. The chips would have to be hotter for any sort of charring to happen.
Ci Shepard
Posts: 16
Location: Vancouver Island, BC
posted 5 years ago

Dale Hodgins wrote:I'm pretty sure that the temperature stated is for the area where the smoked meat goes. The chips would have to be hotter for any sort of charring to happen.

True, the pan sits right on top of an electric element. But I doubt its 400F ... two large handfulls of chips finish charring and smoking in 30 minutes.
John Elliott
pollinator
Posts: 2392
88
posted 5 years ago

Dale Hodgins wrote:I'm pretty sure that the temperature stated is for the area where the smoked meat goes. The chips would have to be hotter for any sort of charring to happen.

Yes, at 165F you can drive off water, but it's really not hot enough for char reactions to proceed.


the pan sits right on top of an electric element. But I doubt its 400F

A-ha, so if element is 400F, it's much too cool to glow, but it could conduct enough heat up through the pan so that the wood chips were in the 300-400F range. This is enough to char them, but not enough for the cellulose in any paper thin wood chips to auto-ignite. These temperatures are also enough to convert the lignin to char as well. And it is temperature that is the important variable, not particle size. The only thing that particle size buys you is time; if you had big chunks of wood, you could run it for hours instead of being done in 30 minutes.

As for it being soil amendment, at first it is going to absorb soil nutrients, so peeing on it first is definitely advisable. I leave my biochar in an open barrel and let the rain fall on it and the bugs crawl through it. It also gets the dregs of the compost tea bucket thrown into it. That is pretty effective at inoculating it and loading up the nutrient storage sites in the char.

Ci Shepard
Posts: 16
Location: Vancouver Island, BC
posted 5 years ago
Thanks for all the opinions, folks. The material is completely charred, so I will save it in a bucket to innoculate. I will consider this biochar and an added benefit to the smoker (which, >omg, where has it been all my life<, makes turkey wings and beef ribs from heaven!!!).
Scott Strough
Posts: 299
Location: Oklahoma
21
posted 5 years ago
I experimented with "activating" some home made biochar. Used coffee, molasses, compost tea and inoculated it with MycoGrow. Worked out pretty good actually. Try it maybe.

Matt Banchero
Posts: 27
posted 4 years ago
Rub a chunk of char between your fingers if it has been "cooked" long enough you should be able to wash your hands clean with just water. If there is a streak of black grease on your palm the char isn't ready for the soil.

Also to correct some of the numbers getting thrown around here...at 165 degrees you are starting to drive off water, you can't say all of the water is driven off until the internal temperature of the wood is at or above 212 degrees f.

Wood will combust at 435 degrees unless you control the amount of oxygen to prevent the off gasses from flashing.

Best is determined by fully driven off volatiles, cation exchange capacity and surface area of the internal pore structure.
Jenny Smith
Posts: 9
1
posted 4 years ago
From my understanding bio-char is charcoal same thing if it is black all the way through then you have charcoal. if your wood is being held in a mostly sealed iron box or can above the electric heating element in your smoker that i assume glows red like the heating element on a stove you will cook off all the volatile compounds in the wood and and up with charcoal. ( glowing incandescent red at a medium red orange means 1500- 1800 degrees f the smoke box in your smoker only needs to be 500-700 to cook off most of the volatile compounds in wood to make it into charcoal and give the food that yummy taste we all enjoy.
the thermometer in you smoker should be up top telling you the actual temp of the cooking area in a good smoker this should be around 150-200 f or you are broiling your food.

put your charcoal in the garden and watch it keep water, oxygen & microbes for you in the soil where you Want it and feel free that there is no more magic to bio char than that.