Dale Hodgins
Posts: 9002
Location: Victoria British Columbia-Canada
670
posted 6 years ago
I've been looking all over computer land in search of the simplest, cheapest and best hot water batch system for those who can't have or don't want a pressurized system. Most systems are more complicated than what I want.

Bread box systems based on old water heater tanks are common. These sit rather high on the roof and they are prone to damage if allowed to freeze. Commercially available flat plate collectors usually have heat exchangers and a freeze proof fluid. I only want water. I'll use the system during the seasons when it will work, and drain it for 3 months when it won't.

Have a look at the professional looking drawing. I've mislabeled some things. The reflective panels are insulated and not glass. The tank would be roughly the size and shape of a mattress. It sits on a bed of gravel on a nearly flat roof. Foam insulation or biochar insulates the bottom and the northern edge. A 2x12 frame supports hinged reflectors and holds biochar in place. Gravel is heaped around the outside. Nothing is nailed or screwed to the roof. There's plenty of gravity at my place. A glass or plastic sheet covers the tank. The reflectors can be closed at night and they will close seasonally, to protect the unused heater from winter conditions.

The tank could be made from metal, plastic or rubber pond liner. A flexible bladder would be very resistant to freeze damage and it's the least expensive. I could see putting the whole system together for $250. I scrounge things.

Water in and Water out.
This system is meant to be filled each morning and the water used in the afternoon and evening. I envision between 100 and 200 gallon capacity. Yes, water is heavy bla bla bla... build in strength as needed. During the hottest days of summer, its easy to get more that this much water up to temperature. In spring and fall, less water would be added. When water is needed inside the home, the tap is opened. Solar systems can get dangerously hot, so an automotive type thermostat would prevent flow beyond a given temperature. The thermostat could be bypassed for the kitchen sink. Cold water would have to be added if it is found that the critical temperature has been reached, otherwise no water would go to the bathroom. A screened vent at the top of the tank, would allow water to run onto the roof if the tank is overfilled. A toilet type float could be used. The feed hose needs a little bleed valve, so that it can be drained down on any night where freezing is likely. This is to prevent the inconvenience of a frozen feed hose. There ore plenty of hoses that aren't damaged by freezing.

If someone is home during the day and hot water will be needed early in the day, then the system could be partially filled so that it heats up faster. More water would be added after use. A separate interior storage tank could be used. During cool parts of the year, the tank could be drained into something mounted as high as possible in the upstairs.

During cool weather, the tank should be filled in the morning and drained down at night, in order to prevent the water from starting the day near freezing. In warmer months, the tank should be filled at night. Well water comes out of the ground at about 50F around here. It would get a chance to heat a little, even at night in the summer and the collector could start doing it's thing quite early in the day.

Insulation --- If biochar can be used without fire hazard, then I'd like to be the first to use it for this. Most of the depth of the 2x12 or 2x14 frame will be filled with the tank. A couple inches of air space is desirable beneath the glass covering. Patio door glass might be suitable for the likely temperatures. That would be tested if a cold rain were to fall on an otherwise hot day. I might have to buy some of that super duper plastic.

Reflectors --- The protective doors which swing to the east and west, should double as reflectors, to concentrate more light on the collector. Another large reflector to the north would be important during the hours of greatest gain, between 9am and 3pm. Reflectors are the only portion of the system that would be vulnerable to wind. My roof will be used as a test lab for several things, so a lattice type fence with beans or something else growing on it could surround the collector at a distance sufficient to prevent shading.

Overheating --- The only real danger that I could see with a well built system is that if the system were left exposed to the sun during the summer with no water in it, the thing could get hot enough to melt the rubber or start a fire. I'll check the flash point of biochar and of foam insulation. Those heat activated vents that are used in greenhouses might work, if any are available for high temperature applications.

Legionaire's Disease --- In order to avoid an explosion in the population of legionella bacteria, the system needs to be completely drained regularly and regularly brought above 140F.

I'm not done but sending now so it's not lost to cell phone glitch. I'll finish soon. I'll do a better drawing. Did this one on a coffee shop counter.
IMAG4621.jpg 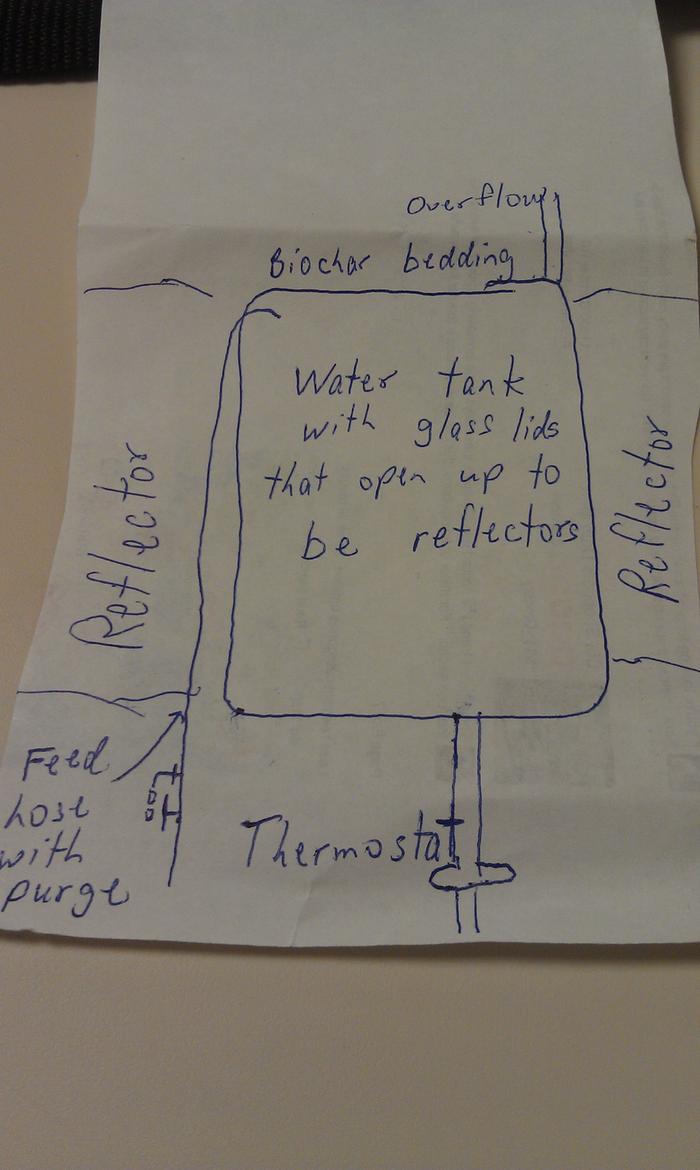 Dale Hodgins
Posts: 9002
Location: Victoria British Columbia-Canada
670
posted 6 years ago
I posted just before Christmas, then went away and it timed out for final editing. I'll make a good diagram soon. The flash point of charcoal is 660F. It's possible that a well built, empty collector could get that hot on a summer day. Biochar mixed with clay or fiberglass could be used instead. The rubber bladder would fail at less than 400F. Some sort of fail safe needs to be included. With water in the unit, the maximum temperature would be in the low 200s since water would boil through the overflow.