posted 2 months ago
I wanted to make this thread to help me keep track of and document growing blackberries naturally, with very little work and hopefully huge harvests!

Hopefully it can be helpful to others also!

posted 2 months ago
These blackberries were planted earlier this year in the Spring, and were only between 2 and 12 inches tall.

They are growing really fast, and some are already over 4 feet (1.3 meters) tall!

I love the way blackberry leaves look. The green on the new growth just pops and stands out and turns to a nice dark green color on the older leaves. 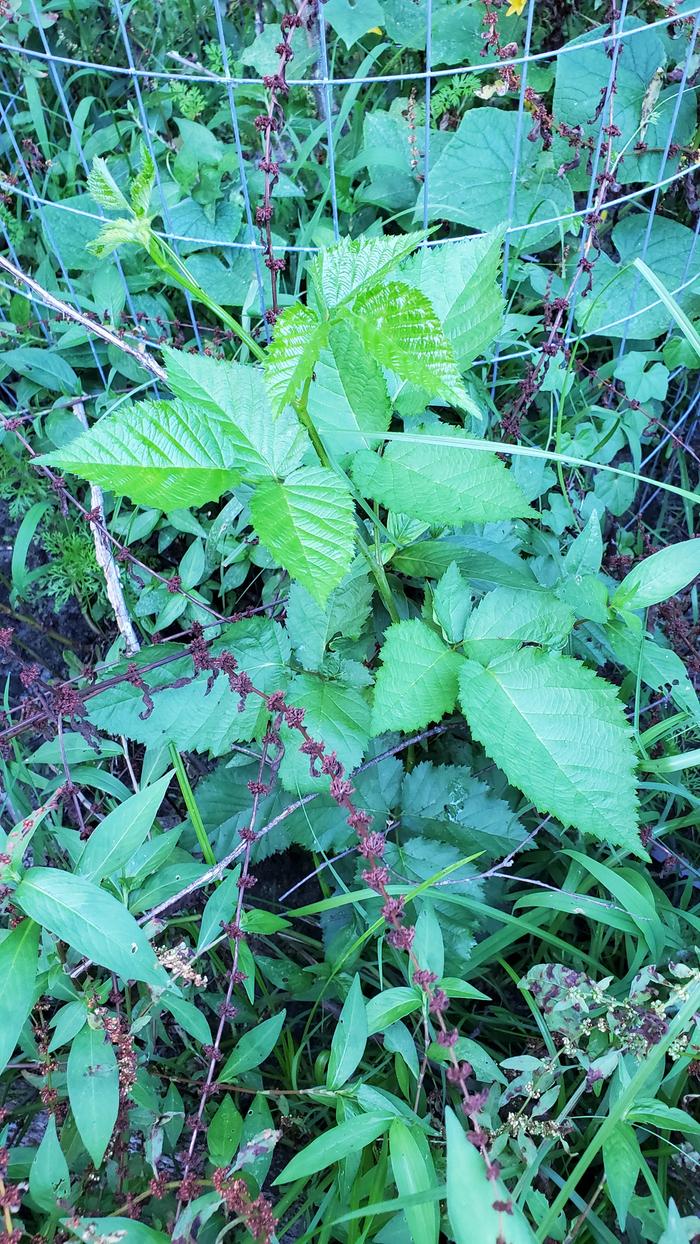 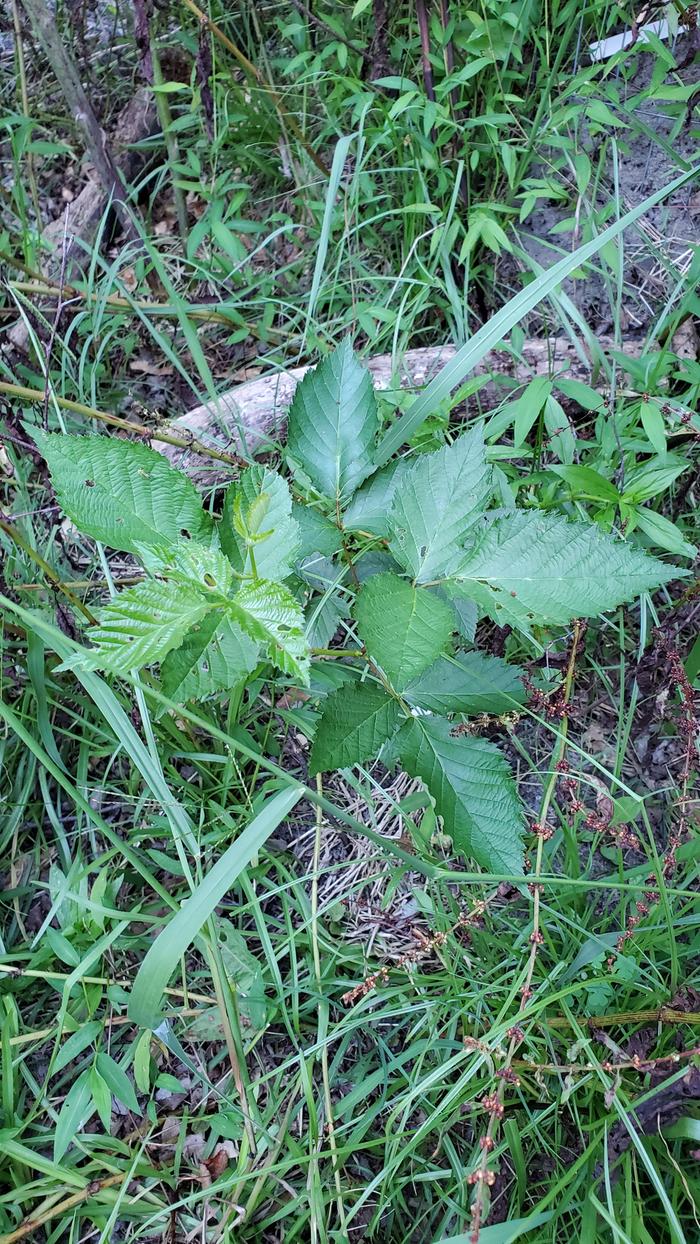 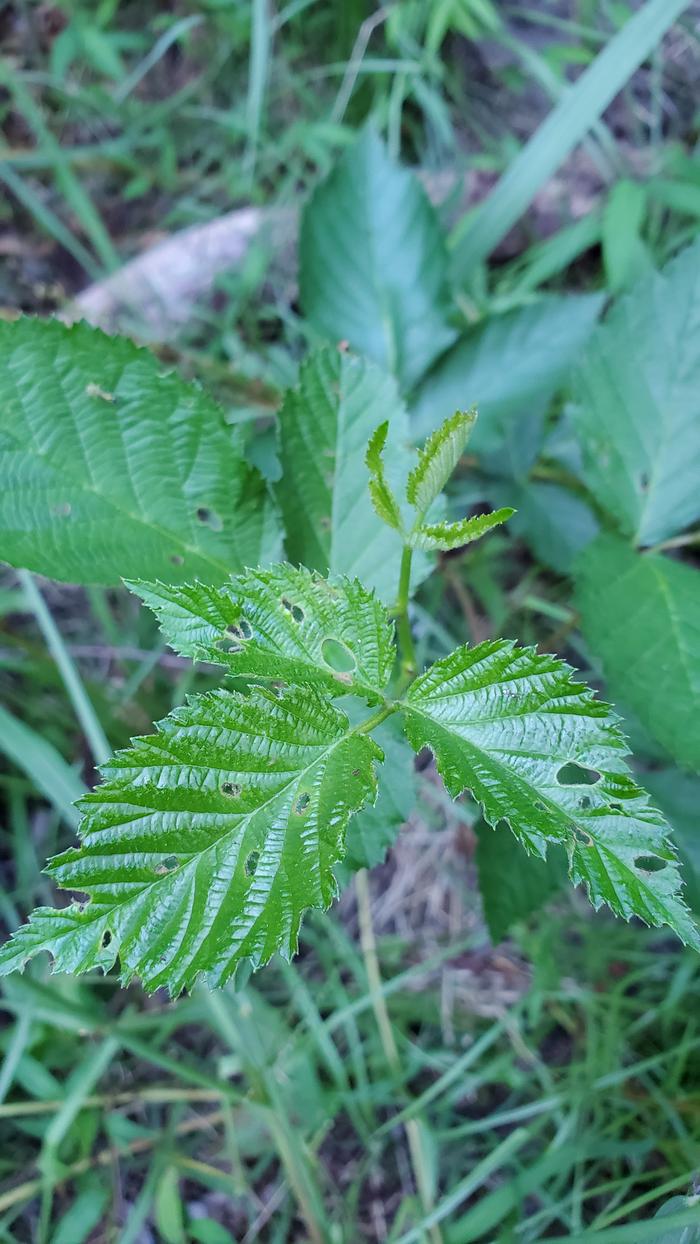 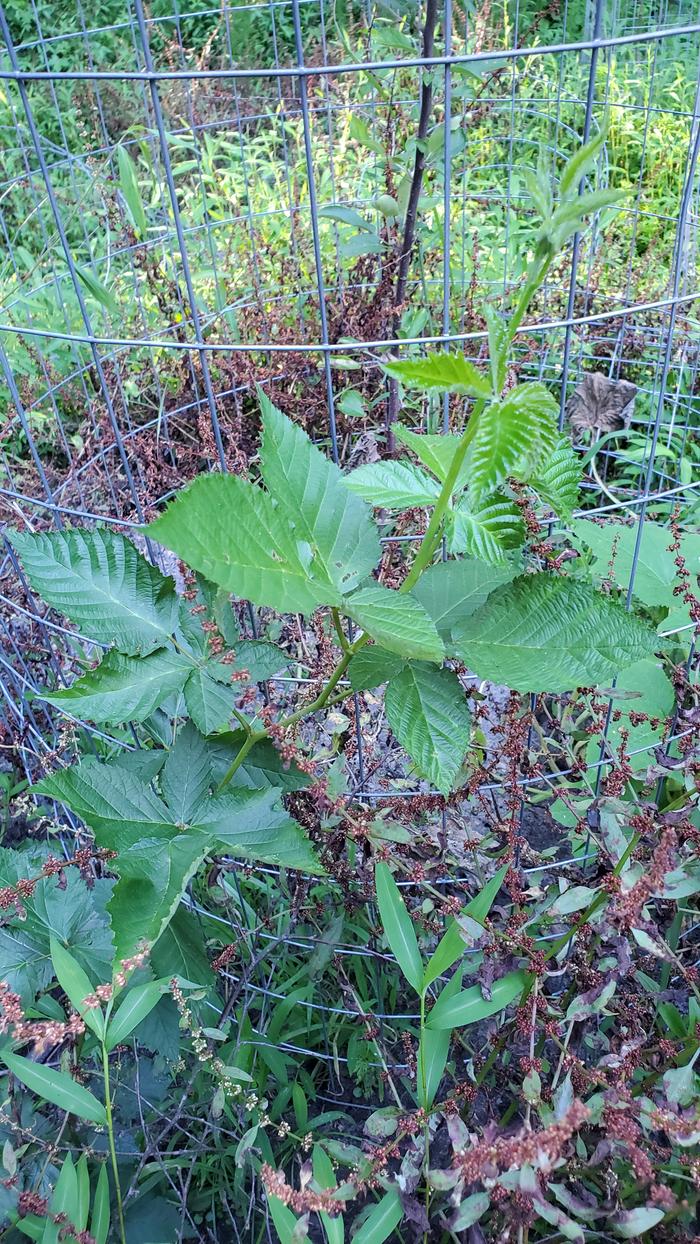 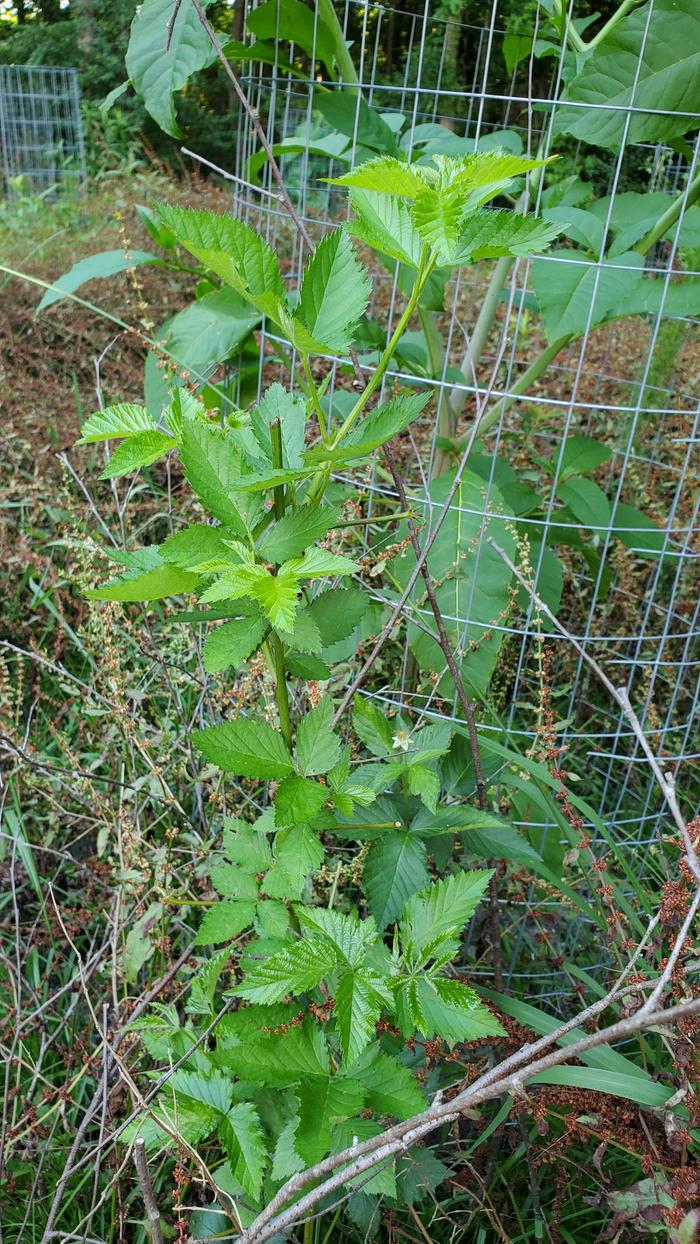 posted 2 months ago
This blackberry forming will probably be my first and only blackberry for this year with the plants being just newly planted. Hopefully the birds will leave it for me to taste!

Looking forward to hopefully getting a good crop of blackberries next year! 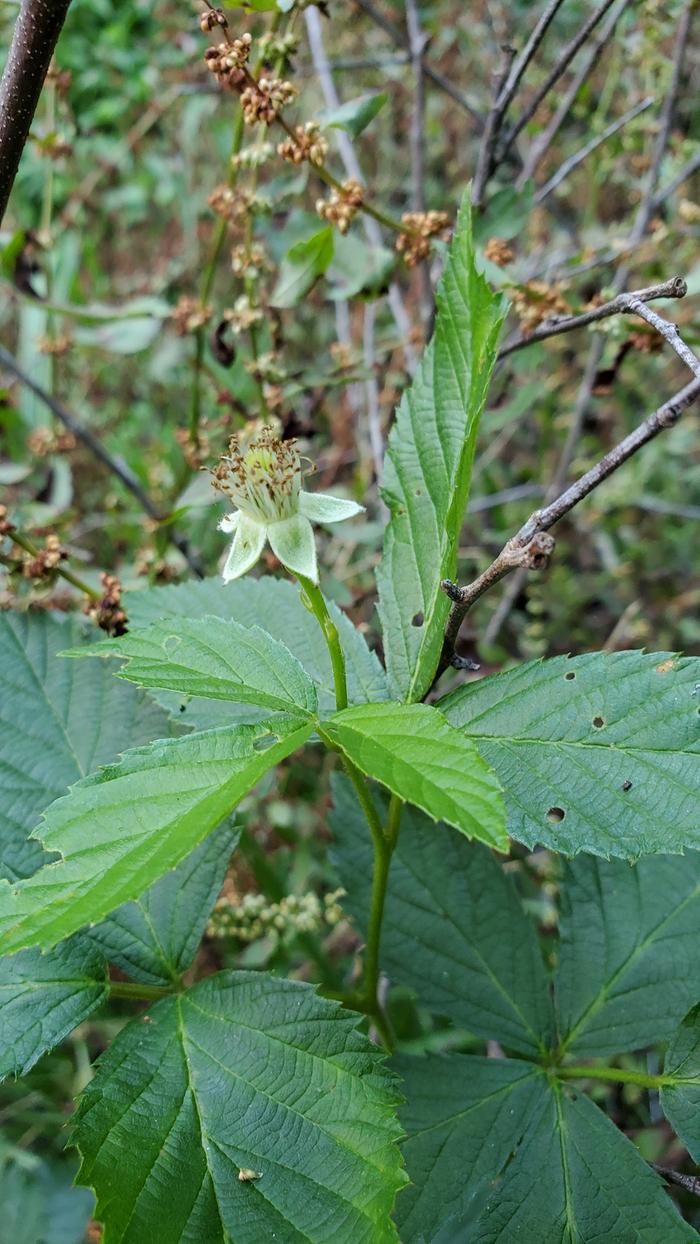 posted 2 months ago
This little frog thought this blackberry leaf was a good spot to relax. 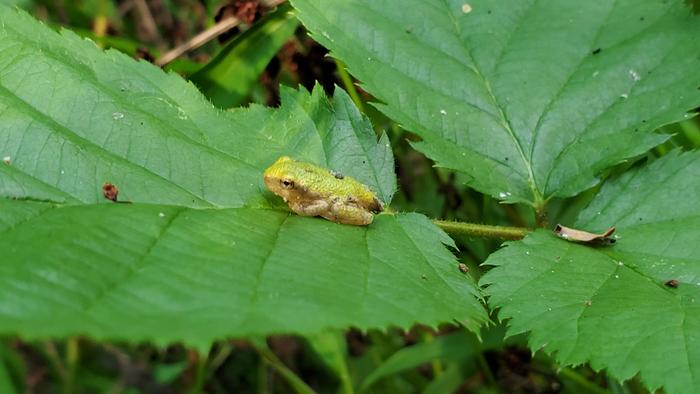 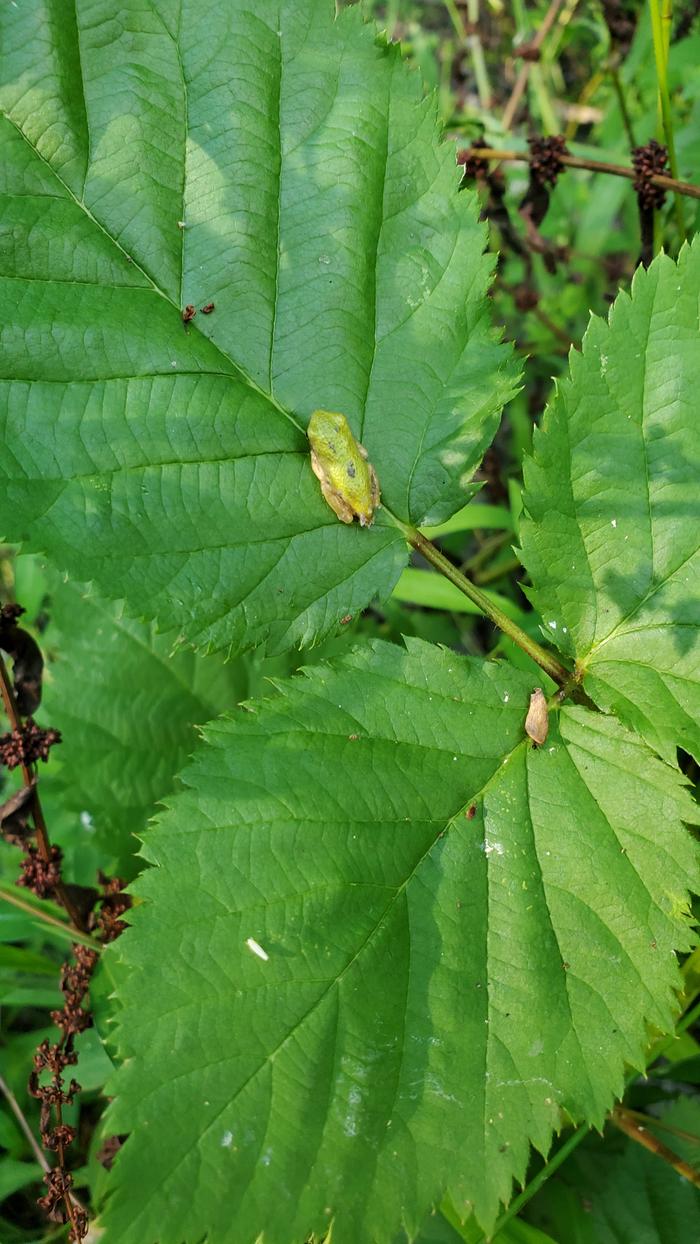 s. lowe
pollinator
Posts: 733
147
posted 2 months ago
Growing black berries naturally? You mean just abandoning the fight and giving  up a fence line to them? ;)

Out here they are one of the most pernicious garden weeds. I was pretty glad to be able to grab 2 big handfulls of quarter sized berries hanging over the fence in my backyard today
Steve Thorn
master gardener

posted 2 months ago
Yeah the thorny ones here grow like crazy too.

These are thornless so they are a lot more friendly, unlike their thorny cousins that seem to draw blood if I get too close to them.

Cristo Balete
Posts: 826
Location: In the woods, West Coast USA
112
posted 2 months ago
The odds are good that little frog has found the bugs that are eating your berries, and that's what he's doing there....win/win  :-)

I guess by "growing naturally" you mean let them mound up?  Don't cut the dead canes out?

I just spent 3 days with a walk-behind tractor mowing berry mounds, it's a dirty, messy and risky job with unseen branches having fallen in, berries growing over them, the mower hitting solid, unseen big wood.  These are native berries, in a remote location that I wasn't really paying attention to, but they got crazily out of control.  They were in about a 100 ft/30 meter circle, made things impassible, killed everything around them, and used up ground water that would have been better used downhill from them.

What happens when the plants aren't tended, when the canes that just provided berries aren't cut away, the new growth doesn't have as much support from the root system and the berries become small, mostly seeds and skin.  Berry plants produce their biggest berries from 1-year growth on new canes, although the 2-year canes can often still be living, will have blossoms, will sap the energy/nutrients/water from the 1-year canes, only to produce impossibly small, seedy things that almost can't be considered berries.   Of course, the plant does better when dropping seeds all over the place, but we don't want more seeds!

After a few years new plants need to be started because even the new growth won't produce big berries.   The original berry plants are only good for a few years.  The tips need to be put into the soil to create new plants.  Wild berries do this on their own, but need huge amounts of space, and ground water, and the old canes are taking up room, producing nothing, sucking up nutrients and water.

Mounds also promote diseases like rust and powdery mildew, because the old canes get covered with it oftentimes, and there's not as much airflow as there would be if they were tied to wires and trained.

There's nothing worse than waiting a whole year for big, juicy berries, only to get dozens of tiny, seedy things.  Wading through mounds of berries to try to pick some that can be seen hiding in the dense growth is time taken away from all the other food you may be growing.

Cristo Balete
Posts: 826
Location: In the woods, West Coast USA
112
posted 2 months ago
Oh, and rodents can hide under mounds and eat all your berries before you can get them!!

posted 2 months ago
I've been impressed with how my blueberries are doing growing naturally, with no pruning, no watering, and leaving most other plants growing around them, and letting new blueberry shoots grow up, and letting the bushes naturally expand. I haven't had any damaging disease issues or other problems.

I'm expecting hopefully the same results with the blackberries, and that if the older canes die, they can be left and serve as a natural trellis for the younger shoots.

I think a big part of not having disease isssues, is to grow varieties that are well adapted to the local area, and are tough and vigorous growers. Some that I've grown before were weak and sucseptible to lots of diseases, but others have been super tough, fast growers, and almost completely disease free!

posted 1 month ago
This blackberry got munched by the deer, but it is growing back strong and the small blackberry is still developing.
20200715_194119.jpg 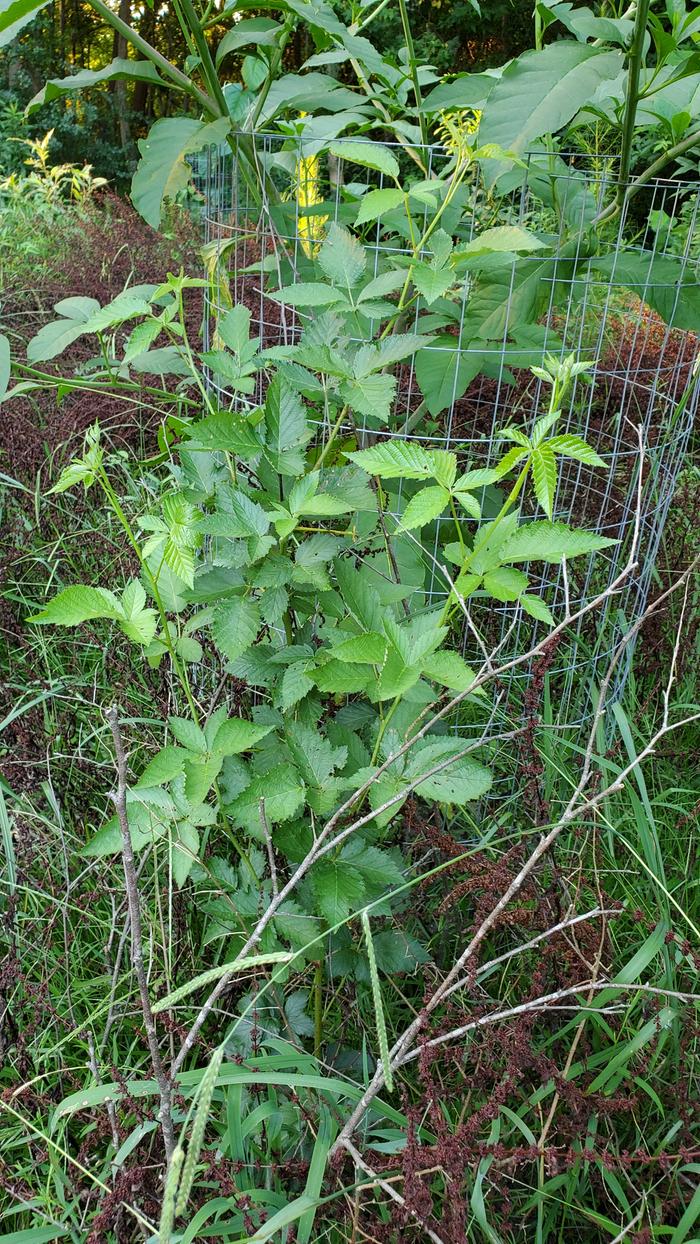 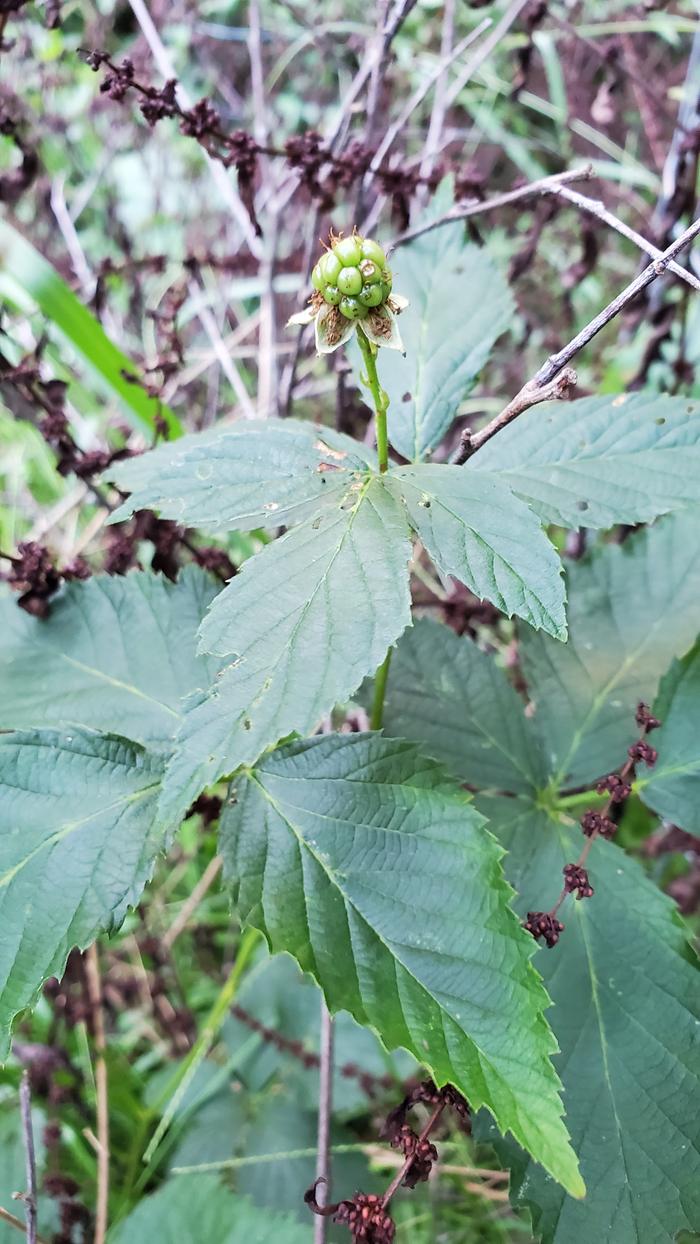 Randolph Nelson
Posts: 2
Location: NW PA USA
posted 1 month ago
Sounds like a lot of work.  Up here in the Great White North, the snow knocks the canes down in the winter, new ones come up in the spring, & we pick from now until nearly September.  Still have to fight through the thorns, but it's still better than multiflora rose....  I just picked almost a quart of nice, plump wild berries this morning in about 10 - 15 minutes in 2 little patches around the house, & there's lots more where they came from.  They're not giant berries like the commercial cultivars, but they eat just as good.  I'll have to put my pickin' clothes on today & go down into the old pasture before the birds get them.  We missed most of the red & black raspberries this year, but the blackberries & blueberries are making up for it....