Scythe Restoration for functional use

I'm new to the forums, and came here after doing some online research and talking with Ben from Baryonyx Knife company about a scythe I'm looking to restore and use.
Here are some pictures of my probable primary scythe setup for the time being. It appears to be a Craftsman model 8701. 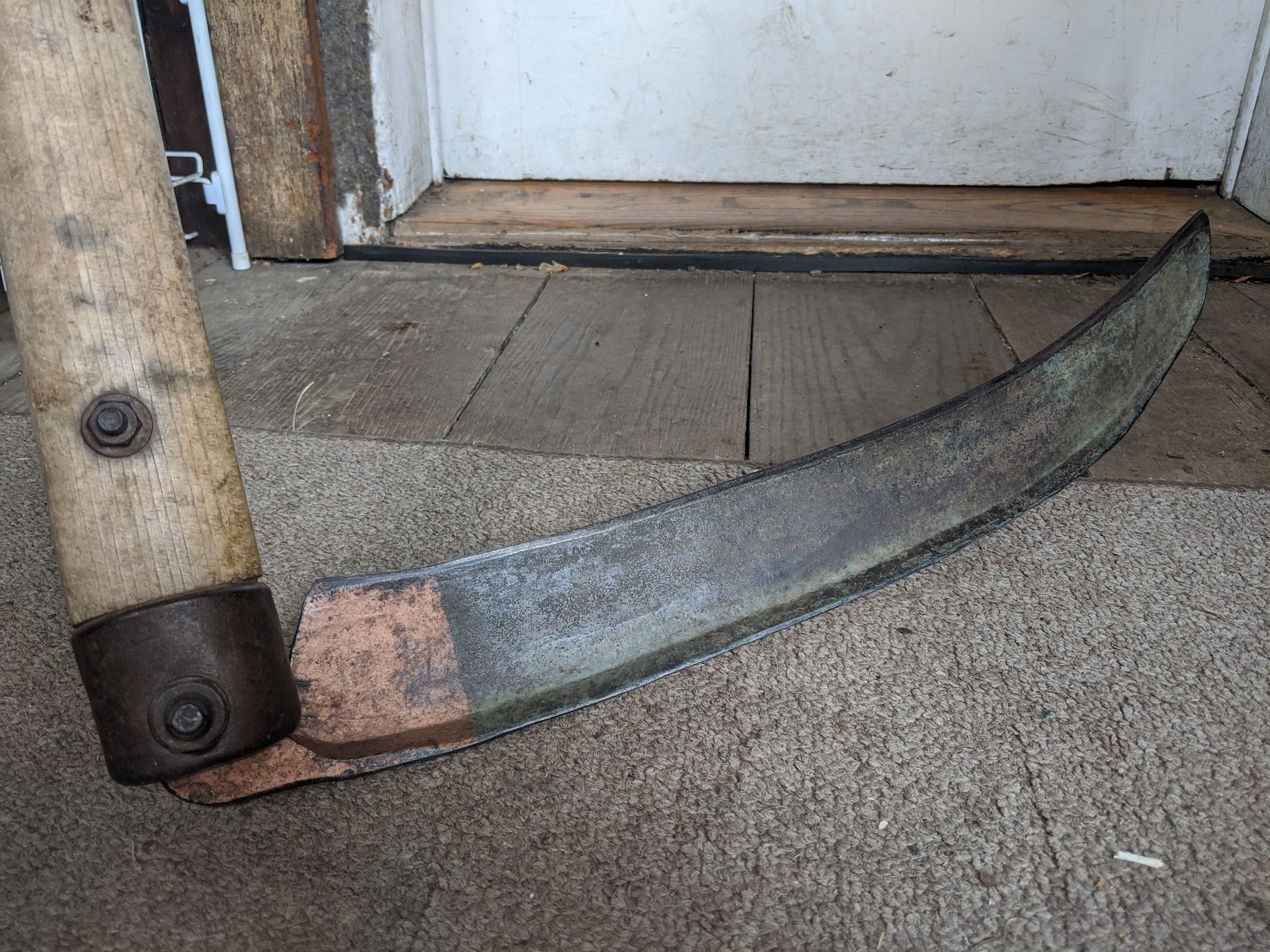 In all of my enthusiasm to swap from strimmers to scythes, I read up, adjusted the nibs, and started attacking some invasive weeds and golden rod with it. While I can definitely clear them, and technique is something I'm still developing, my blades could be sharper. This is the point where I called Ben on the phone. He was super kind, enthusiastic, and encouraging, not to mention a font of knowledge on the subject matter.
I have the luxury of an old wet grinding wheel, operated by a foot treadle, which I can use to follow the bevel and re-establish the edge. I filled the trough, gave the wheel a spin or two, and let the stone soak before getting to work. However, I started second-guessing my blade's origin, and my own ability not to mangle it. A buddy had a couple of old scythe blades turned sling blades that they wanted sharpened, so one of those became my first test/practice subject. This is one of them, after I hit it with a wire brush and sanding sponge. It was severely rusted, and remains quite pitted, but there's also a bunch of green paint on it, too. 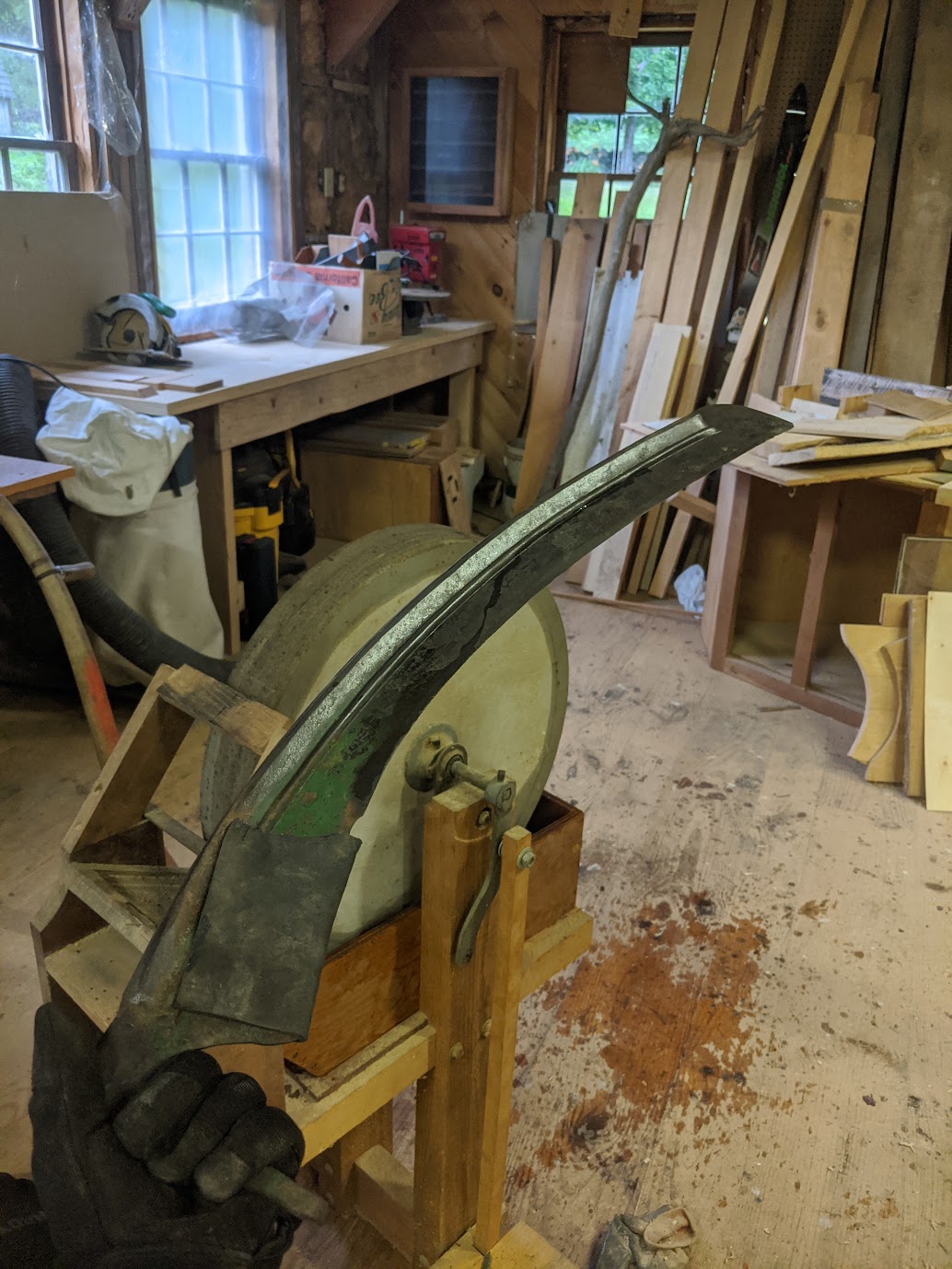 After a few passes following the old bevel, I think that the old bevel may be too wide an angle. Also, I could have a steadier hand (especially as I get closer to the toe), and may try to make a jig similar to the one in Ben's sharpening tutorial, utilizing some rods and bushing stock. I'm not done, as I need to make these corrections. Also, I did take more off of the back of the blade, though the second of the following two pictures doesn't show it. 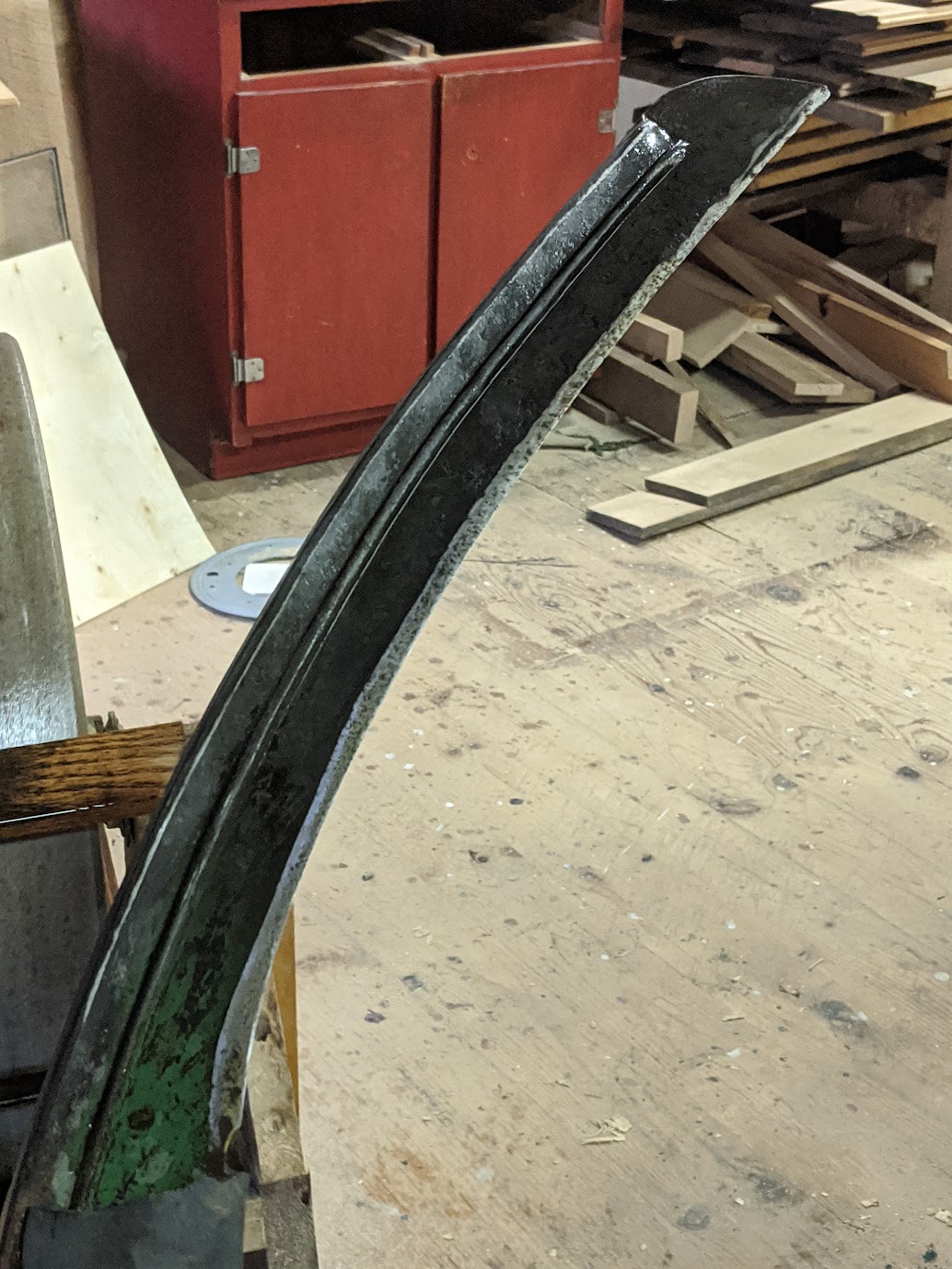 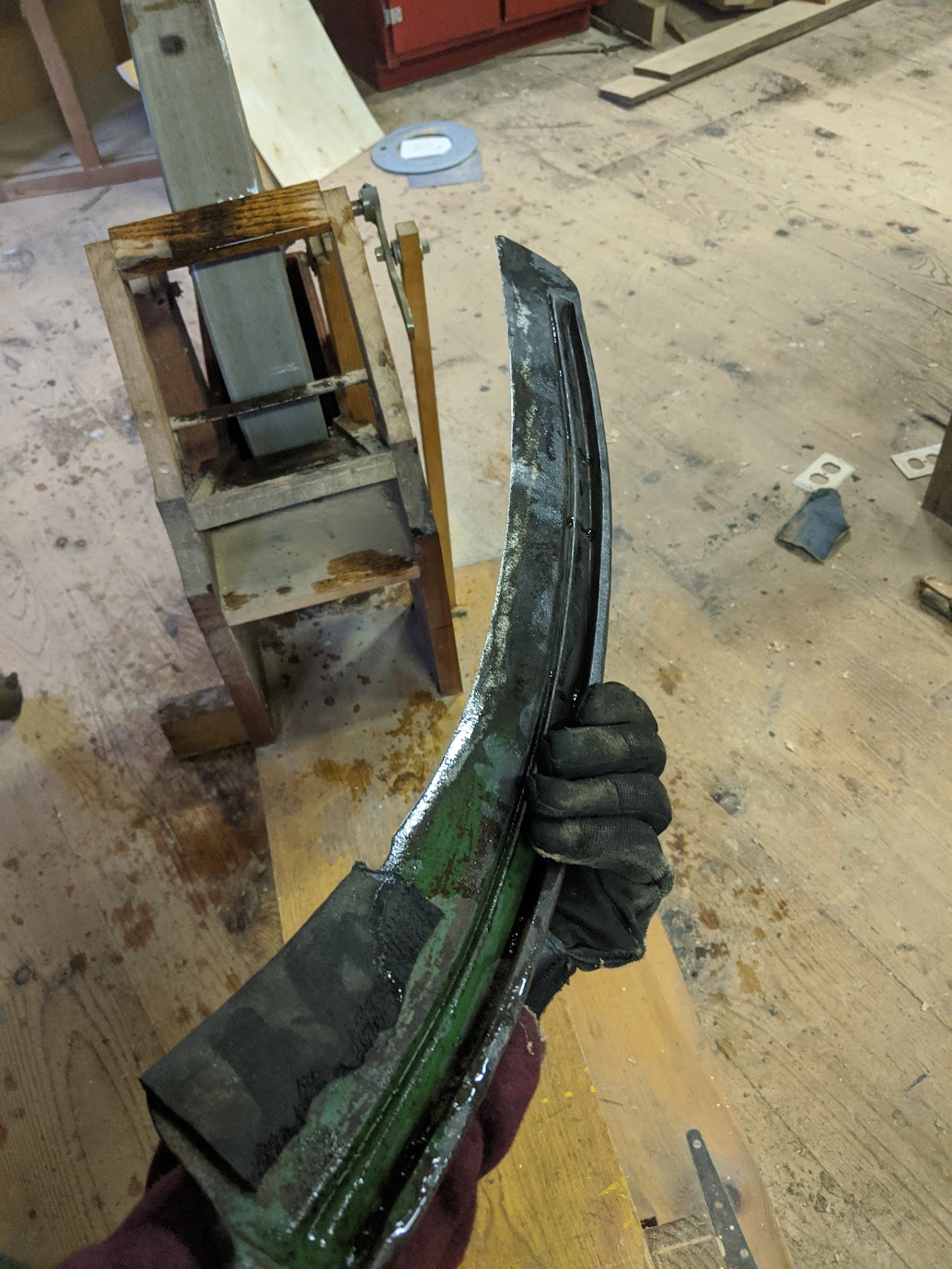 The goal for me is to learn on this blade, then tune up the other one that's currently mounted on the snath, as well as clean up that snath.
I've been looking around, but figured I'd hop on here to share the journey and ask for any advice/insight from you more experienced folks. Also, any ideas on the make/age of some of these blades and components? I doubt the Craftsman snath can be very old, but am curious about my ditch/weed blade and the sling blades. I'll take more pictures later, when the light is better.
Also, may be picking up another scythe tomorrow with a grass blade on it. It, too, will be a project to get that one in working order.
Looking forward to hearing from you all!

Benjamin Bouchard
Posts: 286
23
posted 3 months ago
The snath is a Seymour, either a No.1 or No.2 model. You can tell which it is by seeing if there are 3 holes in the heel plate or 4--if it has 4 holes arranged in a ᠅ shape it's a No.2 bush snath. The blade is a Swedish pattern one, and while I'm uncertain of the manufacturer who produced them for Craftsman, it was probably Igelfors Liefabrik as I've seen some Craftsman-marked blades that definitely used their tooling. Many of the Craftsman blades, including that one, have impression die forged tangs with a distinctive knob to them that's very unusual, it being forged in rather than being a simple upturn of the end of the tang. I would guess that both the snath and blade are probably of 1960's make, and almost certainly no earlier than the 1950's. The green blade has the appearance of a 1930's-1940's True Temper, though there are some other possible makers, and of course any tang markings would help clear that up.

For freehand grinding on a wheel I suggest having the wheel turn away from you and hold the blade at a roughly 45° oblique to the face of the wheel. The tension made by the friction against the wheel will help steady the blade in your hand, and the slanted approach both assists with clearance and minimizes the thickening effect of wobbling the edge on the wheel. Always view your angle as relative to the contact point rather than a fixed point in space that the wheel turns under.

"To live at all is miracle enough" ~Mervyn Peake
Baryonyx Knife Co. --Owner

David F Paul
Posts: 34
Location: Middle Tennesee zone 7b
3
posted 3 months ago
Very cool! thanks for sharing! I would guess based on what benjamin said, the austrian model blade should probably be peened

David F Paul wrote:Very cool! thanks for sharing! I would guess based on what benjamin said, the austrian model blade should probably be peened

As I noted in my post, that's not an Austrian pattern. It's Swedish. It should NOT be peened.

"To live at all is miracle enough" ~Mervyn Peake
Baryonyx Knife Co. --Owner