Holly Morton
Posts: 1
posted 1 year ago
My question is what should I do with a field that's been in corn, to boost fertility, mitigate glyphosate, and prepare for perennial pasture and food production? We close mid-may and the current farmer who rents the land is asking if we want him to till the field and plant soy. I have a lot of reading to do on larger scale farming but I don't have time (being home with three little kid and try to pack) before deciding what to do for this Spring, so really hoping some of you can help!

I'm new to working land on a larger scale. My husband and I grow a lot of food on an urban lot in Minneapolis but are purchasing a property right now that has a 27 acre corn field. We are very excited to heal this little spot on a river and lessen the chemicals flowing into our Minnesota waterways!

Long term, we imagine the 27 acres of corn will be divided between our food production, perennial pasture for animals, and native prairie. (There are already acres of forest aside from this 27 acres). We want to make this conversion the right way, with a mind to building soil fertility, not rushed. We have other means of income, so this is for self sufficiency, not to supply anything to customers, so we have some time.

In my current much smaller growing spaces, I wouldn't till, and I'd add a ton of manure and cover crop it. BUT - how does this translate to large scale? There is a ton of roughage from the corn harvest. Should we have him till it in so some seeds actually stand a chance? I have soil samples to mail in, so don't know for sure, but I'm sure it needs fertility help after years in conventional ag. Can I spread manure in the spring? Can I even get that much manure? What crop would you put in to boost soil fertility? Just any legume? or... Thanks for helping this overwhelmed newbie get off the ground fast! 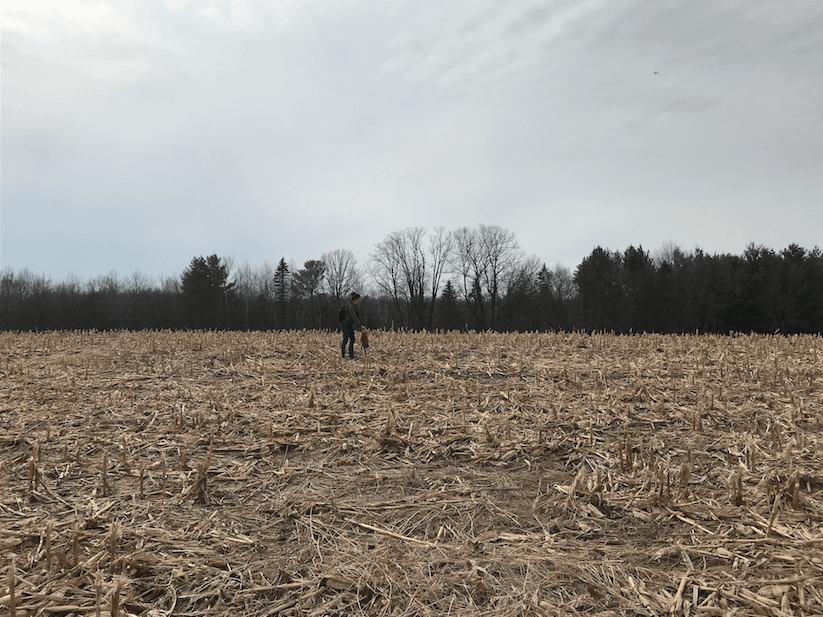 This sounds so great! i actually am a bit in the same situation only my piece of land is way smaller, only 1 acre. But since regenerative agriculture lies in my interests as well i am actually a bit jealous of your situation :D.
What i have found to be very interesting was digging in a bit deeper on the soil food web, an understanding on how your soil actually works made it (at least for me) easier to make the best decisions on how i would treat my litte piece of land. Tilling is actually a massacre beneath the ground surface, so i really wouldn't recommend that, as microbes and funghi support nutrient and water retention, soil structure, keeping pathogens at bay, enlarging root systems and many more. This would be destroyed just to make a sowing bed. I'd try to get the soil covered as soon as possible. the easiest way to do this is by doing nothing at all. Nature will start succession and the best thriving native plants will cover the ground asap. I don't know what your intentions were about your land yields the first years, but what i have done the first year is adding compost the places where i wanted to start growing some vegetableS and with the rest i barely interfered .
It is also very nice to get to know your land and after that, start designing, no matter what scale, you will always get a better idea of the status of your land if you let it be for a while.
A downside is a bunch of frowning neighbours though :D
However it can never harm to give your soil a push start, with adding compost or aerated compost tea, inocculating the soil with the bacteria and funghi that make the base of any healthy soil.
I can suggest the book regenerative agriculture by Mark Sheppard, it is a really comprehensible book about larger scale ecological farming methods, these ideas will surely apply to your land. Teaming with microbes by Wayne Lewis is also a comprehensible, yet pretty scientific  book about the life that makes up your soil and how to treat it right.

trying to become an ecological farmer in Belgium.

posted 1 year ago
Often what you'll find in these "conventionally" farmed fields is that there isn't enough soil life to decompose the corn stover that is left on the field after harvest.  So the first priority is to pump life into the soil, or rather, pump sugars and starches into the soil (root exudates) to feel the microbial life that's there.

No, I wouldn't till.  Certainly I wouldn't plow -- maybe disk or harrow, but don't turn the whole thing over with a plow.  That would only kill what little fungal life is out there.  The only way I would till (and this only shallowly) would be to first broadcast a warm-season cover crop mix (with at least 10 species -- grasses and broadleaf plants), and then go over it with a disk set to only go down 2 inches at most.  That would chop much of that corn stover up and lay it on the soil surface, and would lightly turn some of your cover crop seed into the soil.  Make sure there are some nitrogen fixing plants in your seed cocktail, as the soil will be hungry for N.  If you till any of the corn stover under the soil surface, you'll have N-rob, and that'll tie up available N that your growing plants need.

It's not too late to get grasses started, and then in 3 months or so, if you could borrow a herd for 1 day (and 1 day only) to lightly graze the tops off those grasses/plants, that will stimulate further plant growth as well as get a free dump of manure onto the soil.  You can graze it once every 60 to 90 days, giving a chance for the plants to recover between grazings.  With each pass of the cattle, you'll be adding soil organic matter, stimulating plant growth, and getting rid of weeds (while grasses become predominant).  By fall, you'll have grazed it at least 3 times as the plants go dormant.

Distributing cow patties across the field 3 or 4 times between now and Christmas will put a lot of bio-available N right where you need it.  It will also feed the worm population.  My guess is that if you were to go out there right now, you wouldn't find enough worms to fish at a pet store.  But hundreds of cow pies become hundreds of little worm nurseries.  If the goal is to seek biological solutions to fix the problems created by years of "conventional" till/spray/extract agriculture, you'll want to jump-start the worm population as soon as you can.

If you're not familiar with Gabe Brown (Bismark ND), Youtube him and watch his stuff.  He knows how to fix broken land and restore life and productivity to tired soils.

s. lowe
pollinator
Posts: 858
186
posted 1 year ago
First of all, congratulations, what an exciting adventure to embark on.

The first thing I would recommend is looking into the writings of Gary Summer. He farms in Wisconsin, writes books, and owns a company called Midwest BioAg. He has written extensively on converting from traditional to organic production and, I believe, usually recommends 3 years of targeted cover cropping. Obviously you have different end goals than him but in think you'd learn a lit from his clear and concise writing style and he's got good information about specific cover crops.

I'd imagine that after you get.your soil test you will find that some things are a little short or some ratios are a little off, this is easy to correct if you can spread the missing minerals over cover crop that you are.going to mow/crimp/turn in. Then after youve added deficient minerals and gotten diverse life back on the  land you can start moving things toward your.ultimate goals.

I'd also look into Mark Sheppard, he's done stuff with converting corn fields into perennial poly culture that you might find interesting