Jessica Padgham wrote:I have seen a few sprouts in my garden this spring from the hairy vetch that I planted winter 2014. It bloomed spring and summer 2015 and in some places I deliberately popped open dried seed pods and spread it around. So far the results are poor but it's still early.

Pennsylvania ( I used to live there) uses a lot of crown vetch as I recall and that one is a perennial.

Hmmm, maybe it's crown vetch that I'm seeing along the highways then. I'll take a closer look this summer, the flowers should tell me for sure.
show more
5 years ago
plants
Hairy vetch advice

Scott Stiller wrote:Thanks for your help Ben. Will it self seed and take over an area if left alone?

Here in zone 6 Pennsylvania, a lot of the embankments along highways are covered in hairy vetch every summer. I can't imagine the highway department is seeding all those miles every year, so it must be self seeding. In my own garden, I prepped the area with a mixed cover crop back in 2003/2004, including hairy vetch. It's planted as a small forest garden now, and every year I get some vetch plants showing up. Only once was it a nuisance where I felt the need to manage it (just tearing a lot of it out), because it was smothering other plants and climbing into fruit trees.
show more
5 years ago
plants

Roundup in my mulch!


The word you are looking for is chelation. Glyphosate is a very efficient chelator, with both a nitrogen and a phosphorous in the molecule. This super-chelator property is what makes it an effective herbicide, starving the plant it is sprayed on of necessary minerals.
====================
I believe this is a myth started by Don Huber. Wether he believes it or not, I don't know. He has made some outlandish claims that don't stand up to the lightest pass of scrutiny. I don't doubt that glyphosate is a good chelator in vitro, but it is implausible that it kills plants in the way you indicate.

Glyphosate kills plants because it blocks the synthesis of aromatic amino acids, specifically by blocking the activity of the EPSP synthase enzyme. Genetically engineered "Roundup Ready" crops are resistant to the effects of glyphosate because they express a different version of the EPSP synthase enzyme that is not affected by glyphosate. If glyphosate really killed plants by starving them of minerals, it would not be possible to make glyphosate resistant plants this way.
show more
7 years ago
mulch
Is there a cover crop that would grow under 2" of pine bark nugget mulch? Then how would I kill it?
I'd suggest something large seeded, so the seedling has enough reserve to push through 2" of mulch. I think some kind of large legume (large seed that is), like peas or beans would be able to handle that.

Not sure what the best way to kill it would be though. Maybe just mowing after they flower.

Alex
show more
7 years ago
soil
Beautifying a food forest...
Aconite, snowdrops, and a variety of crocus all add beauty in early spring, when we are most starved for it, and provide an early food source for bees and other pollinators. The other thing I like about them is that they take up essentially no space in the garden, since the leaves die back as the other plants grow.
show more
7 years ago
forest garden
sources for fruit guild companions like goumi, maxmillian sunflowers, comfrey, jerusalem artichoke
Regarding persimmon, the cheapest sources will probably be bare root, and persimmon can take a few years to recover and establish after that. In many cases, a faster and cheaper method is to start your own rootstock from seed right where you want the tree. They will be ready for grafting after 1 or 2 seasons of growth, especially if you use D. virginiana, and will quickly surpass a bare rooted tree planted at the same time. Seeds are cheap, and so is scion wood. If you have not grafted before, practice this spring, and you will be ready when the rootstocks are ready! start 3 or 4 seeds in each location, maybe a foot apart, to improve your chances of good rootstock growth and a successful graft.
show more
7 years ago
forest garden

Cover crops on a hugelkultur?
I think the big strength of tillage radish as a cover crop is to break up hard soil, which is not likely to be the case on a newly prepared hugelbeet! There is some concern with nitrogen tie up in the early stages of the wood decomposition, so something nitrogen fixing is a good idea. Vetch and clover are both good candidates. I like vetch because it so reliably self seeds, but it can crawl up and over other plants if they are too small.
show more
8 years ago
hugelkultur 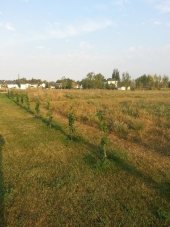 preparing for a food forest
if you're going to get rid of the current ground cover, start killing it now. It would be best if you can, as soon as possible, sheet mulch the area you want to plant in the spring.
show more
8 years ago
forest garden
Difference in flavor between asian and american persimmon?
I agree with John, and I'm a bit surprised that so many of the posters prefer Asian persimmon. I'm wondering if they have only had wild seedling fruit....those can be not so good. Some of the selected varieties are incredibly flavorful, I would swear they had some kind of spice added to them if I didn't know better! Of course, I may be missing out on some of the better Asian persimmons. I've only had those from the store, and a few home grown varieties that can make it in zone 6.
show more
8 years ago
trees
food forest do you plant natives or exotics?
I don't hesitate to plant non-native plants in my garden. Restricting yourself to natives is very limiting IMO. Of course, there are some great ones......I've got pawpaws and American persimmon, and I would recommend those to anyone. I also have Asian and European pear, hardy kiwi, Asian persimmon. With the exception of the kiwi, the bees love them. If I had more room, I'd plant jujube Among the herbaceous plants, I don't know where many of them come from. I know sweet cicely is native to Europe, but it is useful as a nectary plant, and my son found a black swallowtail caterpillar on one this spring. Russian comfrey is quite popular with the bumblebees. Lemon balm is from Europe, but supports a lot of the native insects as well.

It's interesting how many "native" enthusiasts are surprised to learn that their apple, pear and peach trees are not "native"!