2012 inland northwest permaculture conference will be in Missoula!
A group of people interested in helping with the conference got together again this weekend again to brainstorm and plan. At this point, we are definitely looking for local sponsors and people interested in presenting or holding workshops. We would also like to figure out a venue for lodging out-of-town folks, preferably at low cost and not too far from the university. (Those in attendance were a bit stumped on this point, so if others have any ideas about places, please chime in!) Some folks are also going to begin handing out flyers at the farmers market and other local outlets frequented by people likely to be interested. Here's the text of the notes that have begun to circulate, hot off the presses:

The 2nd Inland Northwest Permaculture Conference (INPC II) will be held in Missoula, Montana on November 9, 10, and 11 at the University of Montana's Conference Center. Missoula is the most progressive, large city in the Inland Northwest Bioregion and we expect a good turnout from Missoula and western Montana in general. We welcome the participation of University of Montana students, faculty and staff. A new Transition Town Missoula has recently formed and will collaborate with the conference. Combine that with the participants who will be coming from many other corners of the Inland Northwest (Idaho, eastern Washington and eastern Oregon) and we expect a rousingly good educational event. 275 people attended the 1st INPC in Spokane last November. We anticipate a larger Missoula conference with dozens of presenters and workshops, field trips, a Saturday evening contra dance, hands-on activities and hundreds of people exploring pathways to a positive future. Permaculture is a whole-systems design system that can be applied at any scale.

If you would like to be a presenter, sponsor, committee-member or a volunteer for the 2012 event please get in touch with Michael Pilarski. 549-486-4056. Michael@friendsofthetrees.net.

"The Beginning is Near"
Our 2012 theme is "The Beginning Is Near". The beginning of an ecologically conscious and socially equitable world informed by permaculture.

Seeking eco-friendly roommate
I recently became the official owner of a 3-bedroom trailer on a grassy lot in the heart of westside missoula, a very short walking distance from the Missoula Food Co-op (an extra nice perk as far as i'm concerned). At present, 2 of the bedrooms are occupied (with me in one bedroom, and a couple I'm renting to in the other). Would like to rent the 3rd bedroom to someone who also strives to live a permaculture-oriented lifestyle, without having to feel puritanical about it. I've already begun work on transforming some of the grass outside into a gardening area where I plan to experiment and play with growing perennials and herbs, and if other roommates want to garden as well, I'm sure we can find enough spots outside for everyone to have an area where they can do their thing. One aspiration I have for the summer is to build a rocket mass heater in the central dining room area, and possibly host a work party (or maybe even multiple parties) to solicit help in getting it designed and built, bribing guests with organically prepared food.

So anyway, if anyone is interested in renting a small but affordable bedroom in an old 1970's trailer that aspires to be transformed into an ecologically sustainable dwelling, the room is $260 / month + 1/3 share of utilities. Would like to find someone to move in by the beginning of April if possible.

show more
10 years ago
missoula
Permaculture Freeschool Thursdays
Last Thursday, the freeschool group that meets on the ground floor of the University Center nearly every Thursday evening launched into its permaculture-oriented phase, as we started discussing Chapter 1 of Sepp Holzer's Permaculture book. Our initial plan had been to go through around a chapter each week, but due to the density of the material and the length of the chapters, we decided that we'll need to spend at least another week (maybe more) before we'll be ready to say we're finished with Chapter 1, so...

Next Thursday, the plan is to have another fairly informal discussion group, loosely themed around some of the topics in chapter 1 of the Sepp Holzer book. Anyone with an interest is welcome to come, regardless of whether or not you've read any of the book. It does help if more people are familiar with the topic being talked about, but we don't want to turn anyone away if they haven't had a chance to study it, and due to the informal nature of the gatherings, we often wander into talking about other subjects that are only semi-related. That's the nature of this freeschool, and those who attend either like it, or those that don't stop showing up.

If anyone wants to come and participate, we'll be meeting next Thursday on the ground floor of the University Center, and would welcome any newcomers. Northern section of the building, between Just Chillin and the University bookstore, out in the middle area where there the tables and chairs are located. We begin at roughly 5:30pm. 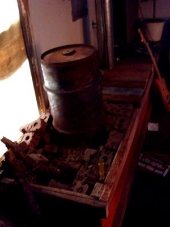 rocket mass heater gathering
What a great idea! I'll plan to come, and intend to bring a pot full of spicy bean dip to share for the occasion.

show more
10 years ago
missoula
transition town missoula?
There's a free school group that's been going through the Transition Handbook and discussing a couple chapters at a time in a fairly informal, free-form manner. It meets on the ground floor of the University Center every Thursday at 5:30pm. At the next session on January 19, we will be discussing Chapters 11-13.

After that, we'll be finished with the Transition Handbook, and so we might move on to studying another book, possibly something permaculture-related (but not necessarily), depending on what the group as a whole is most interested in. All are welcome to join in and participate.

show more
10 years ago
missoula
the heirloom winter market - missoula
What an awesome synchronicity! Some of the folks at the weekly free school I attend were just talking about the Heirloom Market last night, and I was thinking it's about time for me to finally check it out this week. Looking forward to it!
show more
10 years ago
missoula
Missoula Permies Community?
Tahj, I love to cook stews and stir frys (made from mostly organic or local ingredients when possible) and bring them to potlucks. If you're having one, I'd love to come to share food and conversation.

I suppose I could also mention that there's a group of local folks that get together to eat and share vegetarian food, potluck-style in front of the Missoula county courthouse every Sunday afternoon at 4pm. We call that one Food Not Bombs. All are welcome to join in. (It's been happening since long before the Occupy Missoula stuff started up, although since that began, there has been a fair degree of cross-pollination between Occupy and FNB.)

I'm also interested in learning to build a rocket mass heater, though I have virtually no experience with it except listening to some of Paul Wheaton's library lectures and videos. Hands-on learning while working with someone who has more knowledge and experience than I is something I seek.

show more
10 years ago
missoula
Who wants to find/form an intentional community house in town?
One point I want to further clarify: When I say "within bicycling distance of Missoula", I'm talking about being close to enough to commute in and out of town on a fairly regular basis.

So... while a place 50 miles away would certainly be within possible bicycling distance if you ride for most of the day, that's not what I'm looking for. Preferably, I'd be able to bike to downtown in under an hour. At the speed I bicycle, that would mean less than 10 miles from town. (Maybe 15 miles if we stretch it a bit, and everything else about a place that far away happened to be near-perfect.)

A place in the middle of town would be awesome for convenience, but maybe less advantageous in terms of what we'd be able to do with it in terms of keeping animals, building restrictions, and likely amount of space to garden. As far as I'm concerned, all opportunities that also fit criteria I already listed are worth considering.

show more
10 years ago
missoula
please use a real sounding name
I was contacted by one of the moderators regarding the "believable name" issue. I was not directly accused of having a name that's not believable, and it looks like I'm still able to post for now, so maybe final judgement has not been passed, but it was requested that if I change my name to a fake one, it must sound believable. I replied with the following:

I suppose whether my name is believable or not depends on who you ask, and what their cultural background has taught them. If you don't believe the name I've given is mine, I suppose you could call me by something else, but then how believable would it be to me to hear others calling me by a name unfamiliar to my own ears? (Or, to be more applicable here, if they addressed me in writing using a more "believable" name that my eyes might not recognize as my own?)

I have to wonder though, could the perplexity I'm feeling right now vaguely resemble in some minuscule way what the native tribal children felt like when they were taken from their communities, forced into schools run by the colonizers, and assigned "believable" names like "Steve" or "John"?

Of course, there really is no comparison, because this is just a website, and at least here, if the name I call mine is rejected, I have the option of leaving and going to talk with people in other venues. It would be a bit of a bummer though, cause I like this website, and there seem to be a lot of intelligent, friendly, and very knowledgeable people who contribute here, but maybe it would be for the best, as I'd rather connect with those who can respect the name I give when I introduce myself anyway.

show more
10 years ago
tinkering with this site
Who wants to find/form an intentional community house in town?
I want to put my feelers out there and see how many other people in Missoula (or those thinking about moving here) might be looking for the same thing I am: Generally, a place to live and practice an ecologically healthy, autonomous, egalitarian community lifestyle in or very near to town. (At least within biking distance of Missoula.)

More specifically, here are some "ideal" qualities in the place / group I'm looking for:


Looking at this list, I know it's a fairly tall order to find a place/group that would satisfy every one of these criteria, but it provides a target to shoot for, even if everything doesn't turn out exactly according to this vision. Not looking to move into anything immediately, and will probably stay where I'm at until at least the end of winter. Right now, I just want to solicit feedback and find connections with others who share similar dreams to manifest, and with luck, maybe a group can form and we can begin planning.

I might crosspost this to craigslist in the future, but for now, permies.com seems like the best place to begin looking.