Growing Tea- against the ANTI hugelkultur farmers in MS
Interesting that the state of Mississippi is experimenting with Camiellua Sinensus Sin.  The Charleston (South Carolina) Tea Company has been growing Tea for at least a decade if not longer.  I believe they are the only commercial tea "plantation" in the US.  I am experimenting 28th growing Tea here in the frozen tundra of central upstate NY.  Started with 10 cultivars.  Lost 4 the first winter.  I replaced them.  Lost 7 the second winter.  Replaced them and now have 10 with 1 plant that is almost 4 years old.  Hopefully I can get two or three to survive.  I just want to maintain a source of caffeine that is locally produced.  I am also experimenting with Ecuadorian Holly.  If that grows here I may give up on the cameillia.
show more
6 years ago
hugelkultur

Deb Rebel wrote:Again, Dave, thanks for the quick drop about the free ship. I ordered 50# of flake and a 5 gal of oil. I will see how long it lasts.

Our grocery store got in some whole coconuts, and I bought one, broke into it and used that to make a pot of milk. Interesting. I am probably going to blend with something else but it does add a lot to the variety I have in my diet. I'm still working on the nutrition-vs-calories. My hubby wants to eat healthier seeing my turnaround so I bought the mass quantity of product. It only hurts buying massive bulk when it comes time to replace it, overall it is cheaper. Looking forward to getting the stuff and trying it. I am getting gallons of oil at roughly $60 plus $10 ship and this oil looks to be much better.


Cool deal Deb.  I don't bother with calories but I also am very careful about consuming as few carbs as possible.  My diet is approximately 70% fats and especially animal fats, 25% proteins, and 5% or less carbs.  I do understand the problem with buying in bulk.  It certainly does put a pinch on my budget.  I just ordered a 50# bag of shredded coconut too.  Now I'm broke until my next SS check at the beginning of Nov.  I cannot wait until I finish building my new duck house so I can begin feeding them more protein and get them laying eggs.  I need the income.  I finally completed my pasture fencing so there is 3 times the forage area.

Nicole Alderman wrote:I just found this thread, and thought I'd chime in. We love coconut milk in our house, and it get used a lot, especially with my husband now being diagnosed with Crohns. 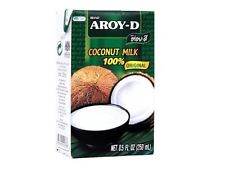 This is the variety we buy (https://www.amazon.com/Aroy-d-Coconut-Milk-100-Original/dp/B00JUB8N3G). Aroy-D coconut milk is in a non-bpa tetra pack, so it's a bit less toxic. Also, it has no additives: it's just coconut and water. Plus, it comes in convenient little 1 cup containers, which means we don't end up wasting much, if any. We don't buy ours through amazon, as the local asian markets sell it for $0.99/container (rather than $18 for 12 containers). But, if you don't have local asian markets, online is probably your best place to get it.

Tata International is the parent company that manufactures and markets Aroy-D coconut milk.  I would suggest researching this global marketing giant.  As "Permies" it is my understanding that we are working to heal the earth.  Tata International is involved in environmental destruction.  Perhaps this comment will be blocked perhaps not but TROPICAL TRADITIONS supports small family farming in the Phillippines.  If you purchase unsweetened shredded coconut and make your own milk there is no doubt about the ingredients.
show more
6 years ago
paleo

Dave Bennett wrote:I cannot answer that one.  I'm not familiar with the device.  I guess it is a soymilk maker and since my opinion of soy is that it is not suitable for human consumption I would not have a reason.  I don't eat legumes.

That is what it's called but you can make a lot of different milks in it. I make a lot of cashew milk in it. The one I purchased was the https://www.amazon.com/CTS-2038-Easy-Clean-Automatic-Stainless-Capacity/dp/B00BYMRCCM/ref=sr_1_2?ie=UTF8&qid=1476404377&sr=8-2&keywords=joyoung+cts-2038 . It has been a workhorse, I have had it for 6 1/2 months. Buying the ingredients, making my own milks, at two pots a day including the cost of the pot, I paid for it in three weeks over buying stuff from store by the carton. I'm wondering if I can make coconut cream in it or at least a milk (and sieve or nutmilk bag filter it after). I consume lots of different legumes in search of protein. It would be nice to add coconut to the choices... if anyone else has an idea about using a soypot for coconut, please share?

We've discovered a metal BETTER than firebrick! (Just one caveat)
Very interesting discussion indeed.  I tend to agree with those sticking with fire brick.  I use fire brick for the entire J tube.  The design is pretty much a standard RMH except the interior of the 55 gallon drum is also lined with veneer fire brick.  I currently have the stove disassembled because it is a "design in progress."  i have been using a rocket stove outdoors for the last 4 years that is made entirely of fire brick.  It is a J tube that is an excellent cooking device and has not demonstrated any heat stress deterioration..... Yet.  Since it is just stacked brick repair is a "Piece of cake" or in Paul's case a Piece of Pie.

I have been working on a heater that uses 2 55 gallon drums stacked that looks like one of those conventional stacked drum woodstoves.  My design if successful will use the second drum as the heat sink.  I want the RMH to be effective in heating situations that won't allow a large heat sink.  It will be moveable since both drums have removeable lids. It is quite heavy when assembled but can be disassembled down to bare 55 gallon drums.
show more
6 years ago
rocket stoves

coconut milk frustrations
I cannot answer that one.  I'm not familiar with the device.  I guess it is a soymilk maker and since my opinion of soy is that it is not suitable for human consumption I would not have a reason.  I don't eat legumes.
show more
6 years ago
paleo

I'm really pleased with how our Kickstarter is going right now.  Big thanks to everybody who has backed it!

I have enjoyed all the thoughts people have about nitrites.  It really shows that the people involved are educated and paying attention!

In all things we do with meat, we answer to the USDA.  They have exclusive authority over what we can and cannot put on our label (our very small label).
We do use sea salt and celery juice powder.  Both of those things have some amount of nitrites.  Nonetheless, the USDA defines that as nitrite free.  I personally think that
they should change their labeling requirements to say "synthetic nitrite free" just to be more clear.  More than anything its a weird labeling rule from the federal government.
Funny story about working with the USDA on labeling:  Most snack sticks out there have red dye in the casing.  For some reason it is not required to put 'red dye' on the label.
When we tried to write, "No Red Dye" on our label, and they wouldn't let me!  Go figure.  You are allowed to use it and not tell people, but if you go out of your
way to not use it they won't let you.

In terms of not putting our ingredients on the Kickstarter, that was my oversight.  We will put it on the FAQ page, which we weren't allowed put up until the campaign was live (which was Monday). We are super psyched about our ingredients, but in the rush of managing the campaign, I just plum forgot.
We're remedying that right now.  Should be up pretty soon.  Its on our website it that helps anyone in the short term.

Big thanks to Joel Salatin, who did on 2 occasions sell us some pork.  he was over stocked and we helped him reduce his inventory.  We met at a Mother Earth News fair where I was speaking about how to graze pigs and he was speaking about farming.  We gave him some sticks.  I guess he liked them because now we make sticks for him out of his pigs that he is selling locally to his customers.
I should say that the resulting snack stick flavor and quality has little to do with him though.  We raise most of the meat ourselves.  Once we have the trim, we grind it twice, naturally ferment it, add some spices (like sea salt and pepper) and then smoke it using real hickory smoke, (at a USDA approved facility, not our kitchen). We hope you love them, but if you don't, blame us, not him.

BTW, we are also homesteaders and live near other homesteaders. (Hi Mike!) Part of the reason we are started making a product is because we would like to see something that is controlled by farmers and not corporations. Most products are made by big companies who are not connected to the way the food was produced.

I love to answer questions.  Please feel free to write to me if you need anything at Roamsticks@gmail.com


Those screwy rules are certainly designed to protect Big Ag.  I have little use for the United States Department of Monsanto err... Biotech.... Uhhh.... It's sad that the USDA bears no resemblance to the department's original focus.  I do know that my idea is to avoid dealing with them.   I will work around them if possible.
show more
6 years ago
crowdfunding

coconut milk frustrations
Deb,
I didn't delve into the cholesterol issues and vegan diets because it is much too controversial.  The whole nutritional debate only germinates cacophony.  The problem that most often get completely ignored is the fact that doctors very rarely have the nutritional foundation to make any pertinent recommendations regarding diet. Dietary fats including cholesterol rich saturated animal fats do not create high levels of serum cholesterol.  That is absolute myth and any medical doctor that stated that it does is full of manure.  Nutritionally humans cannot thrive on a vegan dietary regimen.  Of course there are exceptions but those are exceptionally miniscule.
I have a background in ethonobotany but also human physiology and nutrition.  My graduate educational explorations concentrated on nutritional anthropology.  Anyway hopefully Trop. Trad. will have free shipping featured soon.
show more
6 years ago
paleo