Building Cob with no local clay?
If you want to get clay out of soil with not much clay in it there is any easy way that I learned of by accident. Find a gully or a big ditch that has really muddy water when it rains. Dig 2 holes in the bottom the first hole is to catch the sand. The second hole is for the clay. Throw all the dirt down hill of the 2nd hole to make a dam. If the runoff escapes form the pit it will carry the clay with it. You have to catch all the water. Once you have done that you will have a free source of clay that is replenished every time it rains. The clay you capture will probably be way to pure for Adobe and will need sand added.
show more
2 months ago
cob

Dryland Winter Cover Crop?
Thank you Tyler. I had finally found the name about a month ago but then I forgot it again. The species is also recommended by the government of New Zealand as fire control. I'm sure they spent a lot more money on determining that than I did. Probably 1000s of times more because I spent about 10 bucks on gasoline to haul the bulky plants that's it.
show more
2 months ago
cover crops
5 hectares in Yucatan stay for free
It hijido. You need mexican citizenship to own it. Any tree cutting must be approved by the hijidal commissioner. It's possible to change the classification to private property but there is cost involved and then there would be property tax although it is vary low.
show more
2 months ago
permaculture real estate

Bactris gasipaes common names chontaduro or peach palm
The pic below is a small type of chontaduro. 6.1% fat 41% protein 50% carbohydrates also high in amino acids and vitamins. Full of hairs but the taste makes it palatable. They are tropical but can survive here(Puebla2000m), my neighbor has a mature tree. Would make a great tree for silvopasture cus the fruit drops all year. Would also be a great staple food for humans.
show more
2 months ago
plants
5 hectares in Yucatan stay for free
It's for sale if you have or get mexican citizenship. $15 000 usd
show more
2 months ago
permaculture real estate
5 hectares in Yucatan stay for free
There is a very small concrete building sleeps one in a hammock or 2 if you put a bed. There is forest and a few Dragon fruit and piñuelas. There are guanacastle trees. There is a well. Rocky land.
All you have to do is improve the land while you stay there. And don't tamper with the mayan ruin area. You could set up tourism. If you put up a building.
Keep in mind that I will want the property back in about 5 to 10 years.
Santa rosa Maxcanú Yucatán terreno San Alexo. Get there and I'll see if Jose still has the keys if not you will have to cut the lock.
show more
2 months ago
permaculture real estate

Hand Weeding Sickle, by Truly Garden
I made one similar to that from a pool cue and a knife. I cut the cue just passed the joint  then unscrewed the joint and the knife had a hole where the handle was I put the screw threw the hole and used crazy glue and screwed it back together while the glue was still wet.
show more
3 months ago
gear 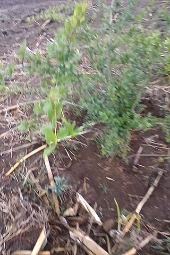 The farm in Puebla
Hi John. The climate here is actually cool because of the altitud (2000m). I was surprised when I first arrived. It's in a summer rainfall area with plenty of rain in summer but 6 or 7 months of drought in winter. The winter temperature can be anywhere from 26°C down to -4 at night and summer is usually 26 at mid day and around 15 at night. This year we where lucky to have no frost in winter.
show more
3 months ago
homestead

The farm in Puebla
As you can tell from most of the pics the current understory consists of mostly raspberry. In the future I will probably plant more Canna edulis because it does better in full shade. The raspberries will be pushed ever outward toward the edges, although raspberry is pretty shade tolarant too. Oh and I also hope to inclued much more dioscorea japonica and maybe other dioscorea as they are also extremely shade tolarant.
show more
3 months ago
homestead

The farm in Puebla
If you look really closely at the pic above you can see a few small weeds. As shade increases weed decrease dramatically. It's awesome to see all the right species and the high density come together to create a truly permenent food forest (still minimal weeding). If I where to disperse canna edulis more thoroughly and harvest it often enough that it doesn't take over weeds would be controlled even further but we would get Les raspberries. As the canopy has thickened we have started to get less pears from the old pear trees and there are a lot less chayotes. The chayotes that do grow will be way later too because their just not getting enough light anymore. Eventually if overall production drops off too much I will take out more side branches to let the light in and to encourage the trees to reach for the sky. I never cut the central leader and I don't worry about not being able to pick the fruit way up in the air. I simply pick it up off the ground daily or I shake the tree if possible. The only trees I prune regularly are Mulberry and capulin cherry because it's nice to pick those right off the tree. By pruning cherry I mean coppicing we burn the wood for cooking and we make charcoal. I also cook food for the pigs so we use more than your average family. Pigs love the cooked stuff, they don't waist near as much.
show more
3 months ago
homestead