large Hugelkultur Work In Progress
Just wanted to say excellent work there man! Make sure to come back with update pics of what it looks like over the years and when planted. One question--is the "C" shape oriented to where it catches water during heavy rains?
show more
8 years ago
hugelkultur
Hugelkultur materials, digging?
You can definitely build right on top of grass/dirt without digging. The thicker or bigger it is, the better and faster it will break down. Big logs(1-3 feet/up to 1m diameter) will take 10-20 years to decompose, small logs (2-12"/50-100mm) can be rotted in just a year with enough moisture and soil life. If you need to work the land later, just yank the big 1/2 rotted logs out and remove all the wonderful soil to use somewhere else.
show more
8 years ago
hugelkultur
Gary's Rocket Mass Heater
It is stainless steel. HVAC systems have massive flows of air, so yes in that use it would have resistance.
show more
8 years ago
rocket mass heaters
Gary's Rocket Mass Heater
You're not the first to suggest that the corrugated pipe could be an issue. I believe the smooth radius being a positive overcomes the corrugations as a negative, just as much as the sharp angles in normal stove-pipe elbows and tees being a negative then negate the smooth walls as a positive. If I could find a mandrel bent style 8" tubing, I'd be all over it!

The best flowing option would probably be to have a flat-walled and flat roofed(kindof a square) with a swollen chamber at the elbow/turn, similar to dirt bike exhaust manifolds. Lastly, the speed of the flow has a lot to do with how much negative pressure a short section of corrugated tubing will put on the system. On a car, the exhaust flow is pretty huge. On this heater, the speed of the gases 1/2-way through the system is like a light breath exhale, so the affects of eddying and backpressure are close to zero. All that being said, at this point it is working very nicely, so I'll be leaving it that way for now.

Just had an idea; Maybe I will remove that 180' elbow and coat the entire inside of it with refractory cement, creating a smooth surface. The heat at that point is never that hot(not enough to cause massive expansion/contraction and subsequent cracking/breaking of the putty pasted into the grooves). The grooves would provide a lot of surface area for adhesion, and I could even coat the surface of the cement with a high-temp slick paint that would mimic the surface of the galvanize piping. This may be the next evolution in efficiency. :O)
show more
8 years ago
rocket mass heaters
Gary's Rocket Mass Heater
Took me a bit to figure out the video link--a short burn video, because we all love to see and hear a nice fire burn. (have to click on it)

Why using an external chimney with RMH ?
I have an 8" RMH with a near 4-foot riser(a foot taller than usual) and 25-30 feet of piping in the basement of a single story house and experienced low draw/suck/flow until adding a chimney outside which went up to about the mid to upper part of the upper floor. I had originally had a horizontal output at ground level(walk-out basement). I still have a few things to modify and I changed things from the designed plans so I'm on my own learning curve. Definitely need a chimney at least as high as the top of the riser pipe I would say, and higher if in a tall house(or basement for sure).
show more
9 years ago
rocket mass heaters

Garden picture exchange!
Maybe the best pic for this season; 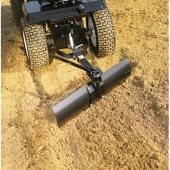 mending the roads
DR Grader. I have the 4-foot wide version and do 2 passes(each side of the road, which for me is about 6-7') for dirt roads personally, but it's made for gravel also. Got mine for $200(a STEAL), but I see them for $400-500 all the time. The design of the angle of the tines and blade and the operation is impressive to me. Comes with a remote control key-fob to raise and lower, and if you get a bunch of roots or debris stuck, you just back up which causes the swivel wheels to flip and lift the tines which usually clears them automatically. I've used a blade, box blade w/rippers, and buckets, but this is my go-to tool for maintenance of a path or road. Also can smooth out lumpy lawns without scraping too much of the grass off. And you can screw that tiny overpriced battery--stick a car battery in the sand bucket with sand around it and bungee it down--perfect weight ballast.