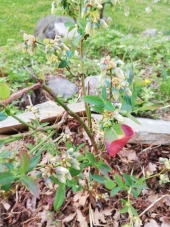 Did I do this right? New to permaculture methods-blueberries
The red color is nothing to worry about.  It is a natural response that many plants have to high light/hot or cold temperatures, caused by anthocyanins which give the color.

Plants produce the pigment anthocyanin for a variety of reasons, but in particular with blueberries they produce it to protect leaves against high light/low temperature conditions, which can cause photorespiration, damaging the photosynthetic apparatus.

No "spilling over" of pigments from the seed - the color has a specific physiological purpose, of course.

Paul was right again - watch out for killer compost!
We used compost from an undisclosed source in the bitterroot valley for a new community garden..msg me if you want to know, and definately it was contaminated with amino pyralid. All the veggies showed signs of weirdness...crazy budding without fruit, other hormone induced reactions, for at least two seasons. The industry argues that this chemical is better   (brand name of the pure stuff is milestone) because it kills fewer plant groups than many previously available herbicides. And you need less chemical per acre to do the same work. . However, it is very difficult to test for at commercial operations because it is active in the parts per Billion range, rather than parts per million, and seems to have a Much longer half life when not used exactly as described in the label.

That said, the industry isn't the only problem here, but people's desire for a technological fix for a problem that doesn't require extra work, or new cultural techniques. That would mean thinking.

Permaculture solutions for Scotch Broom
Tao brings up a great point about origins of diversity and ecological change in North American ecosystems.

Removing indigenous people from their historic lands and land management practices has changed the ecosystems of the Pacific Northwest (and beyond) in profound ways, and I see Scotch broom as part of that unfortunate story

Humans have been the primary force of change in the environment for millennia. Original Americans shaped their ecosystems in ways that created and maintained much of the habitat diversity, sometimes with precision and success, sometimes with blunt tools that could have unintended consequences. They didn't do it because natural living was their preferred lifestyle, they did it to survive, and did so using the tools, plants, and cultural understanding of the world prevalent at the time.

We modern Americans do exactly the same, but in an entirely different context of the tools, plants, and cultural tradition. One of the biggest change in culture between these two traditions, is that we no longer (with exceptions) depend on native plants for food, medicine, or fiber. Instead, native plants are somehow seen as special, or even sacred, which should be looked at but not touched, rather than useful parts of the human economy. Ironic result of the environmental movement.

Is it really any wonder many people don't care about the potential negative impacts of newly introduced species, and focus instead on 'how useful this strange plant from Eurasia could be'?
show more
6 years ago
plants

Author is unimpressed by permaculturalist views of 'invasive' plants
One of my favorite things about the permaculture movement (and I'm a skeptic to the core) is that it encourages a stewardship ethic of intentional diversity that has been lost in modern agricultural and environmental movements. Instead viewing the human dominated landscape as a wasteland (environmentalists) or a raw material (agriculture) permaculture encourages a movement back toward the Edenic vision of woman in her garden, where the fruits are sacred and the bees and beasts are close cousins.

That said, I believe that we have a duty to be stewards of places where humans don't live, as well. These wild landscapes, filled with diversity unto themselves, deserve consideration when we plan human landscapes.

Certain species are bad actors in certain natural settings. Period. When creating intentionally diverse food forests, permaculturists ought to be intentional about the plants they choose, to protect the diversity of the landscape they are a part of.

I Need a Definitive Guide to Plant Species and Propagation
I am a huge fan of the American Horticultural Society's illustrated manual of plant propagation. It covers a wide suite of temperate and sub-tropical plants by genus and species. Has loads of information about starting forbs, shrubs, vines and succulents from seed, cuttings, etc, including a number of grafting techniques. I work in the botany world, and have found it very useful for a native plant greenhouse, even though it is written for the horticultural trade. Of course, no book covers all bases, but this one comes recommended. Lots of photographs worked in with the text, and good advice on space saving methods, etc.


http://www.amazon.com/American-Horticultural-Society-Propagation-Plant/dp/0789441160 (don't forget to click through amazon via permie's link)
show more
6 years ago
forest garden
Do annuals have a place in carbon farming?

One of the reasons barley (and other grains) have become shorter over the past couple of thousand years is that there is a tradeoff between stem length and grain quantity. It's not quite as simple as SLxGQ=k, but in general the shorter the stem, the more grain you get.

To weigh in on one point brought up earlier in discussion. I recently was able to attend a lecture by dr vandana shiva. She pointed out that one of the major impications for the "green revolution" for subsistience farmers was this shift from using tall grain varieties that had lots of biomass but not very much grain, to varieties that had lots of grain, but very little biomass. In pursuit of more food (and they do grow more grain), farmers had to rely so much more on fertilizers to replace the nutrients and hummus that would usually result from letting the biomass decompose. Secondarily, more biomass allows farmers to raise livestock, who recycle the nutrients more quickly, and provide critical sources of protein. With the shit to the new system, many farmers are now producing more food, but in an system that is based on cash, not on actual well being of the people or soil.

Just wanted to point out that it's not about productivity per se, but there are larger social justice issues in play.
show more
6 years ago
carbon farming

building soil on sand
I'm not sure of your climate.....but if you are warm and wet (like Oregon) this may work for you

One of the larger community gardens in eugene Oregon used leaf trench walking rows as a way to generate organic matter in the top soil.

At that point, they would turn this year's footpath path (last year's leaves) into next year's raised beds, move the path over, and repeat every three years until they had a sufficiently good A and O horizon in their soil

Are bubbles a sign of pond health?
I second Ken Wilsons responses. Bubbles are a. Natural part of ponds and are not necessarily good or bad. Decomposing aquatic vegetation leads to bubbles, methane or otherwise.

You won't need to dredge unless you are letting the land above the pond erode and fill the pond in.

Hope you're using some of you big acreage to grow foods and not just let people camp.
show more
6 years ago
ponds 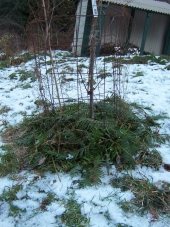 Ferns, the Epic Fruit Tree Mulch (...or am I missing something?)
Hey all -

Bracken fern is clearly edible, but may be one of those things that may not be a good idea to eat in large quantities.

Regarding the use of bracken fern as a mulch. Mulches that have a high carbon or lignin content can "lock up" nutrients that would be otherwise available to plants. This isn't necessarily a problem if you have sufficiently high quality soil around a tree, but in some cases could lead to decreased nutrient availability for plants, until the bracken suffiently breaks down.

From a quick search, Bracken fern litter has a high C:N ratio (77:1, compared to 20:1 for grass clipping), and tends to acidify soils where it decomposes.

If you wanted to use bracken fern around trees, but are worried about locking up nitrogen or acidifying, i would chop and drop, or make a pile, and let the bracken decompose for a year, best if mixed with other greenery, before adding around planted trees or shrubs.