Earthbags for sound walls?
As it seems you know, long straight walls are not ideal. Adding a few curves would help, but I am assuming you want to maximize space along a straight property line.

Adding buttresses along the wall would be another option to reinforce. Such buttresses could potentially be multifunctional. For example, a 4 foot deep raised garden bed formed of earthbags on one side would add some stability to the wall. A shed, chicken coop or mini-greenhouse built between buttresses. A cob bench or outdoor dining table. Tea or meditation room?

In the big picture, it doesn't sound like the wall will serve a structural purpose in your home, so it probably doesn't need to be heavily overbuilt. What's the worst that happens? A 10-foot section starts to lean and eventually falls over?
show more
8 years ago
earth bag

AZOMITE rock dust; Is this stuff radioactive?!!! YUP, its hot alright.
My geiger counter is calibrated for gamma from cesium for when we travel to Japan, not sure if this will be helpful or not? Anyway, if I find myself near a bag of rock dust, I'll check it out. Wonder if the potassium in Azomite might be causing the beta radiation? No way around that. Potash is hot as well.

Decomposed granite around here (socal foothills) is moderately radioactive, and gives off radon. Ambient readings here are usually higher than many areas of Tokyo post-fukushima. As far as I know, uranium does not bioaccumulate like cesium, strontium, iodine, etc., but it's still very toxic.
show more
8 years ago
soil
Solar energy sharing in Japan and Farming
A bit of tangentially relevant history: The reason for Japan's small farm size is US policy in the postwar era. Prewar, there were a large number of basically landless Japanese peasants in semi-fuedal rural Japan. US wanted to prevent the peasants from turning communist, so they enacted land reform, breaking up large landholdings among the poor. These newly enfranchised farmers became staunch supporters of property rights, capitalism and the pro-American LDP that has dominated Japanese politics for more than half a century. With rural depopulation and aging demographic among farmers, it will be interesting to see what happens to this voting bloc over the next 2 decades.

Japan Agriculture (J.A.) is a huge national agricultural co-op, that wields quite a bit of political clout and is organized in every farming community in Japan. Assuming J.A. favors solar farming, it bodes very well for solar farming. They can throw some weight around with the government in Tokyo and organize very effectively in rural communities. It is also worth mentioning that Panasonic, Sharp & Kyocera are all major PV manufacturers and powerful economic forces as well. It must be understood that Japanese rural communities already draw a significant portion of their income from national government spending or protective tariffs for rice and other products. Solar feed-in-tariffs will only exaggerate this pattern - but they may prevent the Japanese countryside from being entirely abandoned and overrun by monkeys, wild boar and bamboo.

Ellen Schwab wrote: SE Ohio is quite lovely in weather and scenery. The ground is mostly rolling with a few very steep sections.

SE Ohio is indeed quite lovely. I am quite fond of those hills. Family brought me to the west coast & moving back east isn't an option, but the opportunity sounds like a good one.

Adult adoption is a common pattern in Japan when there are no heirs. The adopted children work the family business and eventually take over the business and household. My wife's aunt is such a case. She started working for the family when she came from Tokyo as a young adult, and maybe 35 years later took over the family business, and then cared for her adopted parents in their later years. She is now in her 70's and will likely adopt a young adult - if she can find anyone with the falling birth rate in Japan.

Anyway, I wish you the best of luck. Sounds like win-win for the right people.
show more
8 years ago
intentional community
ego
The problem with the term ego is that everyone has a definition of it, so it becomes a bit of a meaningless term. It means one thing to psychologists, another to buddhists, another to new agers and another thing in pop-culture. I am a student of buddhism, but avoid using the term 'ego' when possible, because people are likely to misinterpret based on their own understanding of that word.

Buddhism (not unlike permaculture) is based on the practice of observation, primarily of the observation of one's own mind. Classical buddhist texts describe the internal processes that lead us from having a body and sensations through to the conclusion that we have some sort of stable self that is separate from the rest of the world (ego). They also speak of a process of self-reification, which is a sort of confirmation bias - we believe we have a separate self and our mind reconfirms it second by second.

It's not that we don't exist, it's just that, in the buddhist worldview, our 'self' isn't quite as solid, separate and permanent as we tend to think. Where do I end and the world begins? Can "I" really exist as an independent phenomena?

It can be compared to an ecological worldview: Where does the plant end and the soil microbiota begin? Hard to say. Even in our own bodies, bacteria far outnumber our own cells. They are not just in our gut, but in our brains and everywhere else. Evidence suggest the bacteria exert significant effect on our thinking and behavior. (ex: toxmoplasma gondii, the crazy cat lady bacteria).

With ecology, it's quite a problem for us to isolate anything from anything else, and obsession with separating this from that has resulted in the precarious gambit of agriculture and civilization as we know it.

This is, perhaps, the central point of buddhism: You can't separate this (self) from that (other) - and the full catastrophe proceeds from the mistaken belief that you can. The belief in a separate, solid, permanent self (ego) creates human suffering in the same way pulling the cow out of it's pasture and sticking it on a feedlot creates suffering for everyone involved.

Albert Einstein summed up almost the entirety of buddhism in one succinct paragraph:


A human being is a part of the whole, called by us Universe, a part limited in time and space. He experiences himself, his thoughts and feelings as something separated from the rest-a kind of optical delusion of his consciousness. This delusion is a kind of prison, restricting us to our personal desires and to affection for a few persons nearest to us. Our task must be to free from this prison by widening our circle of compassion to embrace all living creatures and the whole nature in its beauty.

As for calling out PW or anybody else on their 'ego', I don't see the point. Here's my favorite quote on egotists from Ambrose Bierce:


"An egotist is a person of low taste - more interested in himself than in me."

Growing Grapes Over "Green" Gravel Covered Roof
We have a grape arbor around 3/4 of the house, and they definitely will climb over our asphalt roof without problem, even in 100f+ Grapes drop their leaves earlier than most deciduous trees. They are dropping right now here, just as we want a little more heat to get into the house. 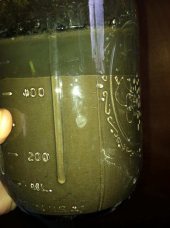 John Elliott wrote: If it is 15% "coarse fragments" you should be able to get a fine screen that will hold back that fraction. Some bacon spatter screens that you can buy at the dollar store have a mesh that size.

We've got lots of coarse silt fragments in our decomposed granite. Better to screen them out? What difference does it make?
show more
8 years ago
soil
plantmaps.com, great maps with climate info, range maps for plant species, etc.
great maps, easy to use.

Eric Markov wrote:
My wife's mother, who is from Taiwan, mentioned that during WWII & the Japanese occupation there, the locals relied on sweet potatoes to survive.
The Japanese saw it as peasant food and demanded other foods/meat.

The tops were stir-fried. Also tubers would be sliced into thin strips and dried. They could be stored this way for a very long time. Then they would just boil the dried strips into a soup.


When things got tough in Japan later in the war, they fell back on sweet potato as well. Many asians look down on SP as animal fodder, but plenty of people eat them, too.

Dried sweet potato (hoshi-imo) is still eaten in Japan as a snack food. There was some guy in Ibaraki prefecture doing Fukuoka-inspired Natural Farming and making a killing selling dried SP in Tokyo.

Here in Los Angeles, you can find the leaves & shoots at Farmer's Market, and elsewhere sometimes in Asian Markets - a cheap way to get slips for growing your own SP.

the existing empire strikes back

Most people attracted to Permaculture are young, dreamy idealists looking for some kind of system to structure their activities and impart meaning. It does not matter much whether things ‘work’ because you are not obliged to depend on them. It is their symbolic value that counts. I have encountered numerous ‘permaculture gardens’ with abysmal levels of productivity that have nevertheless persuaded their creators that they are virtually self-sufficient in food.

While I certainly fit the profile of a not-so-young-anymore dreamy idealist with abysmal yields, this is a luxury afforded only to first world permies. The author should take a good look at the success of permaculture in the 3rd world. Africa, India, Southeast Asia, Latin America...
show more
8 years ago
meaningless drivel