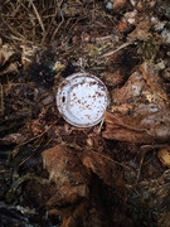 "compostable" plastic test
I stopped trusting this stuff completely when I heard that some "compostable" products are made of microplastic particles glued together with something compostable, so that the non-compostable stuff slows down the decomposition of a material that would normally decay before consumers were done with it. If that's true, then even a "success" with compostable packaging might be doing more harm than good.
show more
2 years ago
composting
coppice syrup
Forgot to mention that certain trees, like hornbeams, tend to grow multiple trunks without interference, and I think that works just like coppicing. If so, some people could test this idea without even coppicing a tree themselves.
show more
2 years ago
trees
coppice syrup
Several years ago, a new method of producing maple sap for conversion into syrup was announced. What the researchers did was grow many small maple saplings, then cut their tops off and suck sap out of the end with vacuum equipment. This lasts for something like 7 years before the trees die and need to be re-planted.

Multiple people, including the original researchers, have considered that this would be more sustainable if coppiced trees were used, with one limb/trunk (I don't know the coppicing term) being cut and sucked at a time, while the plant as a whole can continue growing. This could also allow other products to come from the trees if it works right. The problem is that there doesn't seem to be any record of someone trying this yet.

So I came here to ask: has anyone tried this (and just not mentiond it), or would anyone be willing to try it?

The most obvious thing that we would want to learn is whether this allows the tree (or other woody plant) to keep growing at all - if not, then there would be no point. We also need to know things like whether the growth of the tree is affected somehow by sap extraction, whether this makes previously non-viable trees into commercially viable sap trees, whether this can dry out the ground and kill guild plants, and whether sap can be harvested out-of-season.

If you have a coppiced tree on your property, but you've never thought about making syrup before, you might be able to try this more easily than you think. I found an Instructable for making a solar-powered vacuum sap harveting system for about $260. That just leaves figuring out how to apply it to the end of the wood instead of a tap. Converting the sap into syrup isn't really important, since that topic is already well-covered.

Here is a list of plants that I think have potential to be tested for this:
maples (Acer spp., likely including strange ones like vine maple, this is the standard on the market)
birches (Betula spp., probably the second-most popular after maple, produces after maple by a different mechanism, tastes spicy and savory, burns if reduced by only boiling)
alder (alnus spp., much like birch)
hophornbeam (Ostrya spp., like birch but produces even later, wood might be quite valuable in poles)
other Betulaceae plants (all of them should be much like birch)
lindens (Tilia spp., produce bast fiber and edible leaves too)
plane/"sycamore" (Platanus spp., the syrup tastes like butterscotch)
walnuts (Juglans spp., probably varies a lot between species)
hickories and pecans (Carya spp., a version made from bark and sugar is more popular, but the relationship to walnuts makes it likely)
all grape vines (Vitis spp., well-regarded as a survival source of sap)
other Vitaceae vines (probably, since others can climb to the canopy like the recognized grape vines)
chestnuts (Castanea spp., rumored)
beeches (Fagus spp., rumored)
apples and crabapples (Malus spp., just a guess, would be good for sour candy)
mulberries (Morus spp., just a guess, seems to produce bast fiber)
osage orange (would produce orange dye with potential medicinal value, but risky to both equipment and health)
tulip tree (Liriodendron, reports seem to refer to flower nectar rather than syrup, but extracting sap might work anyway)
poplar/cottonwood/aspen (Populus spp., rumored)
elm (Ulmus spp., rumored)

edit: removed the latex and resin entries because I'm about 80% sure that they don't work like that anyway.
show more
2 years ago
trees