budding of fruit trees
This morning I noticed my peach trees flowering, these are the trees waay out of their fruiting zone. I still have them in pots and planned to ground them this weekend.

If the tree flowers does that mean a fruit is next? Im wondering why they would even be flowering this time of year with the cooler weather approaching?

Maybe it would be a good idea to remove the flowers? Is this what pinching off means?
show more
8 hours ago
fruit trees
Any beekeepers here

bruce Fine wrote:just wondering--do you need a license or permit to keep bees in Marion county?
when I moved I contacted the state about what I would have to do to take my bees across state line and that's where you need a license and hives have be inspected by FDOA. and turns out Georgia has built a bee firewall and its very difficult, expensive and nearly impossible for a hobbiest bee keeper to transport bees out of Florida.

https://edis.ifas.ufl.edu/aa264
show more
1 day ago
permaculture
Any beekeepers here
Im seriously considering getting my license, sometime in the future, anyone here at all interested in this? I know nothing about bees but like honey and I like that they help pollinate things.

bruce Fine wrote:certain thing naturally grow well in certain places. theres a reason why for example cherries do well in places like Washington and Michigan and apples also grow well in the north and almonds in California and peaches in Georgia and South Carolina and citrus in Florida, high bush blueberries in New Jersey and the latest rabbit eye varieties not far from you in huge plantings in places like floral city

Citrus and muscadine grapes seem to be truly reliable here. Citrus is in big trouble though. Thanks
show more
2 days ago
trees 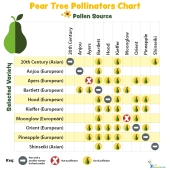 It also notes that it's a late blooming flower. I suggest looking for two other late blooming varieties that work in your growing context.


Thanks, this publication https://edis.ifas.ufl.edu/mg367#FIGURE%202 states that no cross pollination is needed. Quote : Baldwin’, ‘Kieffer’, ‘Orient’, and ‘Hood’ are self-fruitful.
show more
2 days ago
fruit trees
budding of fruit trees
Stupid question for some but as Im reading what I can about fruit trees and listening to what people are telling me Im thinking that just because a fruit tree has a high chill hour requirement and those requirements are not met dosent necessarily mean that I wont see fruit, from what Im understanding it may just mean that I do not see an abundance of fruit or very little to none.

Id also like to know if a fruit tree is planted in a less than ideal location ( not enough chill hours ) does the tree suffer at all in health? Im guessing that a fruit tree was put on this earth to produce fruit, thats its main purpose and does the tree have more susceptibility to disease/sickness if its not able to fulfill that?

greg mosser wrote:all the kieffer trees i know around here don’t have any other pears around and reliably produce.

Seems like fruit production for anything is hit and miss with some being more reliable than others, at this point Im wanting to plant the trees, get them established over the next few years and then worry about getting fruit. It will be easier once I am living on the property
show more
3 days ago
fruit trees

greg mosser wrote:what about them are you looking to know? and what in particular are you hoping to pollinate with them? i don’t have any at my place, so don’t know much about how well they pollinate other things, but there are a few trees around my area.

the pears themselves are okay eating but are generally considered a pretty low-grade pear. they tend towards having more ‘sand cells’ than any other pear i know, never lose their crunch, so they never get that ‘melting’ pear flesh from the better european pears in their ancestry, and while somewhat sweet, don’t have much of the more complex flavors of the asian pears in their ancestry. a friend likes to press them as if for cider, and then boil that down to a syrup, which makes a pretty nice pancake-syrup like product. trying that with other pears concentrates the flavors to the point that they get unpleasant, since tannins and acids (when mixed with the sugars) are what make most good pears taste so good. kieffer is a bland enough pear that it works.

Keiffer needs a pollinator to produce fruit consistently, Id like to know what other pear will work. Thanks
show more
3 days ago
fruit trees