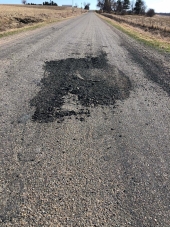 Crozier wrote:The issue is that it doesn't directly deal with the dust. Dust can cause visibility issues, not to mention dust from gravel roads has some pretty negative health impacts from long term exposure which affect humans and animals. It has also been shown to have a negative impact on plant growth, and harmful to waterways. I have spoken with several landowners who have planted trees to deal with dust who noticed that during very dusty years the trees are noticeably stressed and have even died. By the way, companies that sell stabilizers use these facts to spin their products as being more eco friendly than natural gravel, which I don't really agree with (seems a bit like the "lesser of two evils" situation).

I think the trees DO deal with the dust. They trap it on their leaf surfaces until the next rain when it is washed down into the soil.
Furthermore there are trees who can handle a lot more than others.
For example the yew (taxus) is notorius for being abused and still surviving...very toxin-tolerant...to my knowledge the only conifer that sprouts back from
the ground after being cut down.

Also i find the idea that companies sell that salts are more environment friendly than trees almost comical if it wasn't so sad.
show more
23 hours ago
rural

You sure? I was just warned in another tread, that a south facing slope is risky for an orchard,
as the early warming might induce early flowering and thus loss of flowers in case of a cold snap.


greg mosser wrote:i don’t know how much of your future food forest plantings will be fruit trees, or how much of a danger late frosts are in the areas you’re considering, but if fruit trees are to be a major part of the planting, a south-facing hillside that warms up early may not be a positive feature. orchards of early-flowering fruits (which can include apples, pears, and stone fruits among others) are often better off (for our purposes) on somewhat north-facing slopes where the soil warms up later, so flowering can avoid the last late frosts.

saving roads ... avoiding the dreaded gravel
What happens to those gravel stabilizers after one year? Those compunds don't sound really healty...do they make the dust more dangerous in the long run?

From a permie perspective, wouldn't it be more feasable to have the "natural" gravel road, and sufficient plants on either side of the road to catch the dust?
I ask this from a very naive perspective, because i have never been there and don't know how big the dust coulds get and how hard the wind blows.

edit: Another train of tought: if the problem is water underneath the road, maybe there are plants/earthworks who can wick the water away without damaging the roads?
show more
1 day ago
rural

inspired by a video from curtis stone i am really wanting to start market gardening.


Now i really want to go start the beds, however it is recommended to first build the post harvest station.

While it seems i could replicate what is shown in the video,
i have another specific requirement:
I want do build my post harvest station into a vehicle,
so that i can use it on different locations, as my current
plot is too small( ok, not too small per se, but i planted it with trees).

So i am looking for some smart ideas as inspiration.

Oddly the search here did not give me anything,
so do you have something to share?

Any input is appreciated.
show more
1 day ago
market garden

Sloped or flat land for a permaculture market garden?
Just to make sure we are on the same page:

When i say 15% slope it means a 15 units elevation change for a horizontal traverse of 100 units.

This is very natural for as every aspect of my life (for example road signs) defines it that way.

So i just wanted to make sure whether the previous posters have the same definition of slope as i do.
show more
1 day ago
permaculture

M James wrote:In my opinion, you shouldn't even consider a small dog ror that job. Predators won't see them as anything other than a meal. That would really suck for the poor dog.

That depends on the predators. I agree that if you are in wolf-country you need larger dogs.
In the above setting with the jack russels, there are no wolves.
Very rarely a bear. Mostly fox. And jack russels were specifically bred to hunt foxes.
And even a bear would be chased off by a pack of jack russels, those little dogs are really vicious.

Also the wild boars in the area are chased away.
show more
3 days ago
predators
Growing sun-tolerant paw-paw seedlings -- all it takes is a 50% sacrifice?
Not having any pawpaw's:

I suspect it is a big difference whether you direct seed into full sun vs. transplant from nursery.

So when posting your experience, please include this data.
show more
3 days ago
fruit trees

Sloped or flat land for a permaculture market garden?

It seems that so far the flat land is better than a slope of around 15%.
But still perfectly flat land has some disadvantages.

So how steep should land be at least to have gravity based irrigation and no frost pockets?
How steep can it be to not require terraces for market gardening?


greg mosser wrote:i don’t know how much of your future food forest plantings will be fruit trees, or how much of a danger late frosts are in the areas you’re considering, but if fruit trees are to be a major part of the planting, a south-facing hillside that warms up early may not be a positive feature. orchards of early-flowering fruits (which can include apples, pears, and stone fruits among others) are often better off (for our purposes) on somewhat north-facing slopes where the soil warms up later, so flowering can avoid the last late frosts.

Thank you very munch greg. It is kind of embarassing that i spent almost 2 years reseaching permaculture andnot thinking of this issue.
I probably did read it somewhere, but forgot. So i read more about south facing slopes
the last two days and found a remediation strategy in another thread ( https://permies.com/t/159308/Late-Frost-Protection ):


Johannes Schwarz wrote:
- terracing. Terraces improve not only water retention but their level surface also decreases the angle to the winter/spring sun, thus the ground does not warm up as quickly. Snow stays visibly longer which proofs the point. One point with stone terracing though - as in my case - the stone wall retains heat which is great in cool summer nights and it protects from cool winds but that of course counters the desired delay of the ground warming up in the spring as well.
- mulching? Can mulch in a certain thickness isolate not only the ground against freezing but also from warming up too much? Anyone have experience with that?

So again we talk terraces.


@ Skandi Rogers :
In another thread about a 20% slope https://permies.com/t/120024/Potential-homestead-slope-Kitchen-garden
when asked wheter a kitchen garden is possible you wrote:


Skandi Rogers wrote:
Yes that slope is not a deal breaker, there would be no need to terrace.

Did you change your mind on the need of terrace on slope, or is this
because of the different context (kitchen garden vs. market garden)?

Thanks again a lot to all of you!

Shawn Bell wrote:We had to cage our Jack Russell, apparently they are bred for hunting.  She took out two of our laying hens.

A friend of mine has 3 Jack Russels as "guardian" dogs. They do not specifically guard the hens, but they are so
agressive towards the wild animals that foxes etc. do not come close to the farm anymore.

One of the dogs is the mother of the other two, and in gereral they do not attack the hens.

However the dogs siblings sometimes come for a visit, and if one of them starts going after a hen,
the others (expect the mother) quickly join in.
So far no hen has been killed, but one of the Jacks is almost always in the penalty-box.
I assume it they would live on the farm year-round and be trained to not chase the hens it should work out.
But keep in mind that each of those has their own character, so you may run into a Jack Russel that
cannot be trained to be friendly, but i think the chance is rather low.

That being said, if you want a small dog to chase away predators, my first choice would be a jack russel,
but it takes a lot of work and patience.

If feeding costs are a issue, i would consider a Tornjak, which is a breed that has been used as LGD in the balkans
for so long, that it is adapted to a more carbonhydrate based diet, more similar to what humans eat.