EMF/WIFI sensitivity in an increasingly EMF-filled world
We were given the option to opt out of the smart-meter, but have an extra $5 a month fee so that the electric company can send someone out to do the reading every once in a while. We can submit our own reading every couple months to keep billing info more accurate.
I have a friend who has been wrapping his meter successfully in aluminum foil. He uncovers it every once in a while so the info will send without the company coming to inspect it.
We've also recently just had our functioning streetlights changed. I've read that part of the 5g system could be incorporated with streetlights, so perhaps that's what happened, but I'm not sure yet. Something else to watch for though I guess..
show more
1 month ago
personal challenges
Physalis breeding
I think we have some Physalis heterophylla growing in our garden. We plant an annual variety, not sure which one, but a perennial type also showed up. It has sticky fruit that get a little larger than our other variety. I'm pretty sure I've seen some ripen to a dark orange color. I prefer the taste of the annual fresh, but the perennial could maybe be used for jams or something. It spreads with rhizomes and comes up again and again after pulling.. ..but we haven't been too aggressively trying to control it.

We have a few of the perennial ones fruit that were harvested with the others that are still mostly green. I'm not sure if the seeds are viable, or if they could've crossed with our other variety. I could probably send some seeds your way if you'd like. We should also have plenty of plants to dig up in the spring once the snow melts..
show more
1 month ago
seeds and breeding
update on optimal inoculation duration
"J Brun-It is in an extremely aerobic situation for 23 hours and 58 minutes of the day. It just gets drenched once per day, so that is definitely aeroblcally dominated. " My comment was more focusing on maintaining the liquid in an aerobic state to ensure the next dose would contain mostly those microbes for re-innoculation. but.. Perhaps the pouring in and out each day is aerating the liquid well enough, or maybe whatever anaerobes that would be transferred back would feed the aerobic ones left in the char-mix.
show more
3 months ago
biochar
update on optimal inoculation duration
"If you see something that I should do better, please let me know in a constructive way. " I'm not going to say you should do anything different, because you seem to have way more experience with this than I do.
I either add my char to a compost pile, or dig a hole in my garden bed and pour some water soaked char, (large pieces of char in a bucket with liquid, mixed and only slightly broken up,) in the bottom, then kitchen scraps etc on top, then fill the hole back in. I haven't yet noticed any problems with it, and the soil seems to be improving..
If I were to add anything to your process, it would be to maybe aerate the liquid with a bubbler when it is not soaking in your char mix, or just leave it in the bucket and aerate the whole batch for the time it is soaking, to ensure it all stays aerobic... ..although the benefits of good-anaerobes in deeper soil that has been mentioned is something that seems worth considering.
show more
3 months ago
biochar
Removing yellow jacket nest from chicken coop
I usually put on a couple thick layers of clothes and tuck everything into eachother. (wrists and ankles can be rubber-banded.) I put on safety glasses, a mosquito netted wide-brimmed hat, and a hoodie over that. I get a small can that I use for making a small smoking fire. The mosquitos and biting flies don't give me much time to plant in the spring if I don't carry some smoke with me. I set up the smoke in a place I can escape to incase I'm being swarmed, but where it also lets it blow a bit where I'm working in hopes to slow down and confuse the wasps a little. I get a metal can large enough to fit the nest in, and add a teaspoon or so of gas or similar inside for a hopeful quick death. I bring a sharp putty knife, a fly-swatter, and a can of hornet-spray.
I find with the mosquito netting, the wasps don't recognize me much, so the first attempt to get me I flinch. Afterwards I am pretty confident in my gear and just get the job over with, and I'm often up on a ladder so calm is important.
I wait until just before dark when they seem to be quieting down, and watch the hive for a while. Usually there are a few wasps in and out of the hive. I try to wait until most are in the nest.
I take the lid off of the can and lift it up until the nest is inside and cut the nest down with the putty knife. I quickly put on the lid and set the hive aside where I won't knock it over. Then I use the swatter to get rid of the ones who weren't in the nest.
If any are left, they will likely re-build in the same place or nearby, so I try to get them all. I then spray a quick shot of bug spray where the nest was to discourage the rebuilding in-case I missed some of them. I'm not sure I would spray in the chicken coop.. 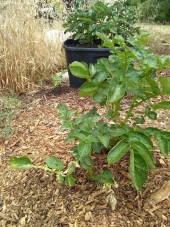 Growing potatoes -- methods and musings
Scott,
It's been awhile since I've seen a slip like that, lots of eyes covered in that bunch! Nice bed, by the way. I also planted a bunch of store-bought potatos this year, hoping they start growing soon. I'm not big on the doom and gloom much either, especially in gardening. I even sometimes appreciate a good laugh if things don't go quite as planned, especially with all the stress lately..  Thanks for sharing!
jim
show more
7 months ago
plants

Building a raised bed with hugelkultur, can I check that my plan is okay?
I think using soil around the logs will prevent the level of the bed from lowering as quickly due to settling and decomposition. It will also make it less easy for rodents to tunnel. We had mice in our first small hugelmound. Eventually, I filled the holes and anywhere else I could stick my fingers in with more soil. I've also since extended that mound, and have built a few others. The ones I've packed tightly, I haven't noticed any mice since. The ones where I just lightly covered the logs with soil and sod, I've seen lots of squirrels and mice tracks.

Using soil instead of pine needles will also give roots a more consistent soil pathway to the native soil below, incase you grow any deep rooted plants. Pine needles can tie up nitrogen when buried until they break down. As a mulch they work well. We've used mostly pine needles, and chop-and-drop plants as mulch. We usually have a short season, so I'm planning on raking the mulch into the paths this year, to warm the beds faster, until our usual summer heat and lack of rain comes. The mulch should help keep the soil cool and retain some of the moisture. We have municipal water and try not to use it for the garden unless it's really dry.

Building a raised bed with hugelkultur, can I check that my plan is okay?
Hey,
I think you have some good ingredients, but I would likely layer them a bit differently. I would leave the wood on bottom, then add enough garden soil/sand to fill all the holes and gaps, then the less rotted compost on top of that, then a blend of the bagged compost and more native soil on top. If/when it gets too hot/dry outside, I would add the pine needles as mulch to retain moisture. In the end, it should all break down either way and make some nice soil.
show more
9 months ago
hugelkultur