Artichokes on hold for about 2 months
Hello,

Early February, I planted in pots a few artichoke seeds. 4 of them grew, and I planted them about two months ago. However, for the past two months, they have not changed at all. They had a few leaves eaten here and there, but it's as if they stopped growing. I don't water a lot, however I'm not seeing any leave wilting, and there are still some rain, which should at the very least make them grow a bit even for a few days, as far as I know.

Here's a picture of the three artichokes (I had to replace one, as it had been completely eaten):

Is there anything I can do to help them grow ? What did I miss ? The soil is clay-ish, but had grass growing before I tilled the spot. I didn't add much organic content or compost.

Or should I just dig them up, throw them in the compost, and plant something else now ?
show more
6 days ago
gardening for beginners 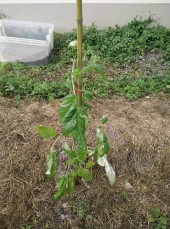 Tomatoes in distress
I left them in the shade for a while, to avoid having them grow too much. So those would only be sunburns ? Will the plants adapt quickly, or do I need to do something ?
show more
1 week ago
gardening for beginners

Tomatoes in distress
Well thanks you everybody for the replies and tips, so two days ago I did it, and also added some shredded nettle leaves at the bottom of the holes I planted them in.

However most of the plants are looking really weird, do anybody know what's happening, if it's just the transplanting shock or something worse ? 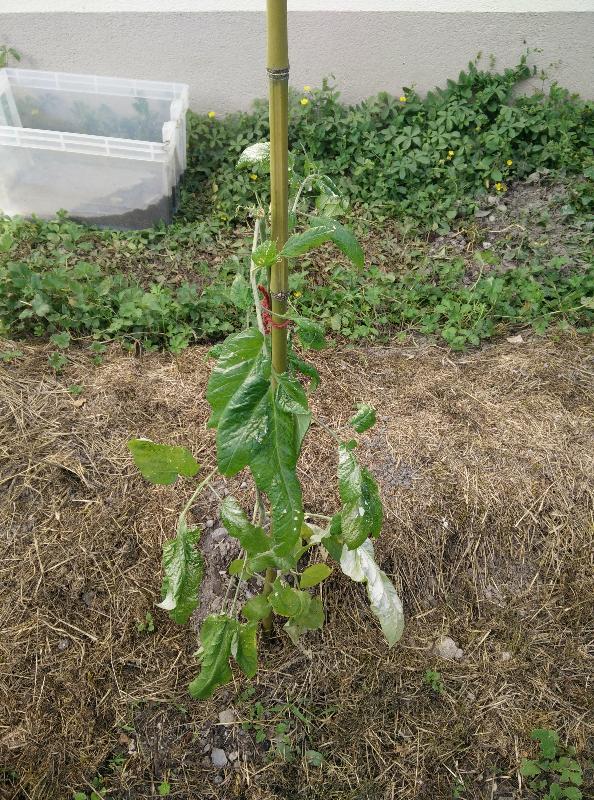 What can I do to stop this ? The leaves looks like the plants are thirsty, but there's those weird white/brown marks on the leaves... I watered them a bit in the early morning or late afternoon, never directly on the leaves.
show more
1 week ago
gardening for beginners

Tomatoes in distress
Hello. Early February, I decided that tomatoes would be taken care off properly, so I sew a few seeds in individual pots. About ten plants grew, and I put them all in the same, bigger pot.

Now, I have those same ten plants, about 4 feet high, in the same container. I want to plant them very soon, and as it's too late for them to have their own separate pot, I will need to somehow untangle most of the roots. I know some plants need to be planted with the lump of earth they grew in, and avoid disturbing the roots. But here, I won't have a lot of choice.

I want to know, can I disturb those root, AKA use a lot of water to "wash" the earth around them so that I can separate the plants, and then plant them without killing them, should I split the lumps that are around the roots without disturbing them too much, or something else I haven't thought off ? I'll need to do something as planting ten tomato plant (about one inch next to each other) is pushing it, but I want to minimize the damages...
show more
1 week ago
gardening for beginners 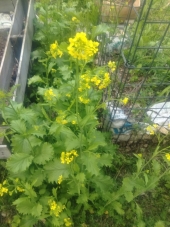 What is this? Mustard greens?
Flowers definitely looks like mustard, but the leaves seem a bit off. Have you tried tasting one of the leaf ? You might need to do it several time if you don't taste anything, but if it taste a bit spicy it should be mustard.

If you wait a while, it should go to seed and look even easier to recognize.
show more
2 weeks ago
gardening for beginners
My wheat is laying down because of the wind, would it be a problem for my future harvest ?
It's the first time I'm doing this, and since it takes about a year, I really want to get something back, even if I'm just experimenting.

I'll watch out for mold then. Thanks you two for your answers !
show more
2 weeks ago
grains and pseudograins
My wheat is laying down because of the wind, would it be a problem for my future harvest ?
Hello,

A few months ago, I planted some old variety of wheat in a 100 square ft area. I had tilled the spot (blasphemy, I know). This is purely to try growing my own wheat and hopefully make my own flour, it's not a commercial setup or farm.

However, the area I live in is windy, and I've noticed that a few stalks are laying down and staying down; they are not broken and are still alive. Having never sown wheat before I don't know if I should do something; do I need to add some soil to avoid this, or can I just let those stalk lay down, will they still produce grain ?

Of course the harvest will be entirely by hand, so there's no issue with any machine.
show more
2 weeks ago
grains and pseudograins

I was offered a hand mower when I moved in, but at the time I didn't see the need for a bag. Right now I'm letting the grass grow tall, and cut it by hand to get a good amount of mulch. I also like the aura of wildness this give to the garden. Death to the lawns !

I'll see how I'll do with seedling. the cucumbers I have seemed to appreciate direct seeding much more, I'll see probably do a mixture with the squashes of direct seedling and transplanting.

As for the squash bed, I'll try to just lay some soil instead of digging, and add some manure and my first batch ever of compost. I'll also put nasturtium and radishes there.
show more
1 month ago
hugelkultur 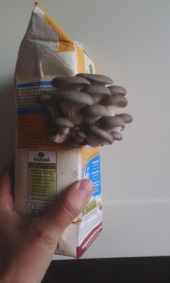 Trying to grow Oyster Mushrooms, but as ecologically as possible
I tried growing my substrate into food containers where I had drilled holes in them, however the three time I did it, every time green mold grew there, so I'm not sure about using a bucked instead, as long as I don't have some form of guarantee that I won't be growing mold. I think that I should put much more mycelium in those boxes, so that the green mold get out-competed fast.

Right now I'm going to experiment a little more with this. I've found a website that sell autoclavable bags, that should reduce waste. I've had an idea, using those bags as incubator for the spawn to colonize the substrate, and then put the blocks directly in wooden box with holes drilled in them, having maybe a variety of woods, some like poplar that can and will be eaten easily by the oyster mushroom, and other box made from more robust wood. Though so far it's going to be difficult to make those box since everything is closed.
show more
1 month ago
fungi

How can I make sure this spot is good for squash, cucumbers, nasturtium, radishes and a few others ?
Hello,

I am getting started into permaculture, hugelkultur, well basically anything with culture in the name (except monoculture).

I have this plan, of having a spot with cucumbers, squashes, nasturtium, radish, so that they can all benefit from each other. Right now, this spot is not in the best shape. At first it was only grass; I wanted to do some form of hugelkultur, although it's far from perfect.

I live in a 8a climate. The spot is a slope (about 13 degress), about 8 square meter. I buried a bit of wood, as well as some coffee ground, trying to create some kind of hugelkultur; however I buried at most big twigs rather than actual tree trunks, for a lack of better material. I removed all the grass above, tried to get back as much dirt from it as I could; in some case I just turned upside down the "block" of grass, as to win a bit of time and hopefully have it decompose and feed the soil.

The soil is clay-ish as far as I know, and I have sown a green manure a few weeks ago, with the intent to cut it all and use as mulch cover. The one that grew was phacelia, and it look like it's the only one there.

Here is a picture. So far, the only plants that are supposed to stay are some thyme, dill (both on the right but we can barely see), and artemis annua (on the front, right, but they're tiny right now). All the rest is either weeds or that green manure that seem to be the only succesfull one from all those I have sown.

What can I do, to make this spot a better one for the plants I want to have in it ? I plan at some point to chop the green manure that's here and use it as mulch; is there anything else I should do, either right now or in the future ? I already have a few nasturtium growing in pots, which I'll transplant in a while. Also, I don't have access to a lot of compost or manure, especially right now as most shops are closed, and I don't have a car to transport even small quantities of organic material. I also want to add that in a few weeks I'll have some dried mustard stems available, right now I'm planning to compost them but maybe they could provide the mulch. I have a bit of manure left, should it goes there too ?

Thanks in advance.
show more
1 month ago
hugelkultur