Should I cut down an old tree or try to keep gardening as the shade creeps in more and more each yea
Thank you Teresa Risvold and Joylynn Hardesty.  I had no idea what coppacing and pollarding where, and now I do, so thanks.  I think this is a great solution, not only does it appease your guilt over cutting down a tree, gives you much needed sun light, but I seem to think willow is one of those trees that is almost impossible to get rid of any way.  Several years ago I removed a crape myrtle.  I dug it up roots and all Hahahaha.  For many years I did my best to kill the shoots that sprout up everywhere.  Back then I didn't know any better and even used round-up, and even that didn't do the trick.  Now I just cut it as close to the ground as I can and call it good.  I'm not 100% sure, but it seems to me willows will act the same.
I know how you feel. I hate to cut down trees.  My son has no such problem, and we have heated discussions on it occasionally.  He cut the old Walnut tree behind my garden when I was at work about 3 or 4 years ago.  I was so mad!  He didn't understand why I was mad, we have more walnut tree's, and that one was mostly dead anyway.  Now instead of a sickly English walnut behind my garden I have a robust black walnut creating a lot of shad in my garden as well.  (you all probably know, but just incase English walnut are graphed onto black walnut because it has a better root stalk.)  It wouldn't surprise me if my son cut it down again, but if he doesn't (probably to avoid the world needs trees lecture)  I will have to give this tree a major hair cut.  You got to do what you got to do.  Good luck to you.  Let there be light.
show more
3 days ago
gardening for beginners 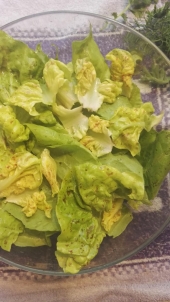 what lettuce do you plant, and why?
Last year I planted 4 kinds of loose leaf.  3 were so bitter no one would eat it but the chickens.  1 was ok, but still bitter. I live in N. California zone 9b. Now is the time to grow heat sensitive crops, like peas, broccoli, spinach, lettuce, etc..  I want to plant lettuce again this fall, I will water more in hopes that will help.  I was thinking that different lettuces has different flavors. I thought I would ask my permies friends what kind of lettuce do you enjoy growing and eating?  Thanks, happy gardening.
show more
3 days ago
organic
How do you keep track of your plants?
I keep a garden binder.  I guess it depends on who you are. I enjoy adding to and looking over my garden binder, especially when I can't be in the garden.  I think it's very helpful.  I planted 4 kinds of lettuce.  Only one was eatable and it grew and grew.  Now I can plant that one and try new ones avoiding the lettuce we didn't like.  I use graph paper and draw my garden, and other places I plant.  It isn't perfect, but it's good enough.  One thing I know about myself is I'm not going to remember.  I love variety, so the only way I'm going to keep adding new things is to know what is already there.  I like to ring my trees with wood chips (not touching the tree of course)  You could put a big rock in the wood chips and write with a permanent marker or paint on it.  It wont last for ever, but I wouldn't think it would need to be touched up more then once a year or so.  Good luck.
show more
1 week ago
fruit trees 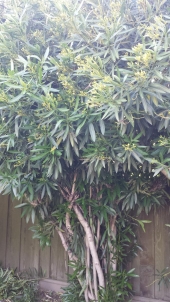 need help identifying tree for hugelkultur- Oleander
Sam I didn't answer your post when I first noticed it hoping someone more knowledgeable would answer you. At this point I hate to leave you hanging, so I will give it my best shot.  I am so sorry you are having this problem!  It is so much work to build a hugelkultur, I hate the thought of having to rip it apart and start over.  The good news is even though every part of the plant is poisonous it doesn't make the soil toxic.  It is still safe to eat fruits and veggies grown in your hugel, just make sure you wash it first.  It doesn't sound like oleander root that easy, you have just some how created the right conditions. As far as I can see you have three main options.  1. Take the hugel apart, and rebuilt minus oleander.  2. Let the oleander grow and ether keep cutting it off at ground level, or pull it out. (I personally don't know how persistent it is.  I have a crap myrtle I removed roots and all ha ha to expand my rose garden.  I have been battling that for years. Before I stopped using round-up I even put that on it several time, I still have to cut, pull, and dig that stupid crape myrtle all summer long.)  3. Do nothing and hope you get a heavy frost that kills the oleander before it grows into something.  I am lazy and always have more to do than time, so for me I would wait and see what happens. If the oleander grows in to little saplings, I would try to pull it out, and if that didn't work, I would cut it at ground level.  I read if you keep cutting the saplings eventually the root looses vigor and dies.  I'm so sorry there is really no good answer.  I still hope someone with first hand knowledge will answer this post for you.  Good luck to you Sam.  Keep us posted and let us know what you decide to do and how it works out for you.
show more
3 weeks ago
hugelkultur