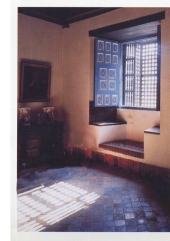 You are not alone: quite a few buildings have been built with jumbo bales. All the ones I know of are industrial; wineries being the most popular, because temperature control is critical there.

There are several things that make the use of jumbo bales appealing to me for houses, the foremost being:
1. The super wide wall spreads the load on the arch such that we can dispense with concrete under them, a BIG element of a building's carbon footprint as we trim that elsewhere.
2. The extremely conservative height to width ratio makes the structural stability of the building easy to attain, as long as you strap the two or three courses together
3. As a designer,  I'm really intrigued with moving from window recesses to window ALCOVES.  Picture your desk or bed IN the window.
show more
1 year ago
straw bale house
Straw bale storage buildings?
It is true, as posters have noted, that buildings without the frequent presence of people long term are especially attractive to the wildlife. But as we all know, buildings often get adapted to uses not anticipated originally, so having an insulated outbuilding could well prove a blessing for you later on. Just be very attentive in sealing up all the exposed surfaces of the bale walls, especially where they meet other materials.

And on the same concern, I would avoid using you neighbor's hay.  Hay has seen heads, and that's food, and that would make the bale walls much more enticing.
show more
1 year ago
straw bale house
trimming bales and bale needles
Hi Greg,

As Jim indicated, the bales-on-end between-studs approach is new and still developing. In a recent Arkin /Tit job,  David let me try out a new approach to holding the bales against the stud and plywood wall: we nailed wire staples to the interior face of the studs, then looped 1/2" cargo strapping through the staples and cinched off the loops with those metal clamps.  When the bales were installed the free ends of opposing straps  were overlapped, pulled tight across the face of the bale with a strapping tensioner and cinched off with a clamp.

This worked really well, and is probably cheaper than using lots of those looong timber screws, but the driving reason I wanted to try it is that I'm  bothered by the interior plaster having to cover alternating plywood and bale surface. Yes,  the plywood washers get lathed, but it just  doesn't feel right. Too close to boxing in the bales.

Final note: to make as many as possible  of the spaces between studs bale width ( and avoid that bale ripping Jim mentioned ) have the carpenters NOT install Jack,  Queen and cripple studs. Instead, use single trimmer studs around doors and windows and fasten sills and headers to them with clips.
show more
1 year ago
straw bale house

Retrofitting Straw bales For Interior Insulation?
MIles, I salute your urban homesteading instincts. But be aware, a brick exterior, whether veneer or load bearing, is NOT waterproof. You have to design for water on the interior face of an exterior brick wall, because it does end up there.  The folks at buildingscience.com have extensive experience with energy retrofits of masonry buildings, and they know their building science, so they will have solid,  tested recommendations for safe ways to add insulation to a brick building.  Best of luck.
show more
1 year ago
straw bale house
Bale Smell
First, I echo what Catherine Wanek said: your moisture levels listed are within safe levels, so your straw is not likely to be moldering.

Second, smelling the straw means air from inside the wall is getting to your nose,  which means there are openings somewhere in the plaster.  The most likely culprits for air leakage are the open joints where the walls meet the ceiling and floor, and around where windows and doors meet the interior plaster. Spend some time sealing those up and see it it does the trick.
show more
1 year ago
straw bale house

Which will keep a house the coolest? Straw bale, cob or rammed earth?
Mass walls ( adobe and cob ) have traditionally worked well in the Southwest because the temperatures in desert regions typically swing above and below our comfort zone, so a well designed mass wall will even out the swings with its stored heat and coolth. When the daily temperatures don't average out to one we like, whether too hot or too cold, then a mass wall is no longer your friend.  Since most climates have seasons where the average temperature is above or below what's comfortable, you are better off insulating your walls than depending on the thermal flywheel for comfort.
show more
1 year ago
natural building
Thoughts on true R-value of straw bale?
I'll add two additional points to this conversation:
1.My understanding is that above the level of R-30 insulation, in most US climates, increasing the amount of insulation has increasingly diminishing returns. You have slowed the heat flow down so much that further slowing is not especially important.  In walls, that is;  Roofs,  because of their solar exposure and interior heat rising, can still profit from higher insulation levels.
2. Studies of thermal mass in passive solar buildings decades ago showed that on a daily basis, only the outer 2 inches of mass walls participated in the thermal flywheel effect we talk so much about. So installing  an extra thick plaster was as effective as putting in a mass wall., and usually less expensive.
show more
1 year ago
straw bale house
Straw bale for humidity control
This question,  " Is it just too damp where I live for straw bale? "  is a hard one, because it depends on so many other factors.  Bad news first: even though straw is made of the same basic ingredients as wood  - lignin, metalignin and cellulose - the far great surface area of bales means that if the 20% relative humidity conditions that allow cellulose eating molds to grow is reached, bales will grow mold quicker than wood.
The good news is that I have yet to hear, in 27 years involvement in bale circles, of a bale house whose straw  was compromised by ambient moisture, including in the North Wet. But in a climate as radically damp as Nicole describes, it would be wise to have means of reducing the humidity of the air inside the house. Otherwise, any time the surface of your floors and walls reaches the dew point, they will accumulate moisture.  Rather than rely on freestanding dehumidifiers, I would look into a whole house ventilation system with a heat exchanger and dehumidifier built in.
show more
1 year ago
straw bale house
Steel exterior siding/rainscreen on strawbale?
Dillon, There are people who have spent a lot of time learning how to build with prefabricated wall panels. The one who writes about it is Chris Magwood, who heads the Endeavor Building School  in Ontario. Check out what he has to say.
show more
1 year ago
straw bale house