rebuilding my etsy shop during the "new normal"
Saw your post about dropping money on Google Ads and the return. I dabble in e-commerce and do  a bit of marketing for various projects, and I’ve found (much cheaper) success with many of the lesser, yet more focused advertising networks.
Some specific ideas for you:

These two are significantly cheaper than Google and I get great results of the ad is written just right. The targeting on these two networks is solid.
show more
3 weeks ago
cottage industry 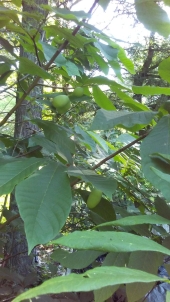 Pics from Greg's Forest Garden
This is incredibly inspiring. You have so much going on for such a Northern Climate - it gives me hope for the future.

Your pink-flowered raspberry looks like a thimbleberry. We get those growing wild around here on the West Coast and they're one of my favourite fresh fruits.
show more
1 month ago
forest garden
Simple drainage for wet lawn?
I'm no expert, but I have the same issue, living on extremely heavy soil with a high water table. The yard slopes slightly, and there's an old overgrown "ditch" running down the lowest point, 20' before the gravel platform of the house (which drains nicely).

I've experimented with two different ideas over the past 2 years and I'll outline the experiences below.

1. I cut a 9-12" ditch (about 6-8" wide) running down one side of the hill, slightly on contour, but mostly along the edge of the "wild island" (which is an overgrown patch with old-growth stumps and such, which we kept for the wildlife habitat) as it was more convenient. This helped with drainage along the one side. Ideally, I would have cut a ditch on contour, feeding into the first ditch which runs down the hill. I didn't want to cut the ditch on contour, because this would cut the usable/cleared part of the side yard in half. I support in retrospect I should have added a french drain style ditch so as to not interrupt the usage too much. The main problem with this would be the grass. Grass roots would likely fill the french drain within a year and I'd have to be actively maintaining this ditch. I guess it might be worth it though...

TL;DR: Dig some shallow ditches as on-contour as possible.


2. When removing patches of sedge, and buried trash that the previous tenants buried/left in the yard, I was left with some holes. Some deeper than others. I patched these holes using pebbles and gravel from the beach across the street. A few of these holes happened to be near a low/wet spot in the yard, and once they were filled with gravel, the areas are no longer soggy after the rain!

TL;DR: Dig a pit in the wet spots and fill with gravel/sand/pebbles to enhance the drainage into the soil below.


As I'm writing this out, I'm realizing a combination of the two would suffice. I'm inspired to go work on this now...

show more
1 month ago
lawn
anybody eat nasturtium?
A local "café" up here had made fermented nasturtium seed hot-sauce. Sort of like a salsa verde style. It went very well with their sourdough take on an eggs benedict!
show more
1 month ago
wild harvesting
Canadian sources for bulk gluten free flour?
We order a lot of our bulk goods from Organic Matters, out of Nelson BC. They’ve been great, but due to the recent pandemic they’ve been off-and-on.

Another vote for Abundant Edge Podcast, and Cannabis Cultivation Podcast. Okay, okay, before you call me out on the second one — they cover much more than just cannabis cultivation; there are episodes on natural farming, permaculture, organic mulch, soil building, etc.

Some of my favourite podcasts these days are audio drama / fiction. Supernatural and weird and mysterious: Tanis, Rabbits, Black Tapes, The Bug Loop, Limetown, Deca Tapes.

Radio Rental for weird stories about people’s fears (featuring Dwight from The Office), Thunder Bay for investigative reports on the corruption in Thunder Bay, Ontario (well written and well-produced), Someone Knows Something for well-produced and heartfelt and mysterious true crime cases.
show more
1 month ago
web sites

Wheaton Lab Logo--does this look decent?
I like the concept, but I would simplify it a bit so it can be applied to more scenarios and mediums.

But I guess this won’t help if these phone doesn’t have a SIM card.
show more
3 months ago
meaningless drivel