Building soil for Nutrient Dense Foods
Thank you for the detailed reply, made me want to go back to school.

Before I even got home from work to read your reply I realized how clearly right you are just based on my experience growing up near the ocean. I lived on peninsula 5 houses in from the beach. At least every couple of years a bad storm would come through and the whole town would be waist deep in ocean water. That town was where I had my first garden and my parents never used fertilizer but we always had amazing yields. The only thing we did was rotated the crops and use our own compost. I never knew that we were benefiting from said floods.

Speaking of salts other than NACL what is your opinion on Magnesium Sulfate? I used to just apply it as a spray foliage booster but some are saying to use it for germination and soil amendments?

Now I know of the research, I will test it out this season in a small area and might be amazed, I have faith in science. It sounds crazy because highway crews can't use salt on the roads if there are any farms nearby, they can only use sand during snow storms. I was told salt never washes away it just accumulates. I also heard that after certain wars enemies would salt each others farmlands so that nothing would grow. Both instances are probably thousands of times the concentration of just using a little sea water. Wish I didn't move an hour away from the ocean now, would have been a lot easier to test this.

Are there not companies now adding things that would help provide these minerals, like seaweed, kelp, spirulina, chlorella? If I grow one season of food crops and also my wife's rows of flowers and we manage to establish these missing minerals will they now be found in next years compost? Last question, wasn't the entire earth under sea water at one point? Where did all those extra minerals go? All serious comments and questions, there is nothing I like more than healthier plants especially food crops.

Edit: I am a scatterbrain, so I can just make my own using real sea salt? Like Redmond or a quality brand of Himalayan? I use both in my veggie ferments. I was told to avoid evaporated ones because lead is showing up in some batches but that could be false rumors. I do have plenty of Redmond and Himalayan though.
show more
1 year ago
books
Off Grid Solar
study electrical theory or get someone you trust that has and I don't mean trust money wise, I mean trust mathematically. Don't be afraid to start small either. Collecting energy is one thing, whether solar, wind, water, manual horsepower etc, but sustaining it, storing it and transferring it to what is needed and when it is needed can vary greatly in difficulty depending on your needs. If I just need my green house a few degrees warmer for an early start and a late finish on a green house I don't even need to store or convert power but if I need to power a single wide trailer with house hold ammenities I need to store and convert at probably a higher cost than the form of collection i.e. solar panel.
show more
1 year ago
solar 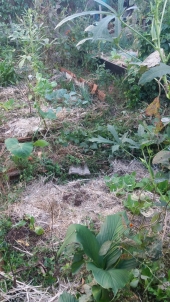 Why did you start a garden?
Started gardening as one of my chores as a kid so I never gave it much thought.

Years later I went at it with more gusto because of the variety. Instead of having 3 types of tomato to choose from I had dozens of varieties. How about peppers, Jalapeno and Habanero weren't hot enough, fine I'll grow Trinidad Scorpions and Carolina Reapers. A recipe calls for fresh herbs, I'd rather step out the back door than hop in the truck and drive for something half as fresh.

Then it hit me, the best part of growing your own food is the feeling of peace and being one with nature. I've helped myself and a lot of people relieve stress just by showing them how to start a small garden, even if it's just a few plants.
show more
1 year ago
gardening for beginners
Building soil for Nutrient Dense Foods
Diversify your crops and rotate your crops. What you don't eat, till back into the soil.

If it's just us and neighbors to trade with growing a wide range of crops and flowers that are rotated or at least rotated via what they produce in compost for our soil we will sustain.

Soil truly is the most important part, without it the bee's have no flowers, our crops would have no girth and yield and the livestock would have no true grasses to graze. I feel bad when I see beginners mistake "dirt" for soil but it's hard if you don't know. Here the box store are allowed to sell bags labeled "top soil" when it's really just construction debris. You'll find more broken glass than you will nutrients.

As for sea water or salt, it's great for sauerkraut and ferments but plants in vegetive state don't particularly like salt. Seaweeds, kelps, sure but sea water?? News to us, I'd save that for the ferments.
show more
1 year ago
books