How to transform a heavy clay steep slope into a fruit orchard/ food forrest? Any advice welcome!
Welcome!
I am myself a beginner, but the method I've heard for improving clay soil is to either dig and amend it yourself with a lot of compost then plant something what will fill the pore space you made by digging with roots before it compacts again. Or, the slower, easier way is to grow couple years of cover crops that have strong roots which will do the digging.
A mix of cover crops that symbiotically feed each other and fix a soil problem is the area of horticulture I've been researching. Its a lot of work to find the right mix for your area and purpose, but there are amazing results when a person gets it right.
show more
2 days ago
tips for awkward spots
Teaching a bull to be ridden
I've only seen it done by kids in 4H who raised their critter more as a pet, spending lots of time as it grew up. Does your bull let you halter it and lead it around?
show more
1 week ago
cattle

The best mileage possible is from small displacement commuter cars from Honda, Toyota, and VW. The diesel VW's are generally the king. But then you get into whats available in your area, what you can afford, how you drive, and if you want to get into car modifications to make it a personal contest. Lots of other cars make it onto the top if you get into aerodynamics and weight mods.

Personally, my family has had some great unmodified high MPG VW cars, Rabbit, Jetta, and New Beetle. But they all broke down after a while. If you are factoring in vehicle lifespan, light trucks really challenge one's assumptions about the value of high MPG. The more work side of my families fleet has been Dodge Ram 2500 and Chevy Suburban 1500 rigs that are still going, they get 10-15 mpg but will probably last two or three times longer than the 30-50mpg VW's.
show more
4 weeks ago
transportation

Ideas for creatively transporting round bales
As F Agricola suggests, some kind of sled sounds good to me. You could put together a temporary one with scrap lumber.
I've been around a lot of round bales, but mostly with tractors. If there's any way to beg or borrow one, that's the way to go. One thing I saw, when delivering round bales to someone without much equipment, was a large spike that could be hammered into the bale so that a chain and vehicle could pull it off a trailer. They also had a giant hook that could be spiked into the bale to roll it.
If you have a long enough arrangement of chains, cables, comealongs, and any trees, maybe some pulleys or snatch blocks to make it easier, I can imagine someone moving a round bale pretty far by hand. Not sure if its easier than breaking it apart though.
show more
1 month ago
mulch

Router Sawmill
William, your idea sounds like the arrangement of a milling machine used for metal. There's definitely a place for a fixed robust motor and cutter that the material is moved against. I'm not able to imagine a way it would be useful for log sized wood through, for all the reasons others have mentioned. For another, a machine that could do that sort of a cut successfully would be so large the power requirements would outclass all the other ways one could cut wood.
show more
1 month ago
woodworking

Fork lift dirt totes
They are not UV stable! At least none that I've seen. Too much sun and they flake and tear. They will last for years setting outside, say full of aluminum cans beside my shed, but they won't support a load. Full of something light like cans, I'd say 6 months outside will be ok. Anything heavy like grain or rock, maybe a month, but for me the limit is one day if I'm doing a big sack shuffle. I've resacked so many of those by hand after the straps broke. So you you are going to repurpose them for anything, make sure the sun can't get them.

Sack plastic might eventually biodegrade, but its probably one of those that takes 90 years.
show more
1 month ago
upcycling
Where is the best place to get soil tests done?
The best place is the same place as last time. If you are going for measurements over time. Labs can have slightly different procedures that can throw off comparisons a bit, but any good lab will be dedicated to their own procedures being consistent.

Standard soil tests are a good measuring stick, but there can be a lot they don't show once you get into soil biology crop interactions. There's other tests for that, and sap analysis. I'd pick whatever soil test lab is nearby.
show more
1 month ago
soil 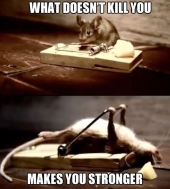 controls for mice, ideas brainstorm
Those rolling log bucket traps seem to be the all around best for catching a large amount of rodents. But I've been using snap traps for years and it takes a lot of trying to find the right bait that will tempt a specific group of rodents, especially ones that are aware that the trap is a danger. For a while cheese crackers worked every day for me. Some mice love peanut butter, others ignore it, especially if it gets old and dry. Lately I got a bunch of frosting packets that I sure wasn't going to eat, and the mice love them. If you have something that isn't a mouse, like baby packrats, they learn faster and are too tough for mouse traps. I mainly catch rats with a catch-em-alive wire box trap. The trick to live traps is to wash them well between uses to get rid of the fear smell. I've had rats avoid a treat filled unwashed trap.
show more
1 month ago
nibblers
Went to a big ag farm conference and found...
So I went to a big ag farm conference, and was surprised to find much of the talk was about regenerative agriculture!

I typed up the notes I took and they are about 7 pages so instead of posting them here, I'll just give a summary. If interested, you can read the entirety of what I learned here:
https://gradyhouger.blogspot.com/2020/01/direct-seed-conference-notes.html

The big thing was that farmers in my bioregion, with similar financial situations, have found ways to successfully use cover crops, multi species cash crops and compost tea in commercial grain production. I can now talk about new farm methods tried by "the farmer down the road" instead of "something I read on the internet". It moves the needle from "I don't know if that could work here" to "it might be worth a try".

A new method surprised me, and it worked well for two low rainfall farmers already; planting a cash crop, with a mix of cover crops in the spring, graze it in the summer, the cover crops are all ones that die in winter, and the cash crop takes off the next year for a grain harvest. Being able to keep a living root in the ground and avoid a fallow season will be a great benefit.

One guy told of his good results using mycorhyzal fungi inoculent on his seed wheat instead of the usual fungicide seed coating. These no-till farmers still use a lot of herbicides and synthetic fertilizers, but they are excited about using less.

Also at the conference was a session about work being done to make "regenerative ag" a certification like USDA Organic. I don't know how that's going to turn out once the marketing types get a hold of it. No one talked about organic certification as a farm method or marketing strategy, so it seems like there is a shelf life to such ventures. Organic seems to be its own separate bubble in the industry.
A carbon credits spokesperson talked about their startup working to connect farmers who can prove they are sequestering carbon with well, mainly fossil fuel users seeking to buy forgiveness. It sounds like a scam, but I guess we'll let the market decide.

Of the 19 sessions, only 3 were about pesticide topics. At other ag conferences I've been to its the opposite ratio, almost all about chemicals and a couple sessions about soil health and biology. There were several companies in the exhibitors hall selling natural and organic crop nutrition products. So the tide is turning, chem ag is getting competition from nature focused methods. Nearly every speaker said something like "we have to rebuild the soil, and biology is the only way to do it."

One last thing, there were no agricultural robots. Maybe next time.

Bulk cleaning and especially rust removal from bolts, screws, and other small hardware
Its a treat to find a properly oiled old bolt, or even a crusty greasy one, and find its as good as new. Counters out the disappointment of finding a rusty bent bolt in the "good bolts" bin.
show more
1 month ago
repair