Merit Badge info
We're transitioning to a wooded Tennessee property (currently living in a Nashville apartment). We have a son (born in 1997, now out in the world) and a dog (standard poodle, SO not a rural animal). We're interested in food forests, chickens, goats, and, well, everything (we're total newbies to permaculture).
Charlotte, Tennessee
theronway.wordpress.com
Apples and Likes
Apples
Total received
43
In last 30 days
0
Total given
32
Likes
Total received
171
Received in last 30 days
1
Total given
293
Given in last 30 days
8
Forums and Threads
Scavenger Hunt

undoing a notification block
Great, thank you - and done! :-)
show more
1 week ago
tinkering with this site

undoing a notification block
Hi there!

I accidentally clicked the wrong email link. I got a notification of new post in a thread I'm following. I must have clicked on the option to not see those notification anymore, but I will truly miss them. Can I re-up somehow? Thanks!
show more
1 week ago
tinkering with this site

*Welcome Dre Oeschger of Truly Garden and Loma Creek! Updated w/ Coupon!
Great to have you. What a nice offering of tools!
show more
1 month ago
gear

Name. That. HOMESTEAD!!!
Our property was my mom's. Her name was Theron Caldwell Ris. She and my dad purchased it in 1970, and she got it in the divorce settlement four years later. Although she lived in Wisconsin, and the land is in Tennessee, she hung on to it. And added more acreage! My mom was stubborn and tenacious. So we've named the property in her honor: Theron Way.

We're also slowly naming areas of the land - just makes it easier to talk about! I'm trying to find out its history so that we can include reference to some of its historic owners. I spoke last week with the cousin of the family who owned the 40 acres bluff until 1984, when they lost it because of back taxes (not to us - we bought it in 2017). We're naming that area after them.
show more
1 month ago
decision making
NYT Article about the imminent demise of one of the US's oldest family farms
So sad to read this. Maybe someone who's working on their PEP skills will contact the family and move there to help them out! :-)
show more
1 month ago
homestead
Have we just ruined our prosciutto and brined ham in the first 14 hours?
That sounds painful! I hope you've found some good, reassuring info that you haven't lost all that good meat!
show more
1 month ago
charcuterie
Giant Milkweed Wintering
Hi Hannah,

I don't know the answer to your question, unfortunately. I did do some googling, and maybe this is helpful?
8 Tips for Overwintering Tropical Plants

Maybe someone else will chime in with actual real life experience. 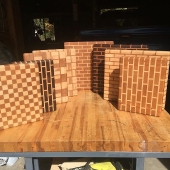 Do you sell things that could be Christmas Presents?

I know about that ship and the song as well.

I often show a picture of me holding up a HUGE lobster on here, but what people do not know is, on that trip, several hundred miles away, 4 of my friends were fishing when their scallop net hit ledge on the bottom, and ripped their boat apart. All four of my friends died. Only the EPIRB was found...


Travis, I am so sorry for your, and their loss. Life is a precious, fleeting thing.
show more
1 month ago
gear

Travis Johnson wrote:If it was me, I would use some lumber and make a frame to hold a bigger container, say a 2-1/2 gallon bottle of water with a bigger spout. I would have the frame pivot on its own axis, but have it returned to the upright position via springs. This would put the water dumping in the same spot every time and not bouncing around on a rope that changes from the different weights of the jug depending how much water is in it.

Down below I would put a funnel with a catch jug so that the water is not just wasted on the ground, but rather used to water plants, or other uses beyond personal hygiene.

Obviously I do not know what you have for resources, but I could build this all with scrap lumber and jugs I have kicking around, and not have to spend a penny on it. Time wide, I could have it built in a day as well, so it is not a big project. In the end your Tippy-Tap would save even more amounts of water because it is not splashing on your feet, or in the woods.

I'm not exactly sure I can visualize what you mean, Travis, but it sounds good. This idea could be especially appropriate for our second campsite, which is less accessible and doesn't have any water source nearby.
show more
2 months ago
plumbing

Phil Stevens wrote:You could use a pulley secured below the jug which allows the pedal to be placed out of harm's way.

I'm having a hard time visualizing this.


Jan White wrote:Looking at other tippy tap examples online, it seems like playing around with the length of the rope and placement of the stick will keep water from pouring directly on your feet. If it's just splashing, maybe putting the recommended gravel underneath would help.

This is probably the approach I need. Maybe a different water storage too. This jug is the second, and is an improvement - I put the drip hole as far right as I could, and I made sure not to put the second "breathing" hole to far forward.
show more
2 months ago
plumbing