Ordered my new ebike
My commute sounds very similar to yours.  This really does sound like a fun way to travel in nice weather.  Have fun!
show more
2 days ago
transportation

Outdoor rocket burn water boiler using 50-60% less wood: heating entire house, outbuildings & water
Note that the company has chosen to use a simple vortex instead of a "Double Rams horn" vortex in its afterburner flow.

Aureon Energy LTD.
Dan,
You will find in earlier news that Aureon had concluded it's "SAFE" round of investment fundraising"
Per their claims, they attracted far more financial support than expected.  I was hoping to get into some sort of small position with them but the requirements stipulated that one had to be a "Qualified Investor", and that was someone who makes hundreds of thousands of dollars a year and has enough cash reserves that they would not likely be hurt if the venture were to fail.  Sadly, I do not qualify as such.

I expect at some point the technology to be leased to the companies that own your local power generating station as at its core, it is really just another means to boil water and make steam for driving a turbine.

Maybe somewhere down the road we can at least get some common stock.
show more
2 weeks ago
alternative energy

Aureon Energy LTD.
Well, Gosh!  It's been 8 long months now and it looks like Aureon Energy Ltd. is still in operation.  No arrests to make note of.  Ian?
Are you sure you know what you are talking about?  I think maybe you are confused.
show more
2 weeks ago
alternative energy

alternatives to cob?
I have been buying solid cement blocks that are small enough for me to carry down a flight of steps to the basement where my build will be going on.  I'll use these only for the pedestal the burn chamber will go on and for the bench.  Not sure about today's prices, but last year I could get these at about $70 per ton.
show more
2 weeks ago
rocket mass heaters

Would you please elaborate some on the materials you are using and its characteristics?  Much appreciated.  Thank you.
show more
3 weeks ago
rocket mass heaters
Automatic Whole House Fan?
I have a whole house fan in my home.  I hate it.  It is obnoxiously noisy.  It even sucks the scent of woodsmoke and creosote down my chimney and into the living space.

Now, I can see your attraction to the idea of an automated system that will purge your house every so often.  My fan has louvers as part of its housing.  They open up as soon as I turn the fan on as they are right next to the pressure differential created by the spinning blades.  I have my doubts as to how that would work if you relocated the louvers to a more remote position.  Louvers that were specially created to be finely balanced would probably work.  The use of a temperature controller and a contactor or relay is pretty straight forward business.

Good luck on your project!
show more
3 weeks ago
conservation
Rocket mass heater in basement with firebox feed above?
If you are considering using a long tube to feed your basement fire from the floor above you risk the very real potential of having the fire creep up the feed tube and reverse the flow of the heater.  Dumping smoke and flames into the upstairs living space.  I would not advise it.
show more
3 weeks ago
rocket mass heaters

Take the blade off a sawzall, plug it into the electrical outlet, press the head onto what ever you want to vibrate, pull the trigger.
show more
1 month ago
rocket mass heaters 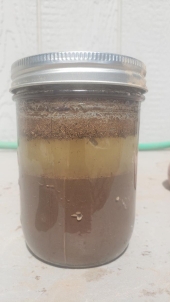 Please help me rate my jar dirt test!
My first soil test was very confusing.  It looked like yours.  Some organic material floating on the top, then water, then clay.  I have nothing but clay under a couple of inches of topsoil under my sod.  Clay that goes on forever.
show more
1 month ago
earth bag