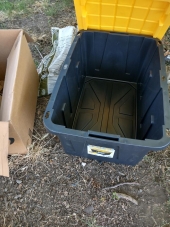 increasing wine cap spawn in a plastic bin?
Nice job Jen.  You are on top of things better this summer than I am.  And you are right that this about the worst time of the year to get Wine Caps to grow but you are doing all the right things, especially by keeping that container in a shady place.

Maybe think about the lid.  Fungi need oxygen to grow so make sure they can breathe.  Maybe attach loosely?  At any rate, it looks great.  Thanks for the pictures.

What are your garden plans for 2022?
Fencing!

I need to do something different about my fencing needs.

I have always had deer, but the better my garden soil has gotten, the more attractive it’s veggies have become to deer.  I used to be able to grow a garden with no fence at all—NO MORE!

A couple of years ago I built a set of gates that rested on the edge of one of my raised garden beds.  It was nice in that I could lift out any 8’ section to get access to the bed itself.  It was a lot of work and more money than I wanted to spend (about $100 for 1 bed!  All the fasteners drove up the cost and I didn’t realize this till I was well into the project).

With that in mind I made a quick, cheap fence out of chicken wire and cheap T-posts.  It works fine but I have to straddle a 4’ fence to get in, which I can do but it takes a toll on the fence.

I am at the point where I am going to put a fence around both beds and leave space for me to work and of course a gate.  I probably won’t get this done till fall though. 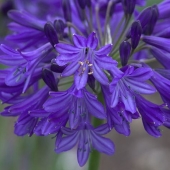 Need help with drought resistant perennials that deer love?
Anne, this might be a stretch, but is there a possibility that you could grow bluestem grass?  It comes in two broad varieties—Big Bluestem (6’-8’ tall) and Little Bluestem (3’ tall).  Both are highly tolerant of a wide variety of conditions, but Little Bluestem is especially noted for its drought resistance.  It is also a very nutritious grass that deer generally love.

Big and Little Bluestem grass used to make up much of the Midwest before it was turned to corn-and-bean county.  Bluestem grassland largely fed Bison.  Maybe this could work for you along your dry creek area.

Eric
show more
3 days ago
greening the desert
Water Saving Faucet
Bob, I think that is a really great idea!  You are looking at some type of high pressure, low volume spray, correct?  I am not exactly certain how to incorporate hardware Kim that into a kitchen but I assume that you want something that sprays a higher pressure and a lower volume than a typical sink hose.  I suppose for starters you could just modify something like the pressure sprayer you already have to fit more conveniently on your limited kitchen space. 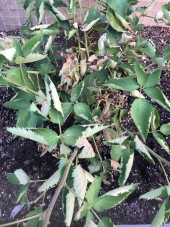 Blackberries - what's wrong with them?
Emily,

It is weird that you have vibrant, dark, healthy green leaves on shoots right next to shoots that look like they are about to die from drought which leads me to think that the problem isn’t about water, especially as you state that you water daily.

This does make me think about the possibility of some type of disease.  If Disease is the issue, my thoughts would be to get rid of as much of the diseased portion of the plant as possible.

But this is just my guess as I have never seen this exact problem before.  If this sounds about right to you, maybe we could brainstorm a way out for you.

composting wood chips with chicken litter and fungi
Thanks for the question Jay!  I am pretty certain that the fungi is just hibernating, kinda sitting in time out.  But I am pretty certain that it also ran out of food in the first place, thus the reason I want to add in the straw—sorta like a quick fungal sugar snack.  But at the moment it is just sitting dormant due to lack of food and water.

Yesterday our drought broke.  Thunderstorms started about 5:00 am and gently continued till about 11:30 am after which the day was generally gray and the temperatures were in the lower 70s.  It was a perfect day for getting moisture to my rain-starved garden bed.

I checked on the bed this morning at about 10:30 am with the temperatures again in the 70s and the skies bright and sunny—perfect for growing!  I checked specifically on my cucumbers and they look like they have had a little growth burst but are just a touch light green and look like they could use some nitrogen.

I had been adding some vitamin “P” into a Kitty litter container yesterday so today I filled with water and took it out to fertilize.  As I was pouring on the fertilizer I was a bit surprised by how fast the liquid ran through the chips.  The chips were much, much wetter than two days ago to be certain but we’re still not soaked to the point that they really want to readily accept more water.  I clearly need to water some more.  It is on the road to recovery, but it has a ways to go.

As far as getting Wine Caps re-established, if things work out I might try to get some new spawn this Fall and add it to the bed under some straw and see if I can get a fairly quick crop of mushrooms growing in some straw placed on top of the chips, hopefully reconstituting the bed again.

Eric
show more
5 days ago
composting
When does drought begin?
I may have sounded the drought alarm a little early.  This morning at around 5:00am we got a good thunderstorm that rolled through.  Since that time (11:30 am as I write) we have had a long, slow, gentle rain—perfect for getting moisture back into the ground.  So technically we did not hit the drought indicator I like to use (3 weeks) but we did have a fairly dry spring, my wood chips had turned to dust, and I watered for the first time in 10 years yesterday.  It remains to be seen how the summer progresses, but for the moment at least, our dry spell is definitely over.

But hot, dry weather is in the forecast and my cucumbers are still in recovery so we will see how things go.

I last reported on this bed left fallow from the previous year back in early May.  Leaving a garage bed deliberately go fallow may be a mistake as I am finding now.  One effect of letting the bed go fallow was an abundance of weeds so I am having to work around those this year to a degree that I have not done in some time.  Some of the weeds—grasses mostly—I can pull easily enough.  Others seem to spring eternally and have little thorns—Ouch!  I certainly don’t have every weed, but between smothering, pulling, cutting (with hedge cutters!) and low moisture, most of the weeds are under control.

Now regarding the condition of the actual mushroom/fungus/compost part of the bed, I wish things were better.  We are in the beginnings of a drought and I just got done watering this morning—the first time irrigating in 10 years!  The compost is pretty dried up right now so it will take some time to get it moist to the point that it readily accept water—almost like a dry sponge.  I will probably be doing twice-daily watering for the next few days just to get the moisture levels back up to acceptable levels.

In terms of crops, things are pretty simple this year.  I am only growing yellow neck squash, cucumbers (which only just went in) and tomatoes.  The tomatoes, sadly, are replants as the first were eaten down by deer before I could get a fence up.  The tomatoes have struggled a little bit in the high heat and drought but should pull through.  The cucumbers are the very last to go out and sadly got planted in the driest of conditions and wilted before getting a good watering and springing back.  The squash does not care about heat or drought and maybe even seems to like it.

Under the squash leaves where some degree of moisture remains thanks to abundant shade, I have seen some occasional fungal fuzz.  It will be interesting to see what comes of this fuzz, if anything.

So the short of it is that while the bed is finally up and planted it is extremely hot and dry.  This year will be a good test to see how well the bed does during drought conditions.

Eric
show more
1 week ago
composting
When does drought begin?
Ok, I think that for practical, gardening purposes I have to say that I am experiencing drought conditions as I need to do something that I haven’t done in about 10 years—irrigate!

This year I only have one bed planted due to some spring chaos.  I am (attempting) growing yellow neck squash, cucumbers and tomatoes.  I got the cucumbers in just last week because I needed to make a trellis first.  I thought I had enough moisture down deep in my woodchips but when I checked yesterday, one cucumber plant was laying flat and wilted.  It has a little bit of brown on the edges of its leaves.  I therefore went out and dumped 2.5 gallons (1 cat litter container) on those two cucumber plants and by this morning they had both perked up with one even grasping the trellis and the wilted one at least trying to stand.

My tomatoes did not look so great either.  They were definitely dry and clearly not growing as fast as they should.  This morning I went out and bought a hose so I could actually water thoroughly in the mornings and at the store it looked like pretty much everyone was buying hoses, sprinklers, water wands, etc.

This will definitely be a challenging year for my mushroom beds (no mushrooms growing this year) as my mushroom compost has never been so dry.  In the past it has acted much like a sponge—absorbing water and holding it for slow release.  This year it acts like a dry sponge—it is so dry that it does not want to accept water that falls on it.

I probably will end up watering on a daily basis now, but this is kinda sad.  In years past my mushroom compost was highly drought resistant but the recent heat and lack of rain has really dried things out.  I even have an irrigation system installed out by my garden but it is buried under one of my mushroom beds!  To use it I would have to dig it out!  I really thought I was past using this but this summer may be the ultimate test.

Last point:  this is the first time growing cucumbers (my wife requested them).  Does anyone have any tips on growing them?  I know they need a trellis and one is in place.  I am certainly open to pointers.