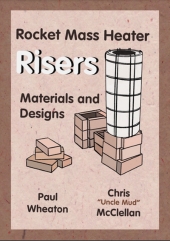 rocket mass heater risers: materials and design eBook
My friends and I were lucky to have pure clay, not a mixture of clay and silt or clay and sand for example. We were happy with result, zero cost J tube.
Basic simple pure clay is good. We used huge amount of wood ash until like in the process of mixing perlite and clay-so when you press it makes this buff.
3 people, several weekends. It was really slow process. With firing it just gets better, no cracks even on ship with constant vibrations. We are lucky with clay and wood ash.  To repeat this experiment from 2018, it is on my todo list, overdue.
This mixture if you have proper clay and ash is free. In area where I live we are lucky with rocks.
show more
1 week ago
digital market

Zoran Jovanovic wrote:Thanks this is excellent! My favorite heat riser is missing though. A friend of my found on Peter van den Berg website about zero costs riser made of ash and clay.
It requires that one have a lot of ash and lots of good will for mixing. Potassium and sodium from ash react with clay to produce Na, K alumo-silicates,  minerals which do the job.

Here it is the link  https://donkey32.proboards.com/thread/233
The link I found on Peter van den Berg forum.

The Life is the most important teacher that we have.
More Important then 1000 books this Earth.
Since the life provides  (yields) us resistance and through it we learn.
Only through fight, finds the Human him himself
(Heini Staudinger Austrian shoe maker)


P.S which reminds me to Sepp Holzer:
"Why you are here? Are you here to suffer or to live and collect experiences, so that you can get grip of things."

rocket mass heater risers: materials and design eBook
Link?
Sorry with all good will I can not find this info on Peter webpage again. We build this in winter 2018.....  Searching for this seems as  looking for needle in hay.  Asking Peter is maybe quicker...

On the other hand I can provide another link though from one French  material scientist giving the lecture on very similar material which can be made by  mixing NaOH and clay or zeolites. The reaction which happens is similar to what is going on when mixing ash and clay... Sorry that the video is 2,5 hours long....

edit  review: this video is very demanding I had tones of notes on it. It seems for me to be following scenario: Poor Professor is defending himself from attacks from industry. One also have to adjust the ear to his way of speaking and accent, but along the way in two hours then he gives good overview of terminology and explains what happens.  There is a slide  in the video, where the rock forming reaction is presented very well. The whole process is very simple. But one has to plow through first for the information.

rocket mass heater risers: materials and design eBook
Thanks this is excellent! My favorite heat riser is missing though. A friend of my found on Peter van den Berg website about zero costs riser made of ash and clay.
It requires that one have a lot of ash and lots of good will for mixing. Potassium and sodium from ash react with clay to produce Na, K alumo-silicates,  minerals which do the job.
show more
2 weeks ago
digital market

all wood (or pure wood) fine woodworking - no glue or metal - advanced joinery
There is an Austrian who is building houses 100 % of wood...

Everything started when his family moved from forest to small city when his son get sick, allergic to glues, used for production of furniture.

He find solution turning to the knowledge of the 90 years old grandfather (who was Zimmerer- old profession which involved not only carpentry but also going cutting wood high in Alps during winter months) .

Grandpa insisted  that the wood is cut in winter months during waning moon.
Later some Swiss professor studied the wood cut in this manner and it turned out that it is drier and has less sugars, and the  gravity of the moon plays its role in it.

The strangest thing is that the monks from the oldest Japanese temple visited him to tell him that what he wrote in the book is the same as they have in the scripts from the times when the temple was build ( I forget the number but I it is more then 3000 years old building).

I asked some old people who live in the mountains in Serbia if I want to build the house, when I should cut the wood for the framework of the house.

They tell me in the winter when moon is in waning  phase. It seems that is the knowledge that was widespread across many cultures.
....
The wood cut in this time seems has difficulty to rot, it is too dry for fungus and the insects really don't like it so it can last very long.
Examples of numerous Alpine buildings more then 500 years old.

The example (from the book) of the bathroom made out 100 % of cherry wood, matches the examples of cob bathroom in my opinion. Although for wooden bathroom you don't even need the linen oil. The best protection is cutting the wood in the right time, during winter months and waning moon phase.
...
Untreated wood doesn't attract a dust...
....
It is pity that there is no single lecture in English from Mr Thoma.  And his books as I can see are not translated in English.
But there is no doubt in my mind that this is really important knowledge.

Permies Movie Night: Aug 19th, 2022
If I could throw one more suggestion for the future movie nights, it is  documentary "The architecture of mud" about the ancient building techniques in Yemen.  I saw it long time on youtube. Not to find it anymore on youtube.

I found it on this site https://www.architel.tv/architecture-of-mud

where is available for free and the web page has a pretty good description of the movie.

The Hadhramaut region in the south east of Yemen is well known for its mud brick architecture. Throughout the centuries, the population has developed very sophisticated building techniques and created a unique architectural environment. Spectacular structures such as ten-story mud brick tower houses rise up from the valley's floor. In interviews throughout the documentary, the masons describe their working techniques and the challenges they face with the introduction of new, imported building materials. The Architecture of Mud documents the vernacular architecture, the building craft and the society they belong to.

Movie: Dersu Uzala (Akira Kurosawa)
I forgot how sad the movie is.

What I really like is the sound and images and Dersu solution how to build shelter very fast.

Permies Movie Night: Aug 19th, 2022
It is not that I have something against watching the videos above. But when I hear movie night I always think about movie Dersu Uzala.

I think it fits well to permies. It is about man who lives alone in the Siberian forests at the beginning of  20th century when he meets bunch of soldiers mapping the area. He lives and travels with them some time.

It is in original Russian with English subtitles. Directed by Akira Kurosawa in 1975.

Here is imdb for more details.

What I really like about the movie, you learn how to make a shelter fast so that you can survive Siberian windy night.  There are examples of other forgotten knowledge, which people used to know, but don't anymore.
show more
5 months ago
meaningless drivel

Ultrabasic soils
Sorry I don't know regarding the caliche, I haven't heard the term before.

I guess ultrabasic dirt have some special micro organisms which are able to live in this dirt and  make ultrabasic soil.