"Recipes" for particular hybrid varieties
What you are describing is segregation in the F2 and it can give you some data on what the grandparents were. Given that you might be able to reverse engineer and figure out approximately what went into the original cross.

The inbred lines used in most hybrids are secrets kept closely by seed companies and not sold. So they are basically secret recipes mainly kept from other seed companies.

An open source F1 anyone could make. Joseph Lofthouse did such a thing a year or two ago with a corn.

You can also dehybridize hybrids which is something Alan Kapuler popularized.
show more
2 months ago
seeds and breeding

Its fun to think about this promiscuous / obligate outcrossing trait now that its in tasty forms in my garden. Next year I may direct seed a row of the now tasty promiscuous lines.

I think that the single plant of fuzzy fruited / other habrochaites cytoplasm line surrounded by lots of tasty promiscuous plants is by far the space efficient method to introduces habrochaites cytoplasm lines into the promiscuous project. Planting large numbers of the hard green fruited sorts of obligate outcrossing tomatoes is getting less exciting now that the tasty sorts have arrived. I have the seeds to do it though if need be or if needed.

It was interesting to me just how much more fruitful the Lofthouse habrochaites cytoplasm line was then the new fuzzy habrochaites cytoplasm line. New Fuzzy Hab really struggled to set fruits with only a few mothers actually bearing despite ~10 fuzzy hab plants and lots of lofthouse strain hab x plants around them, I expect better results from the saved seed, and am curious to see signs of hybridization between the hab lines next year. I have plates full of the seeds that need put into packets.

There was one clump of something Joseph sent that is a three species hybrid. Mostly green fruits but one kinda peach colored. Unsure what the cytoplasm was on that? If its a hab or penellii cytoplasm I need to seperate that peachy fruit.
show more
2 months ago
seeds and breeding

Promiscuous auto-hybridizing tomatoes
This question Joseph posed. I think we can generalize it a little bit. To "have we previously accidentally produced any promiscuous lines".

I've been growing habrochaites tomatoes from Joseph since 2017 alongside exserted domestics. I undoubtedly have newly hybrid embryos amongst my seed stash. No idea what percentage.

In 2019 I grew out a huge F2 growout. Mostly of plants from exserteds I open pollinated. I deliberately daubed habrochaites pollen as well as others onto stigmas of the F1. I included a small portion of known wild hybrids. Percentage wise not great, but I definitely found a few obvious ones in the direct seeded growout. These did not set seed.

There are a few lines that I was uncertain of. However, while these may or may not have had some wild ancestry they produced abundantly. Suggesting that they were selfers.

I direct seeded BH x W4 G2 of wild type parents in 2020. Direct seeding worked great. They were fruitful. I think most say upwards of 90% were obligate outcrossers and the same with the elite lines I transplanted.

So ultimately I think from my experience an accidental promiscuous line seems unlikely. Though possible.

However, I'm curious to see what happens when I isolate a habrochaites plant amongst the promiscuous G4 plants in 2021. Have a furry habrochaites line and a G4 packet with good bicolor. Yep it would be possible to have a furry bicolor. If our promiscuous lines can back cross to a full habrochaites that's convincing proof that everything works. I grew the G2? Of such an experiment with the usual habrochaites lines this year from Joseph but all were wild type so far.
show more
2 months ago
seeds and breeding

I worked for a little while for a guy who was way into older heirlooms. He had us grow a french heirloom with deep ribbing and color change. Story was it was once a important market type. I can't remember the name. It got ripe for me, I saved but have since expended the little seed. I think I got one like it and like the picture in with Joseph's this year.
show more
2 months ago
seeds and breeding 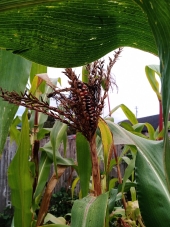 hermaphrodite corn
Lots of hermaphrodite ears in the sweet corn I grew this summer. Often a single tassel sticking out of the tip of an ear.
show more
3 months ago
grains and pseudograins 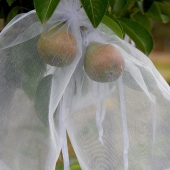 How do you mark plants/individual fruit for saving?
I don't have my mom in my garden much!

I use three kinds of labels, plastic tags cut from yogurt cartons, plastic and wire flags, and little paper price tags that have a string and paper that can be tied on.

I regret the plastic it leads to microplastic in my garden. I use a very permanent garden marker on the plastic.

Wooden tags and wooden stakes could replace the plastic. It might be nice to dremel or carve in the name rather than use a permanent marker with who knows what chemicals attached. That might be what I go to to eliminate the microplastic issue.

Seed saving is cultural. Largely what you are describing with your mom is a cultural shift you are trying to implement. My parents used to save seed by putting unused portions of seed packets in a jar and planting from them again the next year. Very little seed was just saved plant to seed in their generation. Your mom is in that same mind set where an overripe vegetable is starting to go to waste. Unfortunately I sometimes over save seed! I think sometimes I could supply the entire local seed library.

The Hidatsa culture as described in the book "Buffalo Bird Woman's Garden" had a leaf folding technique to mark seed squashes. This was understood by all the gardeners- that squash is for seed, ok, moving on. So basically what you are asking is how to get your mom on the same page as you in regards to seed saving. A large wooden stake that says in big letters "Mom Don't pick this one it is for seed!!!"?? Generally though just talking to your mom quite a bit and accepting that there will be mistakes and some conflict when two people share and collaborate on a garden. Still remember a squash that my mom and sister ate as a summer squash that I wanted for seed back about 2004 or 2005.
show more
4 months ago
seeds and breeding 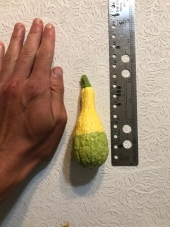 Vining Yellow Crookneck squash
I harvested all the squash that looked close to seed ripe of the Lofthouse Crookneck Landrace.

Then I put a sprinkler on it and the patch is one of the few things that survived that early first frost.

There is one off type, looks straightneck and a bit larger diameter like a zuchhini. Semi vining. Interested Ryan? It didn't make it into the first batch, but now that the patch survived I think it may make it.

Everything was looking bush till the end now a few are starting to look a little vine-ish.
show more
4 months ago
seeds and breeding

William's Seed to Seed Garden
Last weekend of garden starting up.
show more
4 months ago
seeds and breeding
ways to seperate tomato seeds
I don't think powdered milk would hurt the seed but if too much moisture got in it could stick to the seeds. That shouldn't affect much as milk is decent fertilizer. Just might be a bit of a mess at worst. You could always rinse it off your seeds with water when you were ready to plant them. Or crumble it all up, plant the milk with the seeds and water it in as fertilizer.

If you put the milk or silica beads into a little mesh or fabric pouch respectively they should stay separate from the seed.
show more
4 months ago
plants
ways to seperate tomato seeds
When I am doing a lot and don't care about the tomatoes anymore I cut an x on the blossom end then squeeze hard into a bucket. Then I let it ferment for a few days till the gel seperates. Then I spray to rinse.