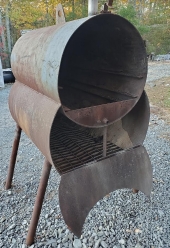 Retort Build From Smoker
Innovating is hard!  Keep at it and keep us posted!
show more
6 minutes ago
biochar
Building raised bed with used redwood fence boards
Martin - sounds good!  Most redwood won't be treated or stained  - and even if it was its probably so weathered that whatever was there is gone.

One thing you might consider:  putting together some 1/2" or 3/4" fence boards won't be as stiff as a 1.5" board.  So three of them sounds good ... plan to screw them together.  You might want/need to provide a 2x2 as a backer for the screws to sink into and to provide additional stiffening.
show more
10 hours ago
gardening for beginners

How can I naturally (or more naturally) give this checkerboard blue squares?
That's an interesting thought Douglas ... the "blue pine" I've seen is blu-ish, like it was splashed with watercolor paint and was more of a "blue tint" than a deep blue.  Has anyone seen a deep blue pine?

I know the OP is about blue... but for a chessboard there are a multitude of white woods and then of course Black Walnut.  Cherry, if left out in the UV light of the sun a while, can also be quite dark.  There's a whole roster of exotic/tropical woods that are dark or black
show more
21 hours ago
finishes

How can I naturally (or more naturally) give this checkerboard blue squares?
I'm not sure how "natural" these are, but there are some stains intended for wood and could be used as a comparison.  Oddly enough ... blue food color is also a pretty good option, although I'm not sure how stable it is!

And for both historical points, botanical points and .. get this... ORGANIC dye go for good old Indigo!
https://botanicalcolors.com/shop/natural-dyes/natural-dye-extracts/organic-indigo/

In all instances, carefully stain and then seal.    If your woodworkers haven't yet discovered it I highly recommend Tried & True finishes (https://www.triedandtruewoodfinish.com) my understanding is that they actually physically boil the oil to polymerize it, actually cooking it instead of "cooking" with chemicals.

Now ... does anyone know how to play chess??
show more
1 day ago
finishes 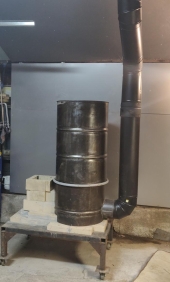 Garage Rocket Stove built to Ontario code
Welcome Richard!  Its great to see people striving to integrate RMHs into current code restrictions - I think it really helps with their adoption and acceptability.

Do try some different wood - notably different widths of wood.  Its generally the case that the closer the wood is to kindling (the more surface area it has) the faster/hotter it burns.  There are also significant differences in the quality (density) of the wood and how well dried it is.  For instance although I love burning dropped sticks, its still hard to beat a kiln dried 2x4 end that is split into about 20 pieces!

You may also find that some small tweaks ( a "trip wire" and/or P-Channel if not already installed) will help it burn better - although it seems that burning is already working well.
show more
1 day ago
rocket stoves

NOTE - when I went to the Discover page I entered "Permaculture" as the search term.  Gumroad is only searching TITLES - so only one of Paul's items comes up, and two from Matt Powers.  Special consideration of titles is needed!

show more
2 days ago
tinkering with this site

Karl Harasyn wrote:
What in hoping this would accomplish by having the top of the heat riser submerged, with a jacket around it before passing exhaust is to extract the maximum amount of heat from the fire while also keeping the burn chamber and heat riser hot (as opposed to the water pulling heat directly from an unjacketed heater such as a commercialy available hot tub snorkel stove).

I just want to revisit this  - its a perfectly understandable approach to put as much of the hot area into contact with what you want heated.  Burn wood, make heat, move heat.  The hard part to understand about RMHs is that the gain in efficiency happens during the burn - that the combination of feed tube, burn tube, riser (and bell) are a finely tuned engine for producing heat.  Altering a part of the engine can have huge consequences ... so too short a riser, placing the whole thing in water, too much cold back pressure - these are like the potato in your auto exhaust, or some some of intentional de-tuning of your engine.  And you can't just have a free-burning stove in a tube and expect it to perform.  I do wonder how the proposed idea - inserting the entire bell in the water - would work.  It seems to me like all that cooling would act like a brake dragging on the engine, but maybe not.

So to paraphrase Glenn, put the engine outside of the IBC.  Wrap it in insulation, then pipe that heat into a stratification chamber in the IBC.

Note that the numbers are very different for heating a house - comparing a standard wood stove to an RMH is slightly unfair b/c the standard stove doesn't try to store heat in a mass.  But it does allow Paul to boast about how little wood they use!

So Karl ... building a J tube OUTSIDE the IBC means you can do it with brick/ceramic and it will last longer.  Use the propane tank as a stratification chamber in the IBC (I'd suggest at least two of them).
show more
4 days ago
rocket stoves
Mapping apps?
Definitely check your county to see what GIS they provide.  My county provides a wealth of map info - contours, historical aerial views, and LIDAR - which is perhaps the most interesting for viewing  the terrain (it shows 70 year old tire tracks from logging).

the Soil Survey is the only one that shows you the different soil types.

On my phone I have "Topo Maps" that shows  me satellite photos overlayed with contour lines.  It allows me to mark points and track me if I want (sort of shows trails and proto-trails).  That's helpful for looking at areas after the fact, perhaps on the big desktop instead.
show more
4 days ago
homestead

the well is in
re: head, water pressure & the cistern:

The well location is, at best making all sorts of assumptions about 40' contour lines, 80' above Ant Village.  Probably closer to 30'.  (based on topos y'all).  Pumping the water to the highest point on the lab (I think that's going to be above Dances with Pigs) it would be possible to reach well over 160' head.

A:  I doubt it.  There aren't a lot of shower heads & kitchen faucets around.  We're talking about filling buckets and such, maybe some irrigation (yeah, doubtful.  its a maybe, more like a maybe cubed).  Its a lot of extra pipe - looks like 1500' minimum.  And now a pump that is rated for 300' lift in the well plus ~160' head.  And you might want to run a dedicated line from the well to the cistern, with a separate line coming back from the cistern (not sure, but I'm building a worst case scenario here).  And longer electrical wire runs.

The alternative is a booster pump - there must be such a thing at basecamp.  More power to consider in the solar situation, but  I'd think it a fair tradeoff vs 1500' feet of additional pipe/tube and assorted complications.
show more
5 days ago
wheaton laboratories

I don't remember my propane tank sizes ... around here a 4" round cross section is generally considered the minimum size for an RMH.  So make sure that there is enough room for that diameter of pipe.

If one tank isn't tall enough, just weld another one on?
show more
5 days ago
rocket stoves