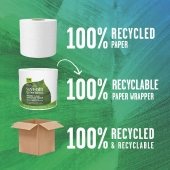 Bonnie Kuhlman wrote:I have been reducing my plastic use for many years.  I reuse glass bottles for water bottles; I use my own reusable market bags; I store leftovers in glass baking dishes, but even these have plastic lids.  The things I find difficult are the groceries I purchase: sour cream comes in plastic; most yogurt come in plastic (I've found 1 brand in a jar); bread, tortillas, chips, crackers all come in plastic; most produce: berries, lettuce, carrots, etc. come in some form of plastic.

Has anyone found solutions to these other than making your own?

Thanks for posting this Destiny.  I'd really like to reduce my plastic even more.


When buying groceries you can at least bring back plastic bags to reuse for produce.   (Like berries)
You can make your shops more aware by leaving packaging in the store.  You have  to be quite charming to accomplish this.

getting a 20% kickback on my rocket oven kickstarter

Hi Paul,
I contributed to the kickstarter in day 1 and I've shared on FB.  Yes,  I want in on a kickback.
Thanks.
show more
2 years ago
tinkering with this site
Build hugel bed on concrete
Would I just heat compost in the sun?

yes the compost and large stumps of wood were not added this time. Although some of the original wood is still in there.

In the future, is it better to just layer on top of existing pile without moving humus to the top?

And what to do about perennials when the pile has shrunk?  I removed the lemongrass, tumeric and chive and put them on top after rebuilding.  Or do you go with a more shallow bed?

Can you tell I'm a newbie???
show more
2 years ago
hugelkultur
Build hugel bed on concrete
Correction: I built the hugel in October 2016, added more layers and planted all that stuff in April 2017, went away end of June for 5 months, back at it in January 2018.
show more
2 years ago
hugelkultur
Build hugel bed on concrete
I did build that raised hugel bed last year With a 3-4 inch layer of tierra negra ( black soil) from a nearby lagoon on top.  I planted some greens and herbs which sprouted right up (I brought seeds from states).  I also transplanted some cherry tomato seedlings.  I threw in some garlic, ginger and tumeric that sprouted in my kitchen.  From my compost, even tho I screened it, I got a bunch of volunteer squash (one turned out to be cantaloupe).  They were growing so rapidly I just watched and they took over eventually shading out all my little seedlings.   A neighbor friend gave me chives and lemongrass which went in there too.
Then I went away for 5 months and my neighbor kept an eye on my property.  He harvested tomatoes and lots of local calabaza ( the volunteer squash).
When I returned, he had cleared all the vines from squash and moved them to another location - which is becoming a spontaneous hugel that needs some organizing.  All that remained in my bed was the native lemongrass and chives, and a turmeric plant.
The height of my mound was reduced by more than half, but when I dug in it was beautiful humus.  Just gorgeous.  In my enthusiasm, I dug a lot of that humus out, I left the partially decomposed wood on bottom.  Used some of this black gold to feed trees on the property.  Then I layered more leaves, branches and other
browns, but no large wood.  On top I returned the humus and more soil from the lagoon.  I did not put the compost to avoid the squash explosion - which is happening every where else I put compost.
Okay (turning into a long story) -  I've planted in this revised hugel and no seeds have sprouted.  I'm getting various sprouts - some weeds, trees, unidentified things.  The chives and lemongrass returned to the pile are doing fine.
The season is different - last year I planted in October, this year in January.  It's been a cool January for Quintana Roo, but temperatures similar to spring on east coast when you'd begin planting.
So I'm wondering if I shouldn't have messed with the hugel by re-layering the humus to the top.  What is the best way to deal with the volume reduction (remember this pile is built on concrete slab - From original posts).  Did I not put enough material in there to begin with?  Would appreciate your thoughts.
I'll try to figure out how to add photos.
show more
2 years ago
hugelkultur
Basic question
Exposing my newbie status here:  I see references to zones in many listings.  how do I determine my zone?
show more
3 years ago
hugelkultur
Build hugel bed on concrete

Lenore Ogbor wrote: I'm in F Carrillo Puerto on the highway from tulum to chetumal.

Oh yeah ... we came through there just Friday last week.  Spent a few days in Chetumal.  We have another permie friend just this side of Vallodolid on the Cancun / Merida road.

Soon there will be enough of us to have a get together.

To amarynth leroux: I'm in F Carrillo Puerto on the highway from tulum to chetumal.
show more
4 years ago
hugelkultur