Who knew headlamps could be so much fun...
I've used 5 different models of headlamp, and this one from the evil Mart of Wal is head and shoulders ( ha-ha ) above All of them. It's also 1 of the cheapest.

Double A. rechargeable batteries are very easy to swap out and last for years used only in an led headlamp. Keep 3 in the headlamp, 3 in the charger, you'll always be ready.

There are 3 intensities of spotlight beam, and 1 broad area beam. 200 lumens.

The build is very sturdy, each 1 has been dropped at least a dozen times and the only part to break is the hard plastic mount which holds the bands in place. Still, lightweight.

Most importantly to me, the mode switch is a dial rather than a button. You can quickly turn to what you want rather than cycling through modes you don't with a number of button presses. Also works better with gloves! Sure, it turns on in a bag accidentally more often, but just turn 1 of the batteries backwards to prevent that.

You bet it's fun!
show more
1 day ago
gear 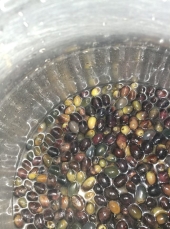 What's fermenting in your kitchen?
I just took out a batch of oat amazake. I made some with arborio rice earlier this week but it was a little dry, especially the koji grains because I didn't rehydrate them first. I was following instructions in the Shockeys' "Miso, Tempeh, Natto and Other Tasty Ferments" but I think it's important to rehydrate dried koji grains first, or you might get crunchy bits. I'll probably use the remaining rice amazake to make shio koji, apparently the world's best condiment, and to try a lacto-ferment WITHOUT salt...imagine! The Shockeys explain how to do it, but unfortunately not the shelf life. Even the internet can't help with that. I want to remain surrounded with ferments, but to omit as much salt as possible.

Got some kkakdugi fermenting...I bet a lot of us have more daikon radishes than we know what to do with. This is daikon radish kimchi, and I've kept it for up to a year. It's really best from your own radishes so that the greens are freshest. It's very hard to find daikon with greens included because they are so perishable.

Still have burdock and cabbage waiting in the fridge for a burdock kraut.
show more
1 month ago
cooking
Lack of nitrogen fixing nodules.
Whoa Dr Redhawk, this was a lot of typing! I hope it wasn't covered in your soil series, which I am slowly working through when I don't have enough else to read here (rarely). You answered a lot of questions I haven't even formulated yet.


All of the plants infected by Frankia, with one exception, are trees and shrubs, whereas among the legumes both annual herbs and trees may be infected by rhizobia.

What is that one exception? I have very little experience with Rhizobium, but a fair bit with Frankia, and I can't turn soil at my place without finding nodules. It's become a party trick for explaining nutrient cycling to visitors. But I wonder if I should encourage Rhizobium as well, come next spring. There are probably some on the many patches of wild & some cultivated clover that I have around.

This also makes me wonder about my soil pH, which I have never comprehensively tested. In "Teaming with Microbes" the authors assert that "nitrogen fixing bacteria generally require a pH above 7." But then "As soils become dominated by fungi, the populations of n-fixing bacteria required to convert ammonium into nitrates diminish because the pH is lowered by the acids the fungi produce." My soils seem to be both very fungal (just from looking at leaf litter and how quickly it myceliates, or how thoroughly flushes of, say, Sulfur Shelf or Dead Man's Fingers or Angel Wings dominate) and neutral/base. Due to historic logging, there are not a lot of conifers around to lower pH. Fungal prevalence vs. N-fixing bacteria sounds either/or and I'm sure it's more complex than that.

I also think there is an aerobic component to this process, that is, if oxygen availability drops below a certain point, it stops. But I can't find where I noted this in the books.


Because the reaction can only occur in a low oxygen environment, the process is often dependent on hemoglobin compounds found in the nodules, which are virtually identical to those found in the red blood cells of animals.

The plants provide the hemoglobin as well as the nodules?


Nodule size can be an indicator of which type of nitrogen fixing bacteria are present. (smaller normally means Rhizobium, large normally means actinomycete).

Having never seen a Rhizobium nodule, I had to Google them...I guess by "small" you mean "from the size of a brassica seed to a currant".

This is probably a good place to ask another question that's been bugging me: what is the best use for severed nodules? I've been burying them whole with whatever I'm planting. Maybe I should be chopping them in pieces, or putting them in a solution for dispersal, or both?  Can Frankia populations be cultured a la compost tea? Would there even be any point to that in soil amply shot through with noduled roots? I don't know what happens to Frankia populations in a nodule when they are severed from a network.

"Teaming with Microbes" also says "some studies suggest that Frankia species can fix nitrogen without the association with a plant root," what?? Unfortunately they eschewed footnotes/endnotes.
show more
1 month ago
cover crops

Wood Chippers
Agreed about rentals. And renting for a week or a month gets you the best price break. We used to have a daily rental for $100 20 miles away, now it's $200 and 35 miles, so it makes more sense to stack up your branches beforehand and blast through them all at once. As far as I've seen, if a chipper isn't mounted on a trailer or attached to a PTO, it's not worth your time.

I used a  neighbor's Vermeer 6" woodchipper to fill my truck twice a couple years ago, loved it, until I found out it was $26000.  I'll be making ramial mulch in the spring for at least a few years, so I've been looking at used chippers in the area (or vehicles that are cheap b/c the PTO is the only thing running on them). That might shake out cheaper unless there are a lot of repair headaches. Units of that capacity usually list around $5-7000, but I have no idea what to look for in assessing the condition of the machine. I'm hoping to hire a diesel mechanic to join me for any particularly attractive prospects, but the closest one I know is in Seattle.
show more
1 month ago
gear
Lack of nitrogen fixing nodules.
So one sees a lot of nodules if N levels are low? I have planted a lot in forest soils largely populated by red alder (Alnus rubra) and noted that alder growing in sandy soils produces a lot more nodules.

I have also seen nodules form in rotting alder sawdust; seaberries (Hippophae rhamnoides) in sawdust trench storage still form nodules. Interesting that Frankia bacteria would be working in an environment so unlike soil!

Does the size of the nodule indicate anything? I have seen some the size of a kumquat.
show more
1 month ago
cover crops 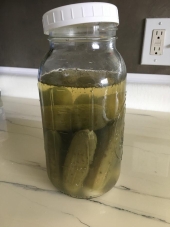 Fermented Carrot Pickles, I Hope
Hi Tereza, the spring is stainless, like the lid, though I don't know what alloy, and whether it contains any steel. It's made here, but probably not by union labor. It's way more resistant than a spiral notebook, I can only compare to...1/3 of a mountain bike shock? You can really pack your veg down then screw the lid on, and the silicone gasket keeps the spring from scraping on the lid as you tighten. Even with a jar packed solid, it keeps the uppermost material an inch below the liquid.

I have no criticisms of it...you can even snap out the silicone airlock to clean it, and under it. But don't lose it, it's little and fiddly.

Let me know if you can make a spring they can apply that kind of resistance... as I understand it springs require careful tempering of metal. At any rate any wire other than stainless would corrode or leach.

Kim Goodwin wrote: I don't quite get how the spiral part works, but I LOVE the stainless lids.


You just put the spiral in the jar on top of the veggies, and when you put the lid on, the spiral holds them under the brine.

Yes, and it's like a spring: it extends as resistance lessens, meaning an emptying jar always has its solids well below the surface.
show more
1 month ago
fermentation

Fermented Carrot Pickles, I Hope
Chris, you're gonna have so much fun experimenting with ferments!

Fermentation takes a week at 72 deg F. It's very slow below that, and hotter than that encourages other microbiology you don't want. I use 3 tsp of salt per pound of vegetables, but have been experimenting with using less salt and more active brine from inulin-rich ferments (containing one of burdock, sunchokes, bull thistle root). The inulin feeds lactobacilli, helping to crowd out yeasts that make ferments soft. Softness is especially ruinous to green tomatoes and sauerkraut...I believe it's caused by Brettanomyces bruxellensis, because it looks like that yeast formation and smells a little funky/keroseney. Kim, maybe that's the white mold you get; does it make the ferments softer? And yes, throw away the zinc-plated lids that come with your mason jars, unless you also use them for canning. I still have rust rings on my oldest jars. The plastic lids are the best storage option.

I find that ferments last up to 10 months in the fridge, but I'm still eating kimchi from a year ago, the oldest ferment I've kept. Sauerkraut and green tomatoes don't last as long without getting mealy-soft.

After having tried all the other lids, weights and airlocks, this one is my favorite. It's also the most expensive, but foolproof: I've broken the glass weights and cracked the plastic airlocks. The stainless steel lids never corrode,  the coils keep every last speck of veg below the brine, and the silicon seals and airlocks are easy to clean, flexible and strong. The designer is a homesteader in Colorado who also designs and sells medical equipment, so he knows his sanitary materials. 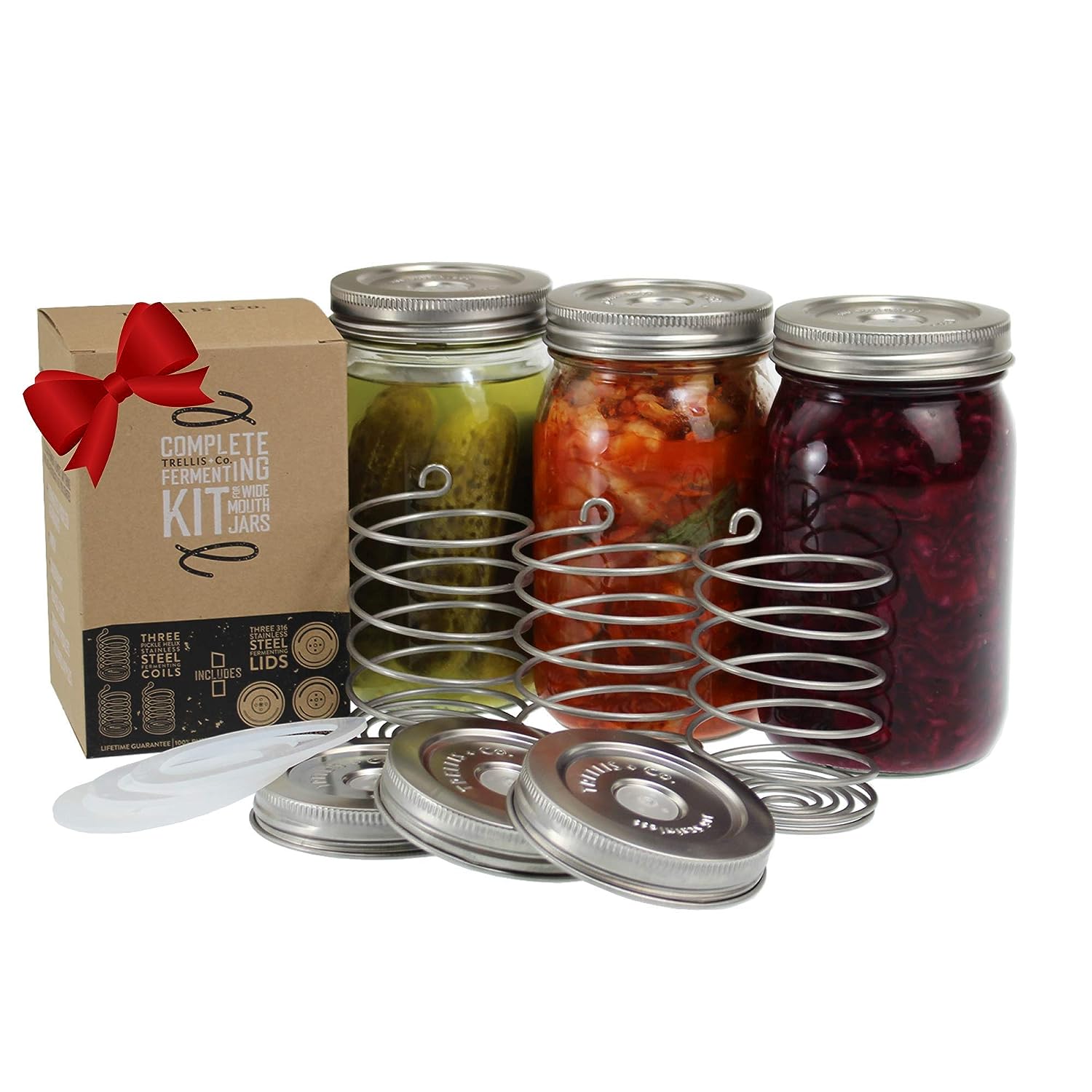 I used to fool with tiny saucers, demitasses with rocks in them, whatever to keep the veggies below the brine. I wish I'd invested in proper kit sooner, I'd have saved many pounds of spoiled/soft ferments.

Does anyone else make Bone Char?
I build a fire in a 55 gal burn barrel, and once that has embers put a fresh layer of wood and then bones on it. these are big gross bones like quartered cow pelvises , spinal segments, shoulder bones. once those start dripping into the embers and wood fire , I add more wood and then more bones, being mindful of the rate of burn and dampening, if needed, with excessive fuel.

When the barrel has burned from full to bone and wood embers, I quench it thoroughly. resulting char is mostly bone with a little wood. I haven't been doing it for long enough to speak to its effectiveness in soil building.
show more
1 month ago
biochar

And good point that enrichments applied to saturated or frozen soil are probably wasted and sometimes illegal. Even mycorrhizal inoculant is better used at another time.

Liberating, in a sense. I can turn my soil building attention to composting only...but Sluggoo investigations should similarly wait until spring.