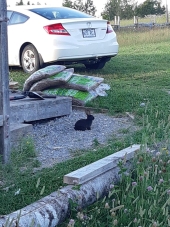 Tips to catch a rabbit
put some carrots in a live trap. how i caught mine when the neighbors' kids let it out.
show more
2 months ago
rabbits 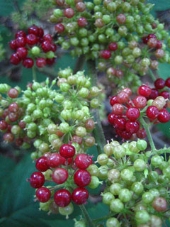 Anne Miller wrote:Steve, thanks for sharing.

Which variety do you have?  I see rare seeds has three different ones:

For anyone interested in more information here is a thread about the different Physalis varieties:

im growing aunt molly, niagra and hanover. also started cape gooseberries. the ground cherries are now ripening but cape gooseberries are just flowering. all are in pots so i may keep a few cape gooseberries alive in my grow room this winter so i get a earlier crop of them next summer. my 2 yr old niece loves those things. she raids my plants whenever she visits. i grew the blackberry ones too. they are ok but a pain to pick. i have plants of them coming up every where i grew them last year as well as a dozen aunt mollys. crows been getting into my blueberries but leave the groundcherries alone. they are one of the most bulletproof things i grow. saw a vid on youtube where a couple ladies were growing 20 of them on a raised bed through weed cloth and left little dips on either side of the bushes so as they fell off they would roll into these dips for ease of picking. thinking of doing that next spring. easier on the ol' back. made some preserves with them last summer. was very good. doing a pie this summer.
show more
2 months ago
fruit trees 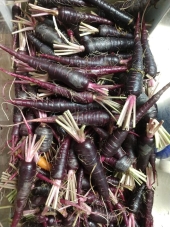 Any knowledge of the most nutritious plants and their variety ?

Ralph Sluder wrote:We have been growing the darker varieties over several years.  Some, like carrots and cabbage taste more robust with higher brix.   What that means I'm not sure.
Maybe a bigger difference can be found in remineralizing soil, using a
Greater diversity in fertilizing. We now add sifted chicken run soil, leaf mold, compost, thick hay mulch worm casting, and even making small batches of biochar. Not a lot of anything in particular but a little of everything, everywhere as we get it..   So assuming all that good stuff is available to the plants they would reach their genetic potential over time.
After cancer hit a close family member several years ago we now grow the super food stuff. Morninga, very easy to grow here.( Taste like dirt but we dry and put in everything )
Tumeric, purslane and several others.

Do you mean Moringa ? I've heard a few good things about it.


steve bossie wrote:like was said, soil health affects nutritional quality. i grow black chokeberry, black currants, blueberries, blackberries, raspberries, strawberries, mulberries, goumi, autumn olive and sour cherry. all are in their own right are super foods. some more than others but incorporated in your diet they improve health and reduce chances of disease. i also grow the more colorful veggies for their benefits as well.

Robin Katz wrote:The microbial life in your soil will also have an impact on plant nutrition. I tend to grow the most colorful varieties I can, but as others have said, it comes down to the soil. The soil structure, minerals, microbial life, etc. will all improve the nutritional value of your food.

Yes, one important step would be to have the soil contain all the important minerals (not just the NPK), a good soil texture, structure, and a good microbial life.

But let's say it's all taken care of. Best soil possible, no matter what is being planted. Let's say no matter if it requires clay or sand, acid, neutral or alkaline pH, it's covered. Yeah, black currants, blueberries, etc are really good to have around. Are there any cultivar that has better nutritional value than the average plant ? Like with my tomato example: yes, tomatoes are good to have around, but the "Caro Rich" has much more vitamin A than the average tomato. Black currants, blueberries, raspberries... good to have around, but is there any cultivar, variety, whatever it's called, that has more nutrient than the average, that was selected so it has more nutrient ?


some of the cultivars are rated as having better nutrient profiles but i dont remember which ones. these minor fruits havent been improved on as long as more traditional fruits so i think the nutrients arent much different than the wild ones.
show more
2 months ago
organic

Any knowledge of the most nutritious plants and their variety ?

Dorothy Pohorelow wrote:In Tomato Junction they have talked about the lycopene in tomatoes.   Red tomatoes have a form that our bodies can't use unless the tomatoes are cooked.
On the other hand orange tomatoes have varying amounts of tetra-cis-lycopene which our bodies can use without the tomato being cooked.   There was/is a group in New Zealand that tested a number of varieties and listed the amount of tetra-cis-lycopene they produce.

The "blue" tomatoes produce the same blue pigment that is in blueberries and our body uses it the same way they would use blueberries. These ARE NOT GMO but rather were developed by crossing wild related species into domestic tomatoes.

And yes they have also talked about beta carotene varieties.  It really is fascinating when you start delving into what tomatoes really have to offer...


look into Autmn olive and goumi berry they have up to 10xs more lycopene than tomatoes and are perennial bushes. aronia or black chokeberry are off the charts for antioxidants and polyphenols. black currants and elderberry fall in a close 2nd. all are easy to grow with a low calorie count. i either make freezer jam or low temp juice from them to protect their nutrients from degrading. im growing atomic orange and painted mountain corn from rareseeds.com for fresh eating and cornmeal. atomic orange has high beta carotine and painted mountain has high antioxidents for a corn. also higher protien and they grow great in my short growing season. also growing red and blue fleshed potatoes for the same reasons. beets are really good for this also and i live me some spiced pickled beets! got 4 rows of red and purple carrots. ;)
show more
2 months ago
organic

want fruit in same summer? grow ground cherries
grow ground cherry . not a true cherry but a sweet relative of tomatoes. they taste alot like pineapple and make great pies and jams. kids love picking/ eating them. also very good for you. have been found to help fight cancer also. 5 of these plants produce enough for a family of 5 . if your in a cold climate like mine ,start them indoors now and by july you will be eating them till' frost kills them. where ever they fall they will reseed so you wont have to plant them again. theres tons of them in my food forest.  bugs dont bother them either. get seeds at rareseeds.com. good luck!
show more
6 months ago
fruit trees

Best Beginner Mushroom Varieties
slugs get them here.
show more
6 months ago
fungi
Growing veggies under fruit trees?
ive planted right under my trees on the south face with no issues. i wouldnt do that with shallow rooted bushes like blueberries cane fruit or elder as they might compete. all my alliums are under my fruit trees hopefully deterring pests
show more
6 months ago
market garden

Francis Mallet wrote:I built the small size Woods house which is 6x10 and according to the author can accommodate 12-15 birds. I currently have 14 birds in there but during summer I had 24 at one point. I feel that 14 is too much during winter because the chickens don't go outside, 10 would be better.

January/Febuary are our coldest months with lots of nights in the -20F. One rooster got frostbite on its large comb and wattles, the others are ok. His problems don't come from the coop design, he's just not suited for the climate here.

The coop has no floor, is not insulated and not powered (no heat and no light).  I spent some time in there with the chickens during a bad winter storm, the air inside was perfectly calm. I keep the windows covered with plastic but the front is always open. I've never seen any signs of condensation or frost.

If it smells when the ground thaws I add more shavings. In spring I empty the coop and put new shavings for a fresh start. I dump everything in the run to start the compost pile.  I can hear the doubt when I mention my coop in unheated. I've visited a couple of heated coops and I understand the concern. Without electricity I don't think those coops would work, and the stink!

I never had chickens that liked snow. This fall I bough a hay bale and when it's nice outside I'll spread some in the run and they like it a lot.


i too put down some hay. on nicer days i open the door and let them wander where i snowblow.
show more
7 months ago
chickens

Working on chicken coop design for <-20F temperatures. Need advice for winter ventilation
my birds survived with light frostbite on their combs - 40f 3xs and -43f 1x this winter. no heat with open eaves in a 10' x10' coop and they still layed eggs but much less due to the extreme cold. i also keep the water outside so humidity doesnt build up from the steam in there. they drink quickly then eat snow until i water them again. im in N. Maine on the New Brunswick border across from Edmonston, N.B. and by the way, anyone that says leghorns aren't cold hardy, they weren't in any worse shape than my bigger breeds and continued to lay when the others stopped. i dont do light in the winter.
show more
7 months ago
chickens