Who’s Really Practicing Biodynamics?
To directly answer the original question: best source is already on the thread from s. lowe: a Demeter certified directory is exactly what you want. http://biodynamicfood.org/ Go talk to those people, they will be your best first-hand source of information, much better than us yammering internet weirdos.

I lived two summers on an Earthship project in Driggs, ID. There were 3 Demeter certified farms in the valley. Two of them supplied us with produce for our weekly wood fired pizza stand at the farmer's market. It was darn convenient when we ran out of topping to just pop over to their stand. Gotta say, fine tasty produce. I asked around a lot after that, and the consistent answer I got was this:

"Yeeeeah... I've heard good things about [biodynamics], but it's just not something that works into most practical farm schedules. You get done what you can get done." The realities of most farm life doesn't come with the luxury of extra time, for something that can seem rather silly. Tracey's right when she finds it unnecessary - there are plenty of practical ways to make your plants grow.

My understanding of BD is limited but comes down to two basic parts:

(1) There's the lunar cycle, where the moon in different places corresponds to strengthening parts of the plant, much like a magnetic tide. It's not such a wild idea, especially because they've discovered cryptochromes in plants. https://www.abc.net.au/science/articles/2014/01/24/3931083.htm

(2) The preparations and infamous "horn." Basically you're just making specific composts. A lot of this goes over my head. But it has a lot to do with minerals. IE - Horsetail is basically silica. Burying the horn is basically like creating the world's most amazing yogurt starter. Shape is also important here. The horn is the same shape created by the vortex - the little tornado that happens when you spin water really fast to poach an egg, the whirlpool when you drain your bathtub.

Is this a bunch of hooey?

This is my favorite part about biodynamics, and why is it utterly relevant to the conversation around "purple" and "brown" permaculture styles. Here's the hypothesis: The more precisely you follow the recipe, the greater results you will see. And don't take my word for it! The best thing about science is that you do the experiments yourself, and accept the feedback. Biodynamics holds up brilliantly in brown because the more controlled you are about the process, the more you're gaining.

Following on with the browns and purples:

I had a revelation moment here in Australia. I've been living here for the past 16 months, saturating in the mindset of the original permaculture people. I'll see if I can explain it, because it's been swimming around as a vague concept in my mind.

See if you can shift your frame for a moment, whether you identify as brown or purple. Instead of a world where browns look down on purples, and purples discounts brown, what if you placed them on a spectrum? Much like we do at the beginning of a PDC, when students line up on the spectrum between "earth care" and "people care." And what if instead of purple and brown, you called them art and science. They are both so important to the whole of the permaculture movement - that odd global group of early adapters and ecological experimenters, who have seen enough of the current data to discern a disturbing pattern about human life on this planet and where it's heading.

Art is how we understand the world, how we process. Did you ever lose something, and listen to a sad song that helped you connect with how you were feeling? This is the essential value of art. Yes it's messy and silly and colorful and completely necessary in everything. Even farming. And the control of science helps us become better observers and caretakers, noting the subtleties and preciseness that the artists miss.

We need both. And it's time to build some heckin' bridges people.

This is what we've been training for.

Bury that horn Brandon! Then get back to us and see if it did anything!!!

Ramble over.
Thanks for reading if you made it this far!
show more
2 years ago
biodynamic

Caretaking/Homesteading position at 20 year old permaculture fruit and nut tree homestead/Nursery
Just wanna bump this a little... because I'm the one that's leaving! And this is pretty much the most badass permaculture immersion experience you can get.

Let me just gush for a moment.

I came here expecting a summer opportunity to stay 4 months.  I've been here almost 2 years. I work a part-time job at the local environmental non-profit, the Mid-Klamath Watershed Council, located conveniently under 3km away. There are also lots of house-sitting opportunities in the area.

I live in a small, one room cabin (the original tiny home), heated by a wood stove. The hot water heater is propane (though the lower cabin is wood-heated in winter and solar heated in summer). It's cozy, I have my own space in the community complete with my own garden bed, the front porch is entwined in kiwi vines with a privacy barrier of elderberries in the winter. The 8 hours of work a week are very reasonable. Corrina is a great manager and makes workdays pleasant and effective. We all feel accomplished and connected after time in the garden or potting shed together. And Marc is the kind of guy who saw Masanobu Fukuoka speak in person.

The balance between the animal systems, the nursery, and the (many, many, many) mature fruit trees are pretty much perfect. Imagine months and months of fruit - apples, pears, plums, cherries, peaches, pineapple guava, grapes, figs, poms... the grazing is real. I take friends and visitors for a tour and in the right season we come back stuffed and high on fruit sugar. The nearby Salmon River is a well kept secret of beautiful swimming holes that make the hot summer a sacred river season. The community vibe is great, things are very informal and the closest we come to farm meetings are Uno game nights. There's just this feeling of comradery and willingness to honor all the life that grows, in a very grounded and practical way. Even the composting toilets are gorgeous stone masonry foundations that only need to be maintained once a year. I just dug mine out last week and it took me about an hour and a half by myself, it was totally awesome, and I made the elderberries very happy. THIS PLACE IS SWEET. It blows my mind that they don't have a waiting list a mile long.

The family is sweet, the place is legendary. I really hope they find someone as amazing as they are. The reason I'm leaving (reluctantly) is to follow my dream of hiking another long trail... this time the Bibbulmun Track in SW Australia. So you people! You do right by Marc and Corrina!! These people have done more to propagate varieties of edible perennials than any other person or project I have ever come across. They have the freakin' seed of Eden. And they do it in middle of the most epic country... don't even get me started on the bear, elk, cougar, salmon, eagles and ospreys, the ring-tailed cats, the exotic birds that come in the spring for the fruit, the king snakes and otters.... the list goes on. And you see most of it from the front porch, though there's also a ton of cool hiking in the area when you're ready to get off the farm.

Anyway, if you have any questions, feel free to reach out to me or them. Thank you!!!

P.S. This is Karuk territory, so be prepared to be hella respectful of indigenous culture
show more
3 years ago
jobs offered

Rolling River Nursery from California, USA
Just in case anyone is wondering.... the original owners didn't retire... they're still caretaking the property with all the mother trees. They have a new business selling propagation material for all their varieties.

Yeah they are pretty much the most epic, loving producers of living capital that I've ever met. Source: I've been caretaking for them the past 2 years on the Klamath River.
show more
3 years ago
resources: seeds, plants, honey, consulting, etc.
29M lfw Bucks County pa
Yo friend. My parents live in Bucks Co, near Doylestown. Check out Gino's Nursery, they're doing native landscape installation, and my friend Adam Dusen is growing out area varietals at Hundred Fruit Farm. Good luck!
show more
3 years ago
permaculture singles

Ordered rootstocks and scions
These folks have good quality scion wood, grown in Sunset Zone 14. Over a thousand varieties on five acres, quite a collection, so they might have what you want. 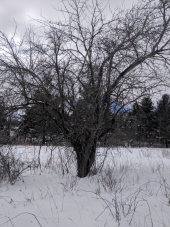 old sick apple tree in orchard
Prune them like you mean it! Might turn out it's not as old and sick as you thought.
show more
4 years ago
fruit trees
Making lye from wood ash?
Just had a friend asking about this... would love to hear the answer
show more
4 years ago
ancestral skills
Work Gloves
Yeah, I was in a large feed store and saw some, that's what made me think about it. Thanks, Deb, that's a great thought about the sealing bag.
show more
5 years ago
gear
Work Gloves
Anyone have favorite work gloves?

Lady hands, long fingers, 5'8", looking for protection from poison ivy and black widows, some light tree work, brush clearing, weed pulling.
show more
5 years ago
gear
Rural Wifi Access
John, that's a great idea! I'll have to check into it. As far as I know, there isn't a signal out there in the first place, but definitely an option worth exploring. Thanks!
show more
5 years ago
gear