Can I fill my swales with wood chips?
Personally I just see them floating away.

With that said, the purpose of swales is of course to hold water long enough for it to infiltrate the soil. Obviously putting anything in it cuts down on the overall volume of water the swale can hold at one time. Seems to me you're limiting the capacity they at which they can perform. If you don't get enough rainfall that will ever be a problem then it's fine. You could also argue in that case you didn't need swales that large in the first place then. I don't have experience with them, but those are just my first thoughts.

If you want it solely for aesthetics that's cool. I just don't see it increasing the effectiveness of what they're intended to do. Take this with a grain of salt however.
show more
7 years ago
permaculture
Thank you for the article about diatomaceous earth, and some questions
Never had to deal with fleas, but if you're going to go through the trouble of doing it, be thorough and do it right....honestly the best advice I can give. If it takes you an extra hour to get under your bed or into the nooks and crannies you didn't before you'll appreciate the time spent when you don't have to do it again because you didn't get them all.

I can't think of a reason a flea wouldn't live on the vertical surfaces of a couch. Focus on the creases in the fabric. The dust should stick to the couch material (unless it's a slick leather) more than well enough.
show more
7 years ago
bugs
raccoons
Everything likes the taste of chicken lol.

Raccoons are a different beast however. It's their smarts and curiosity that make them more a threat. I have a chicken keeping neighbor who's property encircles the back half of mine who keeps them in check and provides a buffer. The only ways I've ever really seen work are trapping and shooting. I wish it weren't the case, I find them entertaining,mbut it seems to be. All it takes is one coon slipping through the defense and the next thing you know it brings its entire extended family with it.
show more
7 years ago
predators 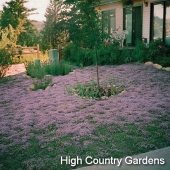 Tips for a thyme lawn
I've been wanting to do this for awhile.

Is there any place to get seed cheaply? I bought a packet of "magic carpet" thyme, to try out from a place called outsidepride and it ran $10 a packet. Packet supposedly covers 10 sq ft I think. At that rate it would cost a fortune to do even my small yard.
show more
7 years ago
lawn
Tree ID_What type of Apple?
^that would be rather cool.

You could call it the Vath-ple, or vapple lol
show more
7 years ago
trees
Healing a piece of land. The recipe.
Mines been mixed. I'm able to weaken the grass off enough to finish the deed with a thick mulch but it never totally kills it. I usually get it dry enough that I can burn the rest out. Plastic helps, but doesn't do the trick alone.
show more
7 years ago
soil
Healing a piece of land. The recipe.
We talking broadfork or run of the mill garden fork? I've tried the later, and well, it's more work than I wanted with the limited time I have. Area to cover is going to be a huge factor. Don't get me wrong, the results of the fork were soooo much better than tilling, but switched to an initial till followed by hand work to get the areas I really wanted improved to my specs.

I just got done putting a garlic bed in a few hours ago actually. Where I put mine was terrible clay (backfill from a recent septic system overhaul) so I went with a raised bed using cinder blocks 1 high. I cut the sod out, forked the clay soil, added compost, then topped it off with a commercial garden soil. I figure it should help with the actual harvesting of the garlic next year. To be honest if that portion is harder than it should be I'll never do it lol.

I'm leery of biochar, but I have the opposite problem you have, terribly alkaline soil so you should be in the clear. All in all sounds like a great plan.

Is your tiller a walk-behind? I find them suitable for land previously worked up, but if you're breaking fresh ground with them they suck lol, I spent more time being dragged around by it and fighting it than tilling soil. I had my dad bring in one on the tractor and the results were a night and day difference to say the least.
show more
7 years ago
soil
**Need help with Black Walnut juglone at my new house!
Agreed Dan.

Juglone is very real, but I think it's impact gets exaggerated just a bit. There's more than few black walnut trees in my area and there's usually something growing around, or under it which technically shouldn't be there. I kinda look at like the old bumblebee debate, for ages science couldn't figure out how bumblebees could fly, no one seemed to explain it to the bees because they kept flying anyway lol.

Now things may not grow as fast, or as well, under a walnut, and some may even die, but too much weight is put into the juglone debate. Obviously I wouldn't risk expensive trees/plants, but there's a way around it if you look hard enough.
show more
7 years ago
trees
**Need help with Black Walnut juglone at my new house!
I'd personally leave the tree and design around it. If you're going for a food forest that tree alone give you a 20 year head start.

You can use tolerant plants around the tree to serve as a buffer for less tolerate species as you work your way out from the walnut. I have some at the front of my property and I'm growing goumi under it now, and plan on planting some daffodils and other tolerate bulbs to turn the area into a focal piece (it's in the front yard). Currently I only have goumi and lambs ear (great homemade bandages) but there's a wide variety of plants that will tolerate the juglone, and contribute to the system you're building.

Doesn't hurt to have a reliable source of nuts either as nut trees take wayyyy longer to be productive than fruit trees do.

EDIT: I should also add cutting the tree down won't help as much as you think. The roots have very high concentrations of juglone, and it will remain in the soil quite awhile. Unless you dig out the roots (have fun if you do) you'll still have to design around it.
show more
7 years ago
trees