Passive Solar "Temp Greenhouse" for humid south (zone 7)
Good points.
There is not just 1 type of polycarbonate, but hundreds of varieties.... so it is very hard to compare a polycarb sheet to poly film without knowing the thickness, R-value, light transmission, warranty, predicted lifespan. The polycarbonate I am used to is a double or triple layer product and far superior to poly film -- with an R-value of almost 3, 10-year warranty, and ability to seal well to the frame -- it's far more energy-efficient. But that is probably not what you are comparing to. To see if it makes sense you'd have to do a calc of upfront cost and how long you expect to replace it... that way you can look at the true cost over 10 years for example.

Sounds like you've got a plan. You can get poly film that is UV stabilized (again more expensive, but it lasts far longer).

show more
4 years ago
greenhouses
Greenhouse and humidity - how much frost protection does high humidity give?
Hi Daron,

I see. Yes, these are referring to the same effect as I mentioned above... that water gives off some heat as it changes from a liquid (water) to solid (ice) through latent heat. They just assume that the vapor is condensing from humidity first, which of course makes sense.

But basically your greenhouse is going to be humid at night regardless. Plants respire water during the day, so you often get high humidity levels during the day (hopefully not too high...) at night the temperature drops. Colder air can hold less water so the relative humidity drops... usually to 100% percent (= condensation). So you will get this effect no matter what if your greenhouse freezes.. you don't have to increase humidity Most greenhouse growers try to keep humidity down, bc it has many negative effects for plant health.

Note that it's not a super dramatic heating effect or anything. Most people try to keep their greenhouses above freezing anyway so I have never heard of someone trying to utilize this effect. I have mostly heard about it for outdoor farmers... their crops are going to freeze anyway on a freezing night. To give a degree or two (my best guess) of protection they spray crops to take advantage of latent heat as the water freezes.

Sounds like an awesome project. I think you're on the right track. As for the rollable roof... I would recommend leaving the roof on and just using a shade curtain to reduce heat gain when it gets hot. Rollable roofs are challenging logistically (something durable / not leaky during the winter, and malleable enough to roll away in the summer. I think you are going to give yourself a very burdensome project year after year). Second, rollable materials ... you are probably talking polyethelene film at that point, with has a few year lifespan. That means replacing it after 2-6 years... not a fun cost or project for the environment. A shade cloth is easy to add on top of, or underneath a roof. I would personally focus on cross ventilation with plenty of operable windows and doors.

Rollable greenhouses are possible (big in Florida). I haven't seem many as attached structures like you are talking about though.

show more
4 years ago
greenhouses
Greenhouse and humidity - how much frost protection does high humidity give?
Daron,
I haven't heard this. Can you explain the reasoning or give where you saw this piece of advice?
It's true that when water freezes it gives off a bit of heat via the phase change... a reason why sometimes people spray crops before a freezing night... but I don't see how water vapor in the air would have the same effect. Interested to learn more.

compost bins next to greenhouse
Beth,

I personally do not recommend this route... mostly because compost piles often come with bugs, and that easily transfers to your plants. Greenhouses have challenges with pests as is. Adding to that just makes life a lot more difficult. Note that a perfect compost pile at very high temperatures ideally should not attract many insects, but it's hard to get composting perfect. Perhaps there have been successful installations, but I have not seen many. The New Alchemy Institute did quite a bit of research on piles inside the greenhouse in the 1970s, but transitioned away from the idea after having issues with ammonia build up and insects.

Another challenge is that piles generate heat typically (if doing properly) and you don't want heat in your greenhouse all year...

Two methods where I have heard / seen composting working... Creating a "hot bed" -- this is an very old technique where you compost directly in growing beds and use a layer of bio-filter (soil at the top to absorb ammonia). Second, composting outside the greenhouse in the winter...Growing Power does this well because they create very high-heat (ie. low insect) piles and only use them around their hoop houses in the winter. I write a lot about composting as a heating method in the book below if you want to go further, particularly compost heat exchangers (the Jean Paine systems) though those are a bigger investment.

Hope that helps. Just some words of caution I guess.

Greenhouse Book Recomendations, Please!
Katherine, you can try to win a free copy of the book this week via the forum thread - https://permies.com/t/64206/Lindsey-Schiller-author-Year-Solar

Modifying existing greenhouse into something useful
You described the challenge with greenhouses perfectly -- way too hot, way to cold.... A big reason why the dinky greenhouse versions don't work very well as year-round growing structures.
To combat overheating, I would add fans (though you have to get electricity to it). For growing in the summer, perhaps you could remove one of the panels of glass for more airflow?
To combat freezing at night, I would try to seal it up as much as possible by caulking the seams. I am guessing they leak like a sieve which won't do much for retaining warmer temperatures at night.
Then, yes, thermal mass is a great idea. I would consider water barrels if you can fit them (perhaps under growing benches?). Just wrote a blog on water barrels in greenhouses if you want to see some pics of others (though obviously you don't have to go as far as a water wall; simple jugs can help a bit). http://www.ceresgs.com/tips-on-using-water-barrels-in-a-solar-greenhouse/
show more
4 years ago
greenhouses

I contacted you a while ago about being a case study in our greenhouse book on energy-efficient solar greenhouses... Glad to see the project came along.
I agree with some other comments, that the roof slope looks a bit shallow to collect sufficient sun in the winter (given that the angle of the sun is quite low at that latitude). Did you do any calculations on that?

Thanks for sharing and posting the pics!!

show more
4 years ago
greenhouses
How much protection does a basic greenhouse give?
Hi Joylynn,

My thoughts mirror those above - R-value is a measure of how much heat loss occurs through a material. It is only one of the ways a greenhouse looses heat. Air infiltration is the other major one (air seeping through cracks) so sealing up the greenhouse with caulk would be a good move to get more out of it.
To put R-value in comparison, the walls in your home probably have an R-10 to R-20... so greenhouse materials are very inefficient / poor at retaining heat. There is a lot more about heat loss in the book below.

Another tip to get more out of it -- use two layers of protection, like a row cover or plastic bottles over sensitive plants inside the greenhouse. (What Eliot Coleman is well known for). You can also experiment with using thermal mass like jugs of water around plants to make pockets of warmer air. 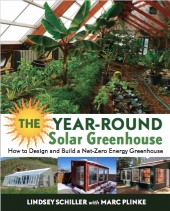 Welcome Lindsey Schiller, author of The Year-Round Solar Greenhouse
Thanks so much for the warm welcome. I hope you enjoy the book and would love to hear your feedback, questions, wishes for a next edition etc....It can always be improved, but I am glad to have a start on the shelves that can enable more people to start growing their own fresh produce sustainably & year-round. Thanks again.
show more
4 years ago
greenhouses