I haven't read "greening the desert". But I suppose one thing that Fukuoka had not addressed is the presence of critters and other destructive animals as a result of an imbalanced ecosystem created by humans. Say in Oregon, there are too many deer, wild turkeys, gophers, voles, moles, ..  I bought this 2 acres of almost barren land in Oregon with 1 acre covered only by some low nondrought tolerant ornamental trees, ornamental shrubs, some roses, some mostly damaged (by gophers, voles, moles, previous owner's chemicals) low growing lawn grass and 1 acre of barren land covered only by ANNUAL rye grass cause the previous owner lent it to a grass grower.

Fukuoka's seed ball will not work cause there will be animals killing anything that is green. Even if they don't eat the green plants, they will dig up dirt to kill them. I have gophers that will kill grass after eating dandelions cause of the dirt they dig up. Moles will eat worms and insect larvae. But the dirt they dig up will kill almost all plants. Over 50% of the trees that I planted were killed by deer, voles, wild rabbits or drought. The reason why we have so many destructive animals is simple. We killed all the predators of these critters. So, in order to green the deserts, we need to reintroduced predators to the ecosystem. This is actually what is happening in some parts of America. They are introducing wolves and coyotes to areas that need to be reforested.
show more
6 months ago
permaculture design

masanobu fukuoka
"According to one article people measuring the two systems found the "organics" had better soil than the "no till" lot because the organics lot put so much effort into building up soils that they found more ways of doing it. So no till is not the only system that works."

Black Locust- Fast growing tree for rot resistant timber, beautiful flowers, and natural trellis!
Black locust flowers taste like sugar snap peas. I made black locust flowers, garlic scapes, scrambled eggs this year. I have 3 black locust trees that are about 4 years old. One was still only about 8 feet tall cause it was damaged by deer and a couple of droughts. My tallest one is over 15 feet tall. One of my acres was lent to a grass grower to grow annual rye grass by the previous owner of the property and was like a desert. I now have 3 black locusts, 1 big foot maple, a couple of evergreens, and some 3 year old and some 2 year old trees. The rest is pretty much annual rye grass that I allow it to self seed and a ton of crazy weeds. Some gophers are digging around like crazy eating all the crazy false dandelions. My goal is to replace everything with trees first. And it will be a 10 year project cause I can't water the entire 1 acre by hand during the hot dry summer. 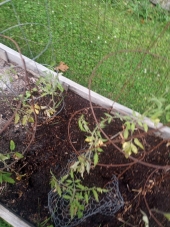 Plants are struggling, any suggestions?
Looks like you are using a lot of fine wood chips or something like that. Your tomatoes most likely lack nitrogen and even organic matter or minerals. Many difference kinds of wood, such as walnut and hickory, contain natural chemicals that will suppress tomato growth. And many other kinds of wood, such as black locust and cedar, take a seriously long period of time to decompose, like 7 to 15 years. Some youtubers claim to have successes in using wood chips in their gardens. They just got lucky or may be they have good soil to start with. LOL

You probably need to add some nitrogen to your tomato plants, say by adding some 1:10 diluted human urine or 1:10 diluted chicken manure to your raised bed. I suspect if you have a full bed of wood chips, you need to add some other minerals such as calcium too. Add some freshly cut grass clippings as mulch. They will release more nitrogen and other nutrients to your bed in the coming month or two.

I prepared my tomato bed by cutting the grass and weeds, then put them back to the same area. Then I added some freshly cut grass and some half composted tree leaves. In one bed I added some 90% decomposed straw bale as an experiment.  Then I added some egg shells and cured quail manure to each bed twice after I have planted the tomatoes. The two beds turns out pretty close in terms of growth, except for less sun exposure for one bed.

Dealing with fear aggression
I got my 2 year old extremely fear aggressive Aussie mix girl about 2.5 months ago. She barks at every moving or noisy object. She is even scared of my ceiling fan cause she was kept as a backyard dog for her entire life with no exposure to dogs or other humans. She fought my older mixed dog twice already. Most working dog breeds have serious fear aggression. They were bred to use their fear aggression to herd cattle. They will bark and bite until the cattle submit or they will keep biting. But working dogs are also bred to follow VERY strict commands/orders. But you have to be the BOSS of your flock. You have to let your dog know you are the BOSS and you are the protector of your entire flock.

I do not allow my dogs to stare at each other any more. They can look at each other, but they have to move on or I will yell at them. They have never ever had another fight again.

Start with leash control. Fear aggressive dogs are also out of control on leash. You have to punish/correct your dog if your dog keep pulling the leash. Leash is the STARTING point of your leadership. Of course, building trust is critical if you have a newly adopted dog. Reinforce your dog positively if he/she follows your command, punish/correct your dog if he/she doesn't not follow your command. A simple harsh verbal punishment or a yank of the leash is good enough. My Aussie girl was not potty trained. She has defecated and urinated on my carpets several times. I have to let her out to potty every 6 or sometimes even 4 hours. I willSge  put her into the bathroom if she doesn't potty because she keeps looking at the traffic (my property is in-between a highway and a road). She is getting better but she is inconsistent. You need to be very consistent. My Aussie girl is super stubborn. On a good day, she will not pull on the leash. On a bad day, she will keep pulling until I yank her many times. But you have to be consistent. She will learn eventually.

BTW, I don't believe in treats. I love my dogs and I share my food with them. I am building trust and leadership. And I am the very mean boss of my family/flock. LOL

show more
6 months ago
dogs and cats
Found a supply of cheap enough mulching material
I mulch my tomatoes, potatoes, vegetables, trees and shrubs ALL using the "moldy" hay. And I don't believe that's mold. It is some kind of fungus that specializes in decomposing dead grass. The cell wall of grass is beta-glucan, instead of cellulose. So, I believe this fungus is specialized in attacking beta-glucan. And it smells really nice when it is decomposing. Composting results in a significant lost in nitrogen!
show more
6 months ago
gardening for beginners 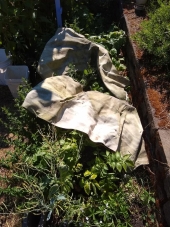 Adjusting to the heat
I have to cover my potatoes and even pumpkin plants with cloth and cardboard today. My pumpkin plants look really sad even at 10 am and I just watered them at 6:30 am. Today is the recording breaking day with 112F. The last record was 109F. It was 103F yesterday and my potatoes are starting to turn a bit yellow. I don't want to harvest them before July here in zone 8. The climate is not just turning hotter and dryer, but much more unpredictable. Say we had no rain and over 92F in April so all my butterhead lettuce started to bolt in April. We had not much rain in February and very very little snow this winter. Then it became cloudy for like 2 weeks with shower even in May and June when I just planted out my tomatoes. Many trees are dying here in the PNW. A couple of branches of one of the Douglas Fir tree in my neighbor's property just fell down for no obvious reason in June. I strongly believe the PNW will turn into a gigantic desert like the Sahara in less than 20 to 30 years if they continue to practice large scale industrial chemical farmings. Let's call it Amerihara. LOL
show more
6 months ago
meaningless drivel