Meat preservation on the labs
This is an independent experimental project on the labs, by violet and myself.

Our question is this: can we, using primarily existing resources on the labs, process large quantities of meat into a stable (non-frozen) state, without an excess of labor or outside materials?

The artifact that we are creating is set of racks that can be used as a dehydrator or smoker. We are making them much larger than any I've used before because cows are big.

As far as I understand modern jerky preparation, it is generally dried/smoked at 145-155 deg f to prevent bacterial growth. I would like to experiment with traditional methods, which I vaguely understand to use lower temperatures and result in a more stable product, but we are trying the simple version first. I would appreciate any input on our method.

We are trying a simple process - marinated and dry rub w/ salt, then drying at 150 deg f. We are building 7' x 3' frames because we want batch sizes around 100 lbs wet weight. We built the first frame today and stretched steel uncoated (no zinc) wire to support the meat, and are testing it right now using a little propane burner (Paul, this project is on our dime for fuel and materials. Just so you know.) We've covered the whole structure with a canvas dropcloth and thus far are surprised and happy with the temperature behavior - evenly distributed and nicely stable.

Wofati berm shape
Since I had a tough time understanding how the wofati 0.7 berm would be shaped before we came out, i thought people on the outside might appreciate this sketch for clarification. This isn't intended to accurately show the frame details, or the umbrella layers: 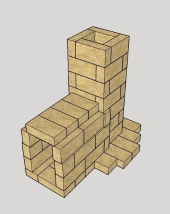 Emergency quick and small batchbox for the 400 sq ft wofati (0.7)
Max, that's about what I'm figuring I'm going to do to make this thing liveable. Unfortunately I am only paul's tenant so he'll have to approve it but I think it's a relatively sensible way to make the system liveable until and if it starts running better.

Peter, I agree. I believe the vertical stack was hovering around 65 f or higher, compared to 55 f ambient indoors. Unfortunately I wasn't paying attention while we burned all day yesterday what the temps were. Oddly we don't usually get smokeback failure even when the room warms.

Thanks again for the help. We're going to be away from the system for the next two weeks so I'll update upon our return.
show more
6 years ago
rocket mass heaters

I finally had a few minutes to catch up on your last few replies:

Yes, we did try priming the vertical interior stack w paper and yes, it did result in a wet wad of charred paper. Also it doesn't help with our failure mode now because nothing can burn in the oxygen poor flue gas.

Peter, you correctly predicted that smokeback resumes about 15min after we turn off puff the magic vacuum. However, I've found in the last two days that I can cheat with the vacuum for 2min whenever it smokes, and I'll need to do that maybe three times before the system is warm enough to run the rest of the day.

I'm currently trying my best to dry the mass by keeping heat constantly. I don't feel very optimistic about this since the flue gas seems to enter the mass at about 60deg f.

We have orders from the big stink to reinsulate the walls so we're working on that next. The theory is that it will address the competing thermosiphon through the leaky walls.
show more
6 years ago
rocket mass heaters

Suffering on the labs
Actually yes, we save it for out very best friends though.
show more
6 years ago
wheaton laboratories

Emergency quick and small batchbox for the 400 sq ft wofati (0.7)
Some data. We tried a burn while heating the vertical flue to aid flow.

Began with 10 min preheat of the pipe while burning paper and cardboard, weed burner on the pipe.

26 min, we opened the door and got a bad flameout into the room

41 min, smoke outside is still heavy and brown

I'd like to call your attention in particular to the extreme differential in the 24" between manifold and floor entry. Tim and i think the low flue temperature there is significant. 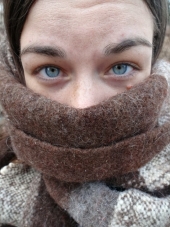 Emergency quick and small batchbox for the 400 sq ft wofati (0.7)
We have started having a severe smokeback issue.

I don't know what's relevant, but on wednesday, we went to 12 hr intervals between loads instead of 2 hrs, and also added the last of the insulated pipe and cap outside. On friday we started having more smoke push out the pipe joints. This continued through the weekend but the stove was useable. Sunday night, we primed as usual with small pieces of paper and cardboard in the riser, then let a few pieces of kindling burn down, then kindling and two pieces of wood, then a full load (leaving three inches at the front and top.) This burned cleanly for ten minutes with all the wood in the box ignited. Suddenly the p channel started belching smoke, followed by every possible gap. We pulled the caps and inspected for blockages, and removed a wad of paper. Waited until the next night and got the same behavior.

Yesterday i piped up a bypass to omit the ground loop and the stove ran with no major issues, although it seemed cooler and dirtier than i expected. No temps, sorry.

Last night we tried the same startup with a cleanout outside on the last vertical uncapped, and got the same behavior, except that during failure mode, smoke poured heavily out the open cleanout.

At paul's suggestion, this morning we tried opening the building door as soon as it started smoking, and it was no better.

Would appreciate any suggestions. I'm just learning about these beasts and I'm not sure what to try next.
show more
6 years ago
rocket mass heaters