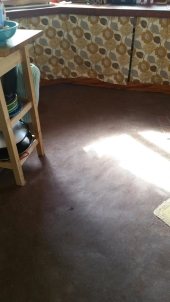 Here's a picture of the earthen floor in our earthship, just after first coat of oil, nine years ago! Still very happy with the result.
More pics on our website http://es-cargo.qc.ca/ and FB https://www.facebook.com/ESCargoQc 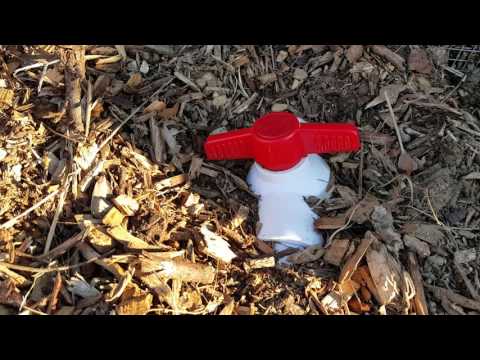 how do i keep my chicken water from freezing with no electricity?
We are Zone 3 and often get -30C, our hens are in an unheated greenhouse all winter.
Being off-grid, we can't heat the water so we bring in a full bucket of warm water in the morning.
When it gets really cold, I make sure to shovel a pile fresh snow in there to make sure they can drink... Yes, they drink snow! A neighbour keeps his chickens in an outdoor pen, covered with tarps on top and 3 sides, he doesn't give them ANY water, just snow!
show more
6 years ago
chickens

Chickens just stay in coop most of the winter (Michigan)
Looks like I'm the coldest of the bunch here! I'm in the Northern Laurentians with -30 regularly
My chickens don't go out in the winter. They do like to gather by the door when it's open, just curious, but not tempted!

We transfer them into our unheated greenhouse for the winter where they have plenty of room, dust bath galore and deep litter under the perches (6-8 in.)
Being off-grid, we can't heat the water so we bring in a full bucket of warm water in the morning. When it gets really cold, I make sure to shovel a pile fresh snow in there to make sure they can drink... Yes, they drink snow! A neighbour keeps his chickens in an outdoor pen, covered with tarps on top and 3 sides, he doesn't give them ANY water, just snow!

And by the way, on the shortest day of the year, not quite 8 hours long, we got 9 eggs from the 9 ladies! And they kept that up all winter, 8 eggs most days. I think our secret is giving them a couple of cups of sprouted grains everyday.

You're talking about my earthship I see

www.es-cargo.qc.ca
We're entering our 10th winter and looking forward to the white season!

We're already in the below freezing temperatures at night. Actually, the first frost is at the end of September where we live.

We do use about 4 cords of "crappy" wood a year in our Rocket Stove/mass heater (we use it both for heating and cooking).. Are you jealous yet?

I found out that theory and practice are 2 very different things, probably because so many variables need to be accounted for, that it makes it almost impossible not to miss something.

Too much mass is just as bad as not enough. In the first case, you might end up having to blast your Rocket for 2-3 days to get back to tolerable temperatures after being away a few days... Earthships have HUGE windows where you lose a LOT of heat. In the second case, everyone knows you overheat!

That said, we still love our home and have found a few tricks to alleviate the problems we discovered along the way, as you can see in the vimeo.

... and going the the composting outhouse in winter is NOT a problem. Try it before you give your comments, please?

I understand what you're saying as I live in a ground connected Earthship in Quebec, with no AGS. The floor temps are around 11C and we still manage to burn less wood than all our neighbors thanks to our rocket mass heater.

I've been thinking of doing an insulated mass underneath a house and heating it with an AGS. Lots of experiments to do still

Helene
show more
8 years ago
natural building
AGS system performance
Hello Chris,
First, let me congratulate you on your new kickstarter project, I can't wait to see the result. It will help a lot of people.

I've been interested in AGS (annualized geo-solar) for many years, I've exchanged e-mail with Don Stephens the originator of the concept
I'm considering using a modified version to help warm up the base of our earthship's walls this spring and we didn't install one when we built, but that's another story!

I have a question about the Kinark Outdoor Centre. (http://endeavourcentre.org/our-portfolio/kinark-sustainable-living-centre/)
I can't find any performance reports on their AGS. I see in the pictures that there are sensors in place to monitor the temps. Is there any data available? What is your experience with AGS?
I don't see it in any of your more recent projects...

You have given me courage, ideas and support, more than I could have hoped for. All your suggestions have fed my own brainstorming blizzard and things are getting so much clearer.

I entertained the idea of having a couple of piglets do the job, but the timing and the effort of setting up a paddock are not worth it at such short notice. Turns out I'd have to get an excavator come in to dig a trench to set up the fence, so I might as well just get it to clear the place up and be done with it. We have so many other plans for next summer : 6 weeks of workshops, completing the passive solar greenhouse plus bees and chickens!

I hear you Zach about government subsidies and not bending to their crooked ways; but in this case, for once I can fit MY vision into their limits by stretching that limit

Everything I've done so far has been more like flying solo into the unknown, it's kinda nice to have company.

You're all welcome to visit my little paradise to find out how we survive in freekingly freezing temps half the year! Thanks again for reminding me how lucky I am.
show more
8 years ago
sepp holzer

I finally decided to get in on this KS at the last minute... let me explain, I did support you in the other 2.... but ... (I don't want to sound too critical, I know how thin skinned you can be

)... I'm very much into RMH, we've been doing workshops about them here for a few years in Quebec, where they're very useful

Our Rocket is our only heat source aside from the sun... but... I was disappointed by the RMH videos. So far I've not been able to finish listening to them because the noisy background strains my hearing and listening enjoyment. So, I was a bit worried about this new set of videos although I'm VERY interested by the subject!

To soften my criticism, let me praise you on the permaculture playing cards, they are wonderful, lovely, magnificent! Even if Geoff Lawton and others are somewhat reticent about putting something forward as an ace instead of an 8, or a jack instead of a king, to me that is quite insignificant. The product is good quality, lots of info and well worth it... I'll be giving some away during the classes we're planning next summer, I'm sure they'll be fighting over them!

LN
show more
8 years ago
tinkering with this site
Food forest in a forest
Thank you both for the good comments!
I understand how difficult it is to get a picture from just a few words... and it's a very nice place indeed, we call it paradise.
You can see pictures here : http://es-cargo.qc.ca/commun/photos-1ere-annee.html

Yes, I'm very aware of the value of the species already in place, but as I said, most of the mature trees that are still standing are in bad shape. The birch are all dying because of an exotic bug and no Chaga found yet. Most of those trees are only about 10-15 years, mostly white birch. Chaga is found mainly on yellow birch in our region. The chokecherries are the Prunus pensylvanica and all have that ?black fungus? disease (I know only the French name...) I'm replacing them with Prunus virginiana that are doing much better... and the fruits are also sweeter... they make great wine

The idea is to take advantage of the government subsidy to add more diversity. I've been observing this land for almost 10 years, I've made Excel sheets with all the species I could identify and noted all their uses and value with the help of Dave Jacke's "Edible Forest Garden" to name one reference... lots of thought and observation... that's my favorite pastime. I spend at least half an hour every day walking around, looking at stuff.

We'll be doing some earthworks in the steep section (I should have said 40%, not 20%), but mostly around the selected area for this program because it's an area where we've already started terracing by hand and planting a few fruit trees to see what will survive... it's not such a large area so we cut some of the shrub and regrowth and put it on the downside of the hill as we go. I know I've been a bit shy about considering large scale earthworks, mainly because until last year, I thought the forest was healthy.

There's a lot of water on the land, almost too much! We can't use the river except for swimming, but that's OK. We have 2 springs high on the hill that will be used to create ponds starting at the keyline and zigzaging on the terraces on the way down. The hill itself is quite dry because of the nature of the soil (rocky sand on silt) so we have to work on that. At the bottom where I am worried about the regrowth, it's already an almost marshy area, especially in the spring. That's where we want to add Haskap because they don't mind the wet conditions. We're also trying to get more food protein with hazelnuts and chesnuts, we don't really enjoy munching on tree bark all winter (6 months)

I like the carpet idea, but it's a large area to cover all at once and the stumps will be too numerous to make it feasible I'm afraid. We won't be able to walk in there. It's all mostly young trees, a lot of balsam fir and trembling aspen. I'm wondering if it would make sense to go in there with an excavator? I'd like to remove the stumps somehow...

Thanks again for any input,
LN

First time posting a question, but I've been watching in the background for a long time!
I own 15 acres of forest in Quebec, 70 miles North of Montreal, very cold (-35C many nights in a row), mostly on a steep slope (20-25%) facing South, bordered by a small river. The forest was clear cut 80 years ago, left to fend for itself and 12years ago, all the best trees were cut. They left a lot of trees but mostly diseased or mangled. There's also a very diverse regrowth of fir, chokecherries, raspberries, sugar maple, eastern cedar, birch, tamarack, beech, speckled alder....

We are enrolled in a subsidy program to establish trial food forests next spring.

2 different zones will be created, one on the hill and the other on the flatter area at the bottom of the hill.
The preparation they've recommended is cutting the existing trees and regrowth and turning it into chipped wood to be used as mulch. I'm worried about competition from the pioneer species and the coppicing that will regrow from the stumps left behind. The hill section should be OK because we will be introducing mostly nut and fruit trees 5-6 feet tall. The bottom section is more problematic, we're going with shrubs like Viburnum, Haskap, elderberries and blueberries.
Do you have any suggestions or opinions that could help PLEASE!
show more
8 years ago
sepp holzer