Convert wood stove to rocket bell (& mass) heater, simply
Thank you for the helpful comments, folks. I sealed the hole at the bottom of the chimney, and that seems to have caused a noticeable increase in the draft. We've tried burning it hot today, and haven't had any trouble with smokeback yet. Maybe that will be all we needed to do!

I don't know how to tell whether the superwool is forming a good enough seal in the gap where the doors used to be. I'll try holding a lit match near it to see if there's any air movement toward the seal.

I haven't tried raising the plunger tube yet; as I said above, maybe I won't have to.
show more
7 years ago
rocket mass heaters

Glenn Herbert wrote:I had the feeling space limitations were pretty strict, which is why I suggested a masonry bell instead of the long cob bench.

Ok, I see. I thought you meant a "bell" made out of a metal barrel.

So to answer your question, I don't plan on building a masonry bell just yet. I've got to solve the smoke problem first, then would need to decide how much floor reinforcing would be needed and how much I'd want to do, plan and price masonry work for a bell (which might be beyond my abilities).

Regarding building permits, I'm hoping my current modifications would not require a building permit, since they are easily reversible. But my biggest concern of that sort is to get the design to a point where it will not be a fire hazard, and can satisfy my homeowner's insurance agent. I believe to do so I'd need more tile in front of and around the feed tube to catch any sparks.
show more
7 years ago
rocket mass heaters

Convert wood stove to rocket bell (& mass) heater, simply
This might be what I need to try: https://permies.com/forums/posts/list/32099#253850 A heat pipe. Maybe copper tubing wrapped around the metal rods to cool the wood above the top of the feed tube, then run into a metal bucket to siphon the water through the copper tubing. (Note that would not be a sealed system since I don't want an explosion!) Not sure if that would siphon correctly, though.

Here's why this might solve the problem. The smoke only rises out of the feed tube area when the flames burn up on the wood higher than the top of the feed tube. Part of the reason the flames get that high is because the upper parts of the wood get hot, because the feed tube emits so much radiant heat. I doubt the copper pipe could combat the radiant heat, but it might be able to keep the wood cool some via convection and conduction. Another part of the reason the tops of the wood burn is that flames (still pointing downward because of the draft) slowly creep up the sharp edges of the wood. Maybe the copper pipe could stop some of that from happening, if it could cool the flames by contact with the flames.

I think the aluminum foil reflects too much heat back onto the wood, making it easier for it to burn higher up and so put smoke in the house. I'm not sure what to do about that yet. Maybe instead of aluminum foil I should use a steel box, and wrap that with the copper tubing.
show more
7 years ago
rocket mass heaters

Glenn Herbert wrote:Having gone through this trial, do you anticipate trying to further tweak this stove, or building a standard type RMH with bell for next winter?

Presently I plan to continue to tweak the stove, but the smoke is making me consider just taking the J-tube out and using the stove as a regular wood stove again. I don't want to put in a standard RMH because I don't have space for a big bench next to the existing chimney, a permit could be hard to get, and it would take a lot of work to reinforce the floor. So for now I'll see if I can do something to increase the draft.


Glenn Herbert wrote:(How sturdy is the floor under the stove? Can you reinforce the supports if needed?)

I could, but it would mean building a 4 foot tall platform off the dirt floor under the joists (and subfloor, hardwood floor, and floor tiles). For now that's not worth the effort for me. In other words, I'm not up to doing stage 3 of this project yet.

Convert wood stove to rocket bell (& mass) heater, simply
Help! It puts too much smoke in the house. What can I do to fix this?

Here are my attempts so far:

1. To try to fix this problem, I first put a short section of stovepipe around the vertical metal rods which keep the pieces of wood upright in the feed tube. You can see this short section in the pictures with the kids. This worked fairly well; it prevented most of the smoke from coming into the house. But we get smoke when the wood heats up enough to either:

2. So I thought maybe the problem was that the cross-sectional area of the short piece of stovepipe is greater than the cross-sectional area of the burn tube itself. So I removed the short piece of stovepipe, and tried wrapping the vertical metal rods with aluminum foil to make the cross-sectional area about the same to a height greater than that of the pieces of wood, in the hope that would channel all the smoke downward and prevent any smoke from coming upward. The result was that smoke still came out of the feed tube, partly because the wood stove's fan blows air through the wide horizontal vent directly onto the top of the aluminum foil. So I covered part of that vent with a piece of black-painted sheet metal, which stopped the fan from blowing smoke out of the feed tube. But I still get occasional wisps of smoke and sometimes a continuous feed of a little bit of smoke coming out of the feed tube.

It makes us and our house smell like we smoke cigarettes, and hurts my throat just a bit. It's too much smoke. I think what I need to do is increase the draft.

Here's what I can try next:

3. Wrap and tape aluminum foil or something around the bottom of the external chimney, where it has rusted through around the creosote cleanout door. This might improve the draft, because the hole probably lets cold outside air get pulled up into the hot air which vents out through the top half of the chimney, and the resulting mixture of cold and hot air has less pulling power as a result of its lower temperature, and the fact that it can pull air not only out of the stove, but also out of the hole at the bottom of the chimney. If you look really closely at the picture above, you might be able to see that there's a hole in it. That hole has since gotten bigger.

4. I can try raising the height of the bottom of the plunger tube. It's currently about 4.5 inches off the bottom of stove's floor. Raising it from its original 2 inches or so to its current 4 inches increased the draft, so maybe raising it more would increase the draft further.

What do you think?

P.S. One more "pro" to add to the list in the previous post (which it seems I can't edit anymore) is that the bell does appear to be helping keep some more heat in the house than the stove's original (non-rocket) configuration did, because the bell gets hotter at the top than at the bottom, and the stovepipe above the stove no longer gets as hot as it used to, nor is it as hot as the top of the bell.
show more
7 years ago
rocket mass heaters


Here are some pictures of what it looks like: 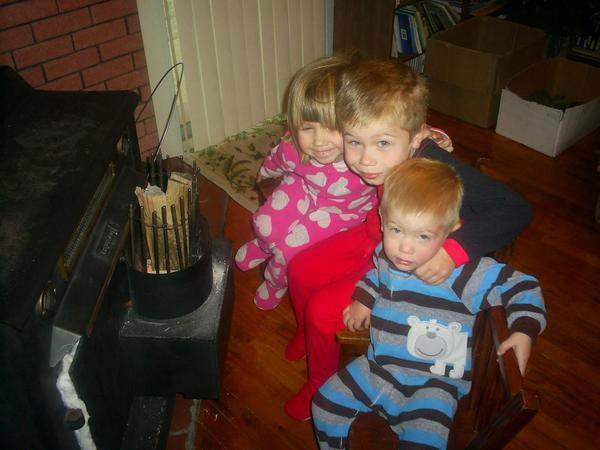 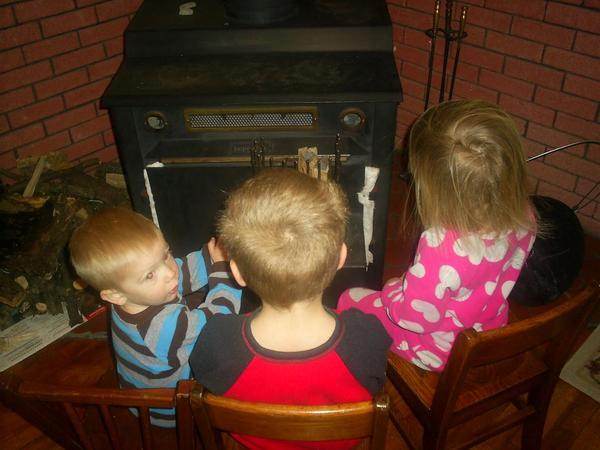 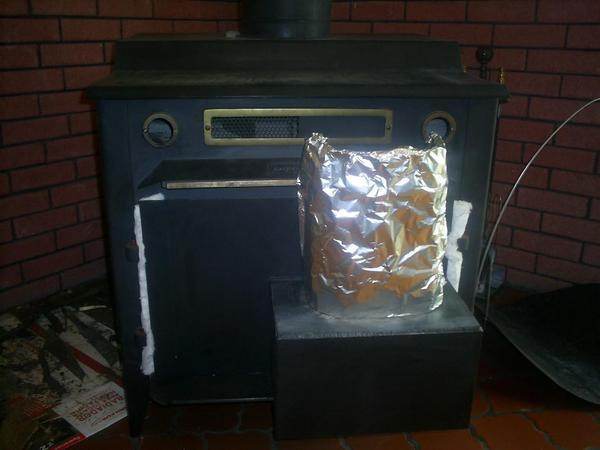 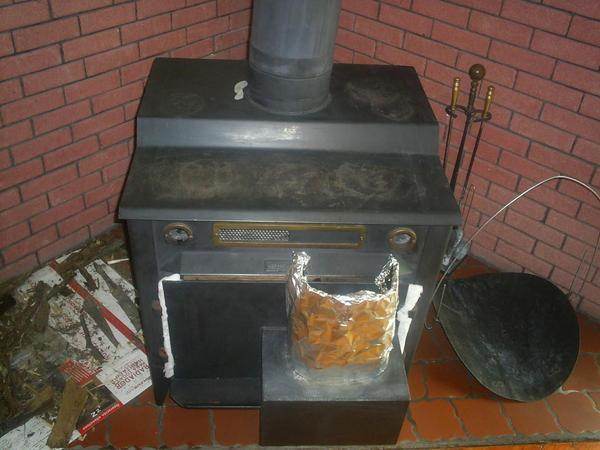 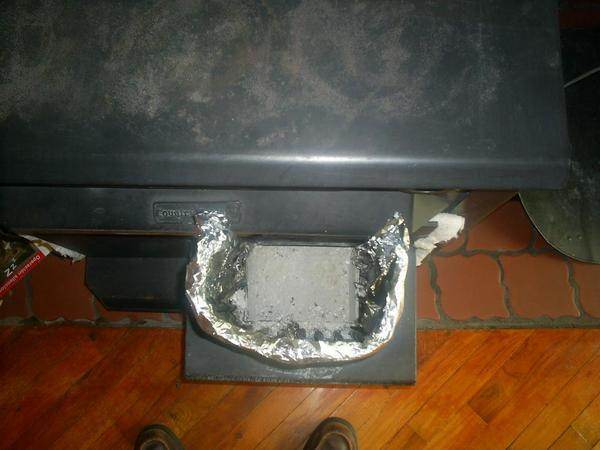 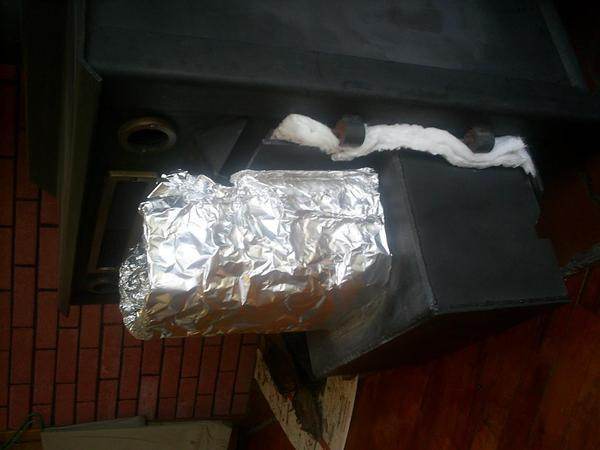 ronald bush wrote:wouldnt it be easier to add fire bricks inside the fire box, to act as thermal battery?

That would probably be easier, but I'm trying to capture some heat in a bell in stage 1, then add mass in stage 3, as described in my original post above at https://permies.com/forums/posts/list/40546#315689.


ronald bush wrote:maybe stack bricks on top of the stove for additional thermal mass. or even bricks stacked behind the stove against the wall.


ronald bush wrote:where are you collecting the heat from with this insulated insert?

In the bell, which is made of steel and has an air channel outside which a fan blows air through to convect heat into the rest of the house. That's just stages 1-2, though. Stage 3 would collect heat in soapstone placed around the outside of the first and second bells.


ronald bush wrote:it seems that just setting that in your stove would only super heat the flue.

Maybe, unless the bell works to keep the hottest gases from going out the flue.
show more
7 years ago
rocket mass heaters

Convert wood stove to rocket bell (& mass) heater, simply
I'm afraid people might be confusing themselves with this thread. To help clear up that confusion a little, let it be known that this thread contains three heater designs, which are not the same, and I'm only attempting to construct the first of these designs: 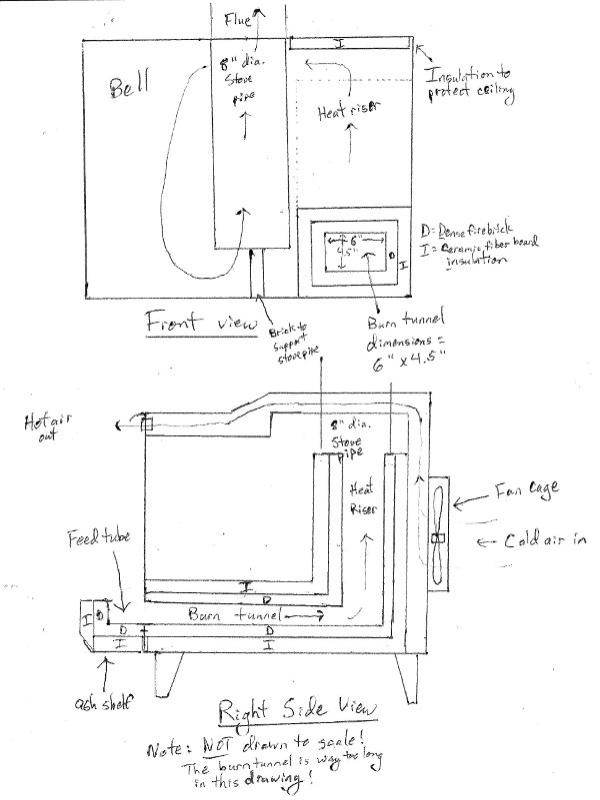 Convert wood stove to rocket bell (& mass) heater, simply
After my test burn, the fire went out. The bricks were still hot. So I put some more relatively thick pieces of wood in and didn't try to light them. When I came back 3 hours later they had completely burned up, except for one unburnt end which fell to the side so didn't burn. That's 'cool' that the bricks retained enough heat to light the new fuel like that; gives me some hope the system will work.
show more
7 years ago
rocket mass heaters