Dietary sources of vitamin D for temperate regions?
UV exposed mealworms have a vitamin D content similar to salmon by weight.  Not the most appetizing of foods, but easy to manage.
show more
4 days ago
food choices 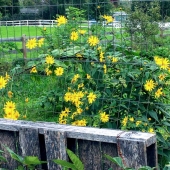 Sun Chokes are Bulletproof: but what else?
They are very easy to grow, assuming the right climate, but when you take into account the low calories and the problems many people have eating them regularly or in larger amounts, it takes away a bit of the shine.  That's a lot of digestive distress per calorie for many people.  They can be a wonderfully care-free emergency reserve of almost food though.  Skirret and tartar bread plant are two tough root crops that tend to be about as hardy as sunchokes under similar conditions.
show more
4 days ago
plants

Potatoes in raised beds: with companions or alone?
That video was pretty good.  I give it 4/5.  The main thing he didn't get quite right is the relationship between seed piece size and yield.  This has been studied extensively.  You want seed tubers that are about two ounces.  This translates on average into a plant that forms three stems.  This gives the best compromise between tuber size and total yield, although there is a little room to optimize this depending on variety.  Larger pieces will form more stems and therefore more but smaller tubers and a lower yield.  Smaller pieces will form fewer stems and therefore fewer but larger tubers and a lower yield.  Each stem will form a certain number of stolons, each of which will usually produce one tuber (more than one in some varieties), so the more stems you have, the more tubers, but all of those tubers will be competing for resources.  People often think that cutting is a way of economizing on seed potato purchase, and it is, but it is moreso means to optimize yield.
show more
4 days ago
polyculture

Potatoes in raised beds: with companions or alone?
This has been studied a lot and here is the conclusion that is invariably reached: hilling increases the marketable yield but not the total yield.  That means that the main function of hilling is to protect the tubers from sunlight and pests.  You get the same amount of tubers, but because they are covered by soil, they are in better condition.  But this also means that you don't get any benefit from hilling much more than just over the maximum diameter of the tubers.
show more
4 days ago
polyculture

Potatoes in raised beds: with companions or alone?
Yeah, this is basically just a slightly modified version of the potato tower idea.  The plants just don't grow that way, unfortunately.  There is no point in hilling up beyond about six inches.  What is depicted will not happen.  The tubers will only form just above the level of the seed piece.  And they are putting too many seed potatoes in a container, which is generally going to mean smaller tubers.

It is amazing that there is so much material that shows how to grow potatoes this way.  The information battle has been lost.
show more
4 days ago
polyculture

Potatoes in raised beds: with companions or alone?
The sprouts aren't a problem, other than that they are fragile.  If you are planting by hand, no big deal.  You can also just trim them back, but be aware that if you use the same cutting tool on different potatoes without sterilizing, that is an excellent way to spread disease.

When a potato has many long sprouts, that is an indication of increased physiological age.  The first sign that tuber aging is becoming a problem is when they start to develop sprouts all over the tuber, rather than just at the distal/rose end.  This indicates a loss of apical dominance, which is the first sign of hormonal changes due to tuber age.  Plants grown from tubers with increased physiological age tend not to yield as well and also produce more small tubers due to the increased number of stems.  The difference may not be so much that you notice, but it is generally something that you want to avoid.  If you often have long sprouts on your potatoes by planting time, it would be a good idea to find a way to store them colder.

The mother tuber only lasts a year, so there is no point in replanting it.  They do sometimes remain in very good condition, but they won't grow again.
show more
5 days ago
polyculture

Potatoes in raised beds: with companions or alone?
If you want to grow something alongside potatoes, it should generally be something that gets harvested first, does not have an extensive root system, and doesn't require richer or more alkaline soil than potatoes.  I tuck in lettuce and small greens around potatoes.  The potatoes are going to form large canopies, so plants that need maximum sunlight are going to get shaded out and plants that can compete with the potatoes are going to shade them out.  I don't care if my lettuce doesn't get optimum conditions because I just grow more to compensate.
show more
6 days ago
polyculture
Dropped my seedlings :(
Most of them will probably be fine.  I do this at least once a year, usually more.
show more
6 days ago
plants

Potato mountain.
You are also likely to have problems giving potatoes such a huge amount of organic matter.  Potatoes evolved in relatively poor soils.  When organic matter is high, you tend to get fungal and bacterial problems.
show more
1 week ago
plants 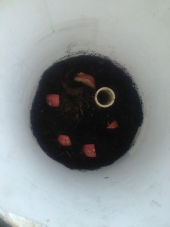 I want to grow potatoes....
Roots and stolons form on each sprout.  So the sprouts grow upward, sending roots downward and stolons out laterally.  Because of that, the tubers will always be at or just above the level of the seed piece, unless the stolons run into an obstacle that redirects them.
show more
1 week ago
gardening for beginners