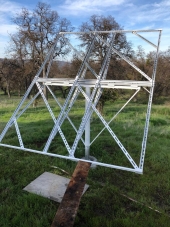 What's the practical capacity of a 100Ah, 12v deep cycle battery?
Hopefully I'm overly pessimistic but I think only 20% or 20Ah.

As you can see, that's really not that much.  That's why serious off-grid systems are better at  24 and 48V, and why much larger Ah batteries are usually selected.  With my system, my large 24V battery in general doesn't get depleted more than 20% a night, which more than doubles the longevity of the battery.

Eric Hanson wrote:
These are some impressive battery figures.  This is a lot better figures than my plans call for so I am definitely impressed/intrigued.

What type of battery chemistry are you using?  It does not seem like lead-acid or lithium-ion. I am not certain what type of cell can give you 4 volts so I am definitely interested.


Sure, they are flooded lead-acid.  I have both Trojan and Rolls, but plan on upgrading the cabin to this 4V Rolls battery.  I will need twelve of them to make a 48V bank.
https://www.rollsbattery.com/battery/4-cs-17p/
Rolls makes batteries in 2,4,6,8, 12, and 32V lead-acid batteries.
Trojan makes 2, 6, and 12V lead-acid batteries.
show more
3 weeks ago
solar 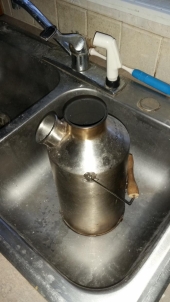 Off-grid ways to quickly boil water and heat up food? Will an induction hotplate work?
Why don't you like gas?  If it's the expense of 1lb bottles, there's a solution for that which I did myself.  For years my cabin's kitchen stove was a little propane camping stove.  I replaced the 1lb bottle connection with a 5gal connector like this.  So, you can run a gas stove off a 5 gallon bareque tank which is far cheaper to refill.
https://www.walmart.com/ip/Gas-One-Propane-Hose-Adapter-1lb-to-20-lb-converter-4ft/346322711
It would last months for me.
show more
3 weeks ago
solar

That looks like a pretty nice 1Kw solar setup.  I am just curious, what does your battery setup look like?  Are they 12 volt batteries wired in series?  What kind of amp hours are you getting.  I am playing around with the idea of making a backup system, but nothing like what you are describing.  Basically I am just looking for ideas.


Hello Eric, I actually have two systems, my 48V cabin system, and my 24V workshop system.  For the cabin, I have eight 6V Trojan L-16 batteries, 377Ah, for 18kWh of storage.  The workshop has three 8V Rolls batteries with 568Ah of storage, for a total of 13.6kWh.  I like the Trojans, but I really, really like the Rolls.  The problem with them though is that they weigh about 300lb each, and two grown men can barely lift them.

Rolls however, makes a 4V version of the same battery, which is what I want to upgrade my cabin to.  They only weigh ~150lbs, so one grown man (me) could lift them.  Twelve of them in series is going to give me 27kWh of storage.  That will let me run the air-conditioner 24/7 in the hottest part of the summer.

Glad you like the array!  I'm very proud of it.  Funny thing is, now that solar panels are getting so cheap, I payed more for the steel to build the array then what I paid for the panels themselves.
show more
1 month ago
solar

12v vs 24v
My very first system was 12VDC to 120VAC.  It worked, sort of.  I could see lights dimming occasionally, here and there.  I didn't try to run more than a few lights and a TV for an hour or so.  I then graduated to a 48V system.  OMG, what a difference!  My new system can power my 240VAC well-pump, a cement mixer, and a big circular saw, all at the same time.  This is a totally off-grid system, not a grid-tie.  I will never again even touch anything 12V again.

Once you leave 12V and enter the realm of 24-48VDC you get into the serious whole-house electronics who's capabilities far out-match anything 12V is designed to do.  I'm talking about stuff an electrical code inspector would sign off on.  These are in the arena where inverters don't even have NEMA plugs;  they are designed to be hard-wired directly into your cabin's main electrical panel.

I now have a 1hp 240VAC well-pump, a standard refrigerator/freezer, air-conditioning, and all the extras you'd expect in a normal home, all running totally off-grid on solar only.  For years now!

My advice is not to invest 1 penny into anything 12V, not even 12V solar panels.  The key to getting inexpensive solar is to buy locally, and bypass 12V completely.  Locally, I can get 1000W of high-voltage grid-tie panels for 220$/kW.  This is at a cash and carry place in a nearby town.  It's shipping that's the killer with solar panels.  Even when they say "free shipping" the expense of shipping is baked into the price.  Buy locally, and you will save big.  What you really want to pay good money for is the electronics.  Newer MPPT controllers and Sine-Wave inverters beat the pants off of stuff made just a few years ago.

I mount my panels on single-pole ground-mount arrays, that can be rotated to track the sun.  They are non-motorized, so I have to go out and turn them by hand.  I call it hillbilly solar tracking.  It works!  I can increase the daily output of a 1kW array by 50% by just rotating the arrary about 3 times per day.  Here are pics of some of my arrays.

show more
1 month ago
solar
Adding 200W 18V Panels to my Th!nk EV ~ needs a boost!
How much did you pay for those 100W panels?  What I've discovered is you get far, far better deals with newer grid-tie panels.  Earlier this year I was buying panels in 1000W groups for about 220$.  These purchases were from local Craigslist sellers.  I ended up buying panels for both myself and the neighbors using solar.  The key to getting good deals in solar is to buy local, with local pickup, so you skip shipping charges.  The shipping on some panels is higher than the panels themselves.

As Brian says though, if you don't know much about electricity, you're better off sticking with off-the-shelf parts.  Magnum, Outback, and Schneider all make standard 120/240VAC split-phase inverters designed to be whole-house wired.  That means the inverter is connected directly to the house panel rather than having plugs you plug into.

It's all doable, with the right design.  Just don't run off half-cocked and start buying random stuff just because it looks good.  Design first, purchase second.
show more
3 months ago
transportation
Planning solar array for home and yard
My new system has been online for three years now, and I produce about 20kwh a day on days I'm pumping well water.  Keep in mind that I say 20kwh, because that's what I actually use.  It's likely that it "could" produce 25+kwh, but I've never yet actually consumed that much power.

My system consists of eight Trojan L-16 batteries wired for 48V, a Schneider XW6848 inverter, Midnight200 charge controller, and 15 300W grid-tie panels, wired in a 3S5P configuration.  The solar arrays are single-pole ground mounts made of welded unistruts.  They can be rotated by hand (hillbilly solar tracking) east and west to track the sun over the course of the day.  With this system, I can power my 2000W wellpump from about 8am till 4pm.

It powers the well pump, the kitchen refrigerator (standard 120VAC) and all the usual home appliances.  The system performs so well, that I'm shortly adding an air-conditioner.  During the night, I restrict myself to just lights and TV, and can wake up in the morning to batteries still at 90% charge.  That most likely will go down once I start running the air con.

The key to good solar utilization is to plan your activities around when output is highest.  You want to wash clothes?  Sure, but wait till after 9am.  Want to use the toaster oven?  OK, but just at noon.  Don't make toast at 9pm for a late-night snack.  What you will find is once you are making the power yourself, you'll become far more conservative in your power use.  I get out of the cabin before sunrise to go to the utilities room to monitor the incoming watts in the charge controller.  Watching that is better than television.

As the first responder said, panels are now the cheapest component.  I can now get a kw of panels for 220$ from a local Craigslist seller.  Don't buy panels through the mail.  Shipping costs as much, or more then the panels themselves.  Batteries even more so.  Buy name-brand components from an established company.  There are many fake products being sold on ebay and Amazon that lie about capabilities.  They'll slap a "MPPT" label on a cheapo PWM controller and make you think you're getting a good deal.  You aren't.  Still with name-brands and you'll be OK.  Buy products with names like Schneider, Midnight, Outback, Magnum, and MorningStar.
show more
4 months ago
solar 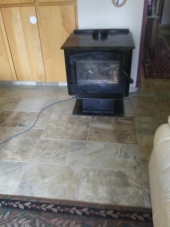 Napoleon Wood Stove identification
Do you have a chimney pipe already installed?  People talk about the fantastic deals they got on a cheap stove till they find out the price of installing them to code with proper chimney pipe.  That might run 2-3X the cost of the stove.

Are you going to do the install yourself?  Are you insured?  Will the insurance company OK a stove install, and would they require an inspector?

I've already installed two chimney systems and I can tell you it's for sure a DIYer job, but it takes about two days for two adults to install a proper chimney.  Here's a link to a great company that I bought my stove pipe and chimney pipe from.  They will have everything you need to do a proper and safe install.
https://www.northlineexpress.com/

Battery charging
In general, lithium batteries are always charged with what is called a "Battery Management System" or "BMS" for short.  That's because lithium batteries need to be charged very, very carefully under strict control.  Otherwise, some can rupture, catch of fire, and have killed people!  Airplanes have crashed because of lithium battery fires.  I suspect that third connection is for monitoring the charge being given.  Don't just try to jumper some 12V charger wires to it and expect it to work properly.

Please don't try to actually use/charge this battery until you've contacted the manufacturer to find out exactly HOW this battery should be charged.
show more
5 months ago
alternative energy 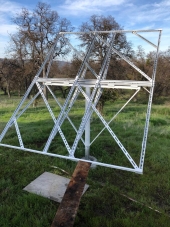 Added 2000W this last week
Finally finished my 4th generation solar array frame, which was assembled last weekend, the panels mounted and are now producing power.  The homestead cabin now has 5500W of power, the workshop 2000.  Each got a 1000W array as described below.

I re-designed my solar frames to be modular, allowing for easier on-site assembly. They're divided into two halves, the lower "T" module, and the upper "double H" module.

The lower T module sits on a 8 foot long 3.5" steel pipe sunk in concrete. Five feet is sticking out of the concrete. The "T module" can rotate left and right for daily sun tracking.

This array is designed to mount panels in two different orientations, four panels vertically, or six panels horizontally. Since my standard array voltage is 120VDC, I wired 4 panels in series. Someone else though could use this design with 6, wired in a 3S2P configuration.
show more
8 months ago
solar