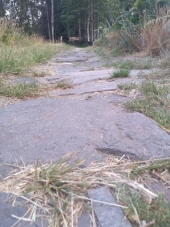 brick path without sand base?
I'm not sure if this is the right subforum for this question.

I'm laying brick paths for my garden. I was lucky enough to get dump truck loads of free used brick, and they make great paths. The problem is that the sand for the base is not free, and is environmentally destructive.

Has anyone tried laying pavers with just the local soil, without a sand or gravel base? How did it work out? Is this possible?
show more
1 week ago
stone work
A green roof—on the ground?
Hi Jay, yes, weeding gravel can be terrible! It is billed as low maintenance, and it is—for the first few years. After that, it becomes higher and higher maintenance over time.

Of course, having desirable plants in the gravel will in one sense make weeding more difficult. On the other hand, right now any weed throughout the whole desolate expanse stands out like a sore thumb. With a "garden" in place, there will be something else to draw people's attention. And it will make it easier to get motivated to weed.

I'll try to keep this updated. I'm rooting a bunch of sedum cuttings now.
show more
1 week ago
plants
A green roof—on the ground?
We're in a hot, dry climate (Denver, CO) and we have inherited a large swath of gravel landscaping. It is pretty boring, just one kind of red rock. It is also showing its age. The underlying plastic has got punctured here and there, and in some spots has bubbled up to the surface. Organic matter has accumulated within the gravel, and supports the growth of weeds. The weeds are usually pretty easy to pull, but it is time-consuming and boring. It is right along the street, and faces south and west; it is the first area where snow melts in the yard.

For many years, I've planned to remove the plastic, move the gravel into more aesthetically appealing, smaller swatches, and create a cactus garden. However, as anyone who has ever done this knows, moving gravel is backbreaking work. Also, I removed one small patch only to have perennial weeds take over the uncovered soil.

I've recently realized, however, that this mix of a few inches of gravel and organic matter over a plastic membrane is very much like a green roof, just sitting on the ground. If I planted sedums, ice plant, prickly pears, and similar plants, would they do as well as they do on a green roof? I've actually noticed that some annuals like growing in gravel; it allows rainfall to quickly infiltrate and keeps evaporation down. A friend of mine gets a crop of cosmos in his unwatered gravel every year. And the weeds certainly seem to like growing in the gravel, much to my dismay.

I might enlarge some of the existing holes and use them as planting spots for deeper-rooted plants.

Has anyone done anything like this or have any other ideas?
show more
1 week ago
plants
Questions about the chemistry of building with alker
No, I didn't carry the experiments any further. After I realized that the material was not suitable for outdoor raised beds I stopped working with it.
show more
3 months ago
natural building 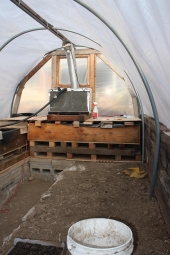 My fan-coil active thermal mass greenhouse is finally operating!
Well, it has been a while. I strained a muscle in my abdomen and haven't been doing my gardening work this past year. But I'm finally ready to start planning my next steps with the greenhouse.

The mouse problem is serious and ongoing. I've decided that the structure simply isn't well sealed enough to be a real year-around greenhouse; critters and pests just build up. (The way I build the retaining wall means that there would be no efficient way to block out critters.)

So I'm planning to use it as a two season (Spring and Fall) greenhouse with a removable cover. During the Summer, I'll use it as a giant trellis for squash and other vines, with shade loving crops underneath. In the Fall I'll put the plastic on to extend some things, then take it back off over Winter to let the cold weather deter pest build-up, and then recover it in the Spring for seed starting.

I'll still use the IBC/Radiator set-up to balance temperatures when the cover is up. When the cover is not up, I'm thinking of using the IBC as a giant Kratky hydroponic tank!
show more
6 months ago
greenhouses
grommets in greenhouse plastic for attaching to wood?
I have a very strong greenhouse plastic with an embedded cord scrim. In fact, it is so tough that when I tried to pull it away from a staple, it wouldn't tear around the staple.

My greenhouse is built of metal hoops with wooden end walls, and the plastic is pulled tight around the edge of the wood and then stapled to it. Right now, I've got trim boards nailed over the wood to hide and strengthen the plastic edge.

The plastic is coming to the end of its lifespan, and I want to attach it differently next time, so that it can be easily removed and replaced.

What if I put small plastic grommets through the edge of the plastic and then drove large headed nails through them into the wood? Do you think this would work?

The way the structure is built I can't easily use wiggle wire channels.

show more
6 months ago
greenhouses
Published an essay based on one of my posts
Thanks Paul and Nicole! That's very helpful.
show more
11 months ago
tinkering with this site
Published an essay based on one of my posts
So a few years ago, I wrote an essay-like blog post. I'm now considering cleaning it up and submitting it to a website for publication, but I don't want to run into copyright problems. I realize that everything on here is copyrighted by Permies.com. The essay would probably be edited significangly fromt he original blog post, but similar enough that somebody could tell the difference. Would this be OK if I included the line "an early version of this essay was posted a permies.com"? Or not?

The post in question is: https://permies.com/t/77697/Disturbance-natural-patterns-principles-permaculture
show more
11 months ago
tinkering with this site
Scaling up leaf curd, my progress
No, I never had time to try to scale it up. Sorry I'm not more help!
show more
1 year ago
food preservation 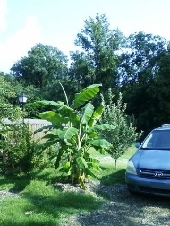 Teach Me Everything I Need to Know About Banana Plants
Most Bananas need 18 months of growth to produce fruit. Each stem grows to a certain size, sets a bunch of bananas, and dies, to be replaced by new stems. The problem is that in your climate, the stem never gets 18 months. You could try to protect enough of the stem through the winter and get Bananas the second year. Some people put a big cage around the stem and fill it with leaves to overwinter the stems. The contraption has to be kept dry so that the stems don't rot.

I'm sure people who have grown Bananas can give you more advice.
show more
1 year ago
gardening for beginners