Advice and tips for new cow owners
I got my first set of cows a few years ago, an angus heifer and a steer. We got them from a Beef herd of 100+ on large acreage. They were a huge headache! Getting out constantly!
In contrast, I got a dairy cow later on who was raised in A pen. Even when the other 2 escaped, she ignored the fence hole they made and stayed in her paddock. An old timer I talked to just said ‘yeah, angus are breachy.’ IMO it’s a mix of breeding and environment that causes them to try and escape all the time.

That said, you’re on the right track with grain-training them! I taught those two wild angus to eat grain by pouring it over something they already ate (alfalfa or hay) until they developed a taste for it. Also, cows like routine. Just keep at it and you will get them to follow you anywhere.
show more
9 months ago
cattle

Depression Era Cooking Tricks
The ‘More-with-Less cookbook’ is my go-to for frugal meals. It is a compilation of recipes from Mennonite missionaries around the world, written in the 70s to encourage less consumption. Most recipes have little notes on them like ‘use 1/2 the sugar and it tastes just as good!’ ‘leftover cooked potatoes can be used for this recipe’
Or on a recipe for a roast ‘put that oven heat to good use with some baked goods for the week ahead.’
show more
9 months ago
frugality

Malus sieversii (apple's wild ancestor) at the Cornell Orchards (Ithaca, NY)
I stratified 16 more seeds this year, but I left them in the back of the fridge and they froze! (I couldn't even open the paper towel they were in.) I thought I had killed them, but so far, 5/16 seeds have radicles!
show more
2 years ago
fruit trees

Malus sieversii (apple's wild ancestor) at the Cornell Orchards (Ithaca, NY)
This is the best of the 5 malus sieversii, about waist high. I must have mistaken it for another kind of tree before, but now that they are budding out it definitely is the same as the other 4.

So amazing to see a completely natural, ungrafted growth habit on a fruit tree! I can't wait to see it leaf out this year...I wonder when it will have blooms? 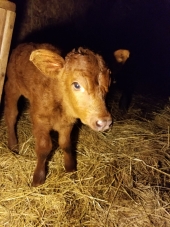 SURPRISE in the pasture
Sire was meat shorthorn. She is still pretty skittish but I have high hopes....
show more
2 years ago
cattle

A 12-day permie challenge
I'm going to use the 12 days to tame my first calf 'Ruby' who will be about a month old on Christmas. I'd also like to train my dogs to herd the cows *calmly*. Hell, maybe I'll even try to halter train Ruby's mama.
show more
3 years ago
projects

My Journey through Fermentation, LAB, Cheesemaking, Korean Natural Farming, Humanure and Bokashi
So, I don't have any answers for you, just some recent thoughts...

Just went down a rabbit hole about Mycoplasma. It's a tiny bacteria that scientists are starting to link to some chronic/terminal illnesses - rheumatoid arthritis, cancer, mad cow, and infertility. Citation = Wikipedia so take this with a grain of salt.

Certainly makes me more inclined to believe the health claims about EM-1 and fermented foods.

Edited to include a non-peer reviewed link: https://rawlsmd.com/health-articles/mycoplasma-the-most-common-lyme-coinfection
show more
3 years ago
composting

Malus sieversii (apple's wild ancestor) at the Cornell Orchards (Ithaca, NY)
So, I went to take a picture and I forgot to mention....the weeds. This is a little embarassing...

It's hard to tell, but there are actually at least 4 Malus Sieversii in this picture. One in the front with one little leaf on top, back to the right with several stalks, straight back with one long stalk, and back left with 2 skinny stalks. Last I checked there were actually 5 of these, but I can't find the last one, hopefully it will pop out in spring.

Now, they are very SMALL (18 inches tall). However, I believe that is from the neglect, because back in 2015 one of the year-old seedlings was about 2-3 feet tall. I'm hoping that a new location with amendments and regular irrigation will work wonders.
show more
3 years ago
fruit trees

I was one of those lurkers who was inspired by this OP. Back in fall 2013 I contacted Cornell University and requested seeds. I stratified 10? seeds in my refrigerator that winter, but after that I'm ashamed to say I pretty much did everything possible to try to destroy them. I left the sprouted seeds in the care of my sister's ex-boyfriend while I lived abroad for a year. When I returned, I planted the coddled seedlings with no protection on property with a resident deer herd. I thought they were definitely goners, as the deer ate them down to nubs. However, they were back again the next two years for a new level of abuse - droughty summers with no irrigation (remember the 50+ days of no rain, PNWers?). I was again out of the country for a month, and left the poor seedlings to fend for themselves. As of August 2017 they were still surviving! Unfortunately I forgot to take pics before the leaves fell off, but I did find these pics from 2014, when they were still in pots.

The rest of the seeds (they sent me a 'small' sampling of 100!) have been in my refrigerator for 4 years. I'm going to stratify some this winter, to hopefully sprout in spring, but I've learned since then that refrigerators really aren't the best place to keep seeds, so we'll see. I'll keep you posted on the seeds and the seedlings come spring.
show more
3 years ago
fruit trees

SURPRISE in the pasture
I hope this is the right place to post this...just wanted to share the joy.

We found this cutie following her mom around 2 weeks ago. Bought mom as a heifer in late February so we got an awesome 2 for 1 deal! Yep, no idea she was even pregnant.

The heifer-calf is doing great, nursing and jumping around. 3/4 meat shorthorn 1/4 angus. I'm gonna try to milk her someday anyways because shorthorn were historically a triple purpose breed!
show more
3 years ago
cattle