When they come to offer you money for a little pipeline
I thought it would be a good idea to add a conclusion of sorts to this thread, although the idea of dealing with mega corporations invoking eminent domain continues elsewhere.

Our fight was successful, in the sense that we delayed the project with court battles long enough and the ACP /Dominion finally had it's moment of internal  truth and sold gas holdings to Warren Buffet who agreed to pay substantial debts   --likely from it's legal battles and  numerous operations done anticipating the construction.  Paying me a lease fee was one of them and The ACP has become a company with only the mission of shutting down and restoring disturbed land to it's previous condition--Warren did not buy that corporation..

The lease  fee I was paid does not have to be returned  and my land will not be disturbed by the pipeline.


show more
3 weeks ago
ethics and philosophy
Curing Cancer
Hi Bryant, I see this is an old thread, perhaps you might update your herb garden contents for us since you mentioned you were in the process of adding.

My "herb garden" is primarily wild herbs and is likely different because of location, the nice thing about natural cures is the best cure for anyone is the one found in their backyard.

I will only mention a couple additional herbs, red clover is one, easy to grow here, really more an ag crop then a garden herb , but when Dr. Christopher (founder of the school of natural healing) was asked for one word associations with each of 100 herbs, red clover was the only one he said cancer for.  Red clover is a blood purifier, and since cancer is primarily a disease from  environmental toxins, purifying the cellular environment reduces the risk of most cancers  and can even help some  cancer tissue heal and revert to normal.

I know the big C scares everyone into chemo, but the master herbalist that ran that one word association list, Richard Schulz, had a very successful practice when he taught at the school, and his experience taught him that he would not even work with anyone doing chemo. Since chemo puts a severe burden on the liver which should be working overtime to detoxify the blood in the first place.(The liver is the primary organ associated with cancer formation, since it's job is to clean the blood) The actual cancer may form elsewhere, but the origin of that cancer lies in it's toxic environment'

To that end, Garlic is one of the best liver herbs around--fresh and raw is best. that's an easy herb to grow with multiple uses.

The idea of a clean vegan diet just to live and maintain health was paramount, and mono juice fasting was also part of the regime..the three Dr. C preferred were carrot, apple, and grape, fresh squeezed, but Dr. C used to say more people had healed themselves of cancer using Welches grape juice than ever squeezed a grape. (sort of a light humor exaggeration of the point --don't get too obsessed with perfection.

One story told was of a woman with a breast cancer open and weeping, the size of a tennis ball, and the hospitals had not treated her since she had no insurance and was quite poor.  Along with the diet, the specific herbal treatment used a shredded poke root poultice (don't take poke internally experimenting with poke on a non professional level can cause SEVERE vomiting-- I've read that chamomile is the antidote, but if I need to vomit I'd use a larger amount lobelia))   Poke has the power to draw toxins out of the tissues and is quite well known for this effect.  The tumor shrank back down to golf ball size, was clean and no longer weeping but showed clearly several tendrils running off into the tissues. At this point they talked with a surgeon friend of theirs because they thought they could speed the healing if they could just get the golf ball out of the way, so he simply grabbed the remaining tumor , twisted and broke it free of the tendrils leaving a crater with tendrils running back into the body.  They continued the poke poultice  and the woman eventually was free of cancer.

Which leads to another herb for the "garden"  although I have yet to be able to coerce it to grow in my garden,  is lobelia, which comes up wild where it pleases.  While not a cancer specific, it has been used as a "lead sheep" in formulas, opening up centers of diseased tissue and allowing other herbal phytochemicals to penetrate more easily.
show more
1 month ago
food as medicine
mink and otter predation, Fish caves?
Thanks, I tend to agree , except for the idea that any fencing is invincible forever, so at the least it would be good to have a backup or two.

The barrel does sound like a good idea,  similar to a built in pipe "cave" I have in mind. how big are the holes in your barrel? how deep is the pond?  Is the water clear or murky?

How did the eagles defeat your defenses?

I have a bigger mud bottom catfish pond, and predation seems less problematic there, but for now the pond is young, and putting young  koi in there just ends up as bigger catfish.  The pond stays pretty murky all year, which may be why the mink didn't just clean it out
show more
2 months ago
predators
mink and otter predation, Fish caves?
I am building a new pond that will generate a fertile wetland as a filtration system. I plan to stock it with Koi etc,and have seen evidence of mink/otter predation in my other mud bottom ponds, and am planning to put in a fish cave as part of the construction.

Knowing how capable mink and otter are in the water, I'm curious if anyone here has any advice /experience, at whether the typical fish cave approach will keep fish safe from  these predators..Or would some specialization of design be in order? IE  how small, long, tight bends in pipe cave construction, etc etc.

Mink will likely be the main issue, but some otter might show up in time.

I haven't installed the liner yet and the pond construction could have all sorts of preventive measures built in. 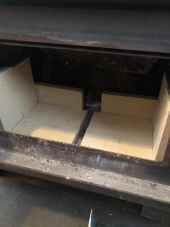 Fire brick question
I agree with the differential heating idea, With gaps in the bricks you are asking those bits of exposed metal to radiate more heat than the covered sections, those bits will also cool faster possibly causing warping or cracking.

Clay is a real easy effective alternative, use the bricks where they will receive the rough treatment of wood being shoved around, and mold the clay in places where it's  receives less  rough treatment.

The nice thing about the clay is it's easily replaced or repaired,
show more
5 months ago
wood burning stoves 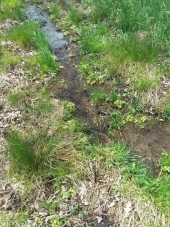 So, i made this...
Your little dam is a nice little watering hole,
What fun you must be having. that's really a beautiful site. congrats on the trees.
show more
5 months ago
wells and springs
Hi, I'm new here and looking to change my life
Yes, welcome, knowing you want a change is the best beginning, before there is a catastrophe and you are simply being swept along with the flood.
This is certainly a good place to start and develop friends and possibly even find the situation that suits you. In the meantime, save your money, develop your skills  and keep your eyes open.

I would be looking at Permaculture courses, some are free online, and develop a new way of organizing your knowledge

show more
5 months ago
introductions
Beavers Damming Flow into My Pond
There are so many things going on here, it's nearly impossible to figure out from a designers point of view, exactly how to approach this.  First of all, 9 feet deep doesn't tell us anything about size and volume. How many fish are we talking about? what are the zoning/permit requirements?  How big is the dam? did you ever see the pond empty?  How much property downstream of the dam do you own? what is located downstream?

You say the dam "appears" to be concrete--if you are unable to say for sure whether it is concrete or not that may be an indicator that you need greater expertise on the scene to evaluate this dam as to whether it is safe enough to keep full.

As was already mentioned, the beavers may be able to save you by taking pressure off the dam. Depending on the situation, if the beaver dam ends up deep enough you may be able to let yours dry up and transfer the fish to the beaver pond as your water level goes down

I do understand not wanting to get into a big project (replacing the dam) while still wanting to maintain it with a quick fix, I have enough to do that is my first instinct as well, but don't let expediency end up costing you heartache, you may lose the fish and a great deal more.

If you still want to ask for diy help here, pictures would be good, overall dimensions, situational details as well. At 1 foot per day loss,that means a muddy hole in about a week  this sounds more serious than beavers blocking the flow of water.
show more
5 months ago
beavers